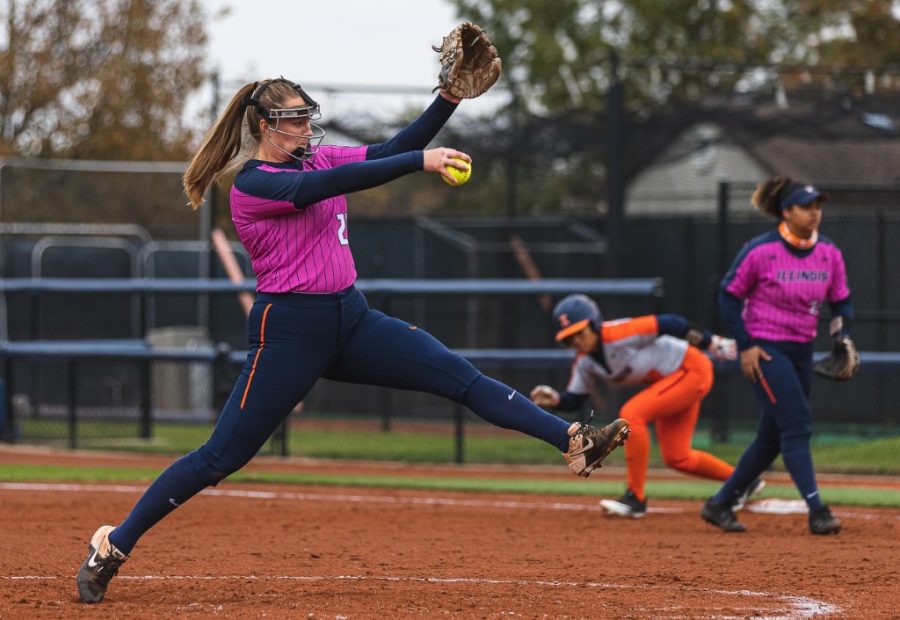 Junior Sydney Sickels pitches in the Orange & Blue World Series at Eichelberger Field on Oct. 25. The Illini had a successful weekend playing against Michigan State and Penn State at the Sleepy Hollow Sports Complex in Leesburg, FL.

The Illini return to Champaign after a successful weekend at Sleepy Hollow Sports Complex in Leesburg, Florida. They played both Michigan State and Penn State, three games apiece, improving their record to 10-2.

They left their last weekend in Florida with only one loss. Going 2-1 against Michigan State and sweeping Penn State on the softball diamond 3-0.

Three weeks into the season and they find themselves in second place in the Big Ten conference. It’s evident they’re playing together as a dynamic powerhouse striving for each victory. Nine is better than one, and that’s exactly how the Illini play. Encouragement, motivation and perseverance are key components that this team focuses on to better themselves and uplift each other.

“I think the biggest reason as to what makes this team so successful is the fact that we work together and play for each other, instead of playing for each of us as individuals. We play for the team,” said Sydney Sickels. “I think this is what is going to carry us really far this season.”

The Illini dominated with their fielding, hitting, and pitching. Senior Katie Wingerter; juniors Sydney Sickels, Averey Steiner, Kailee Powell and sophomore Delaney Rummel each had outstanding performances along with the team as a whole.

In their last head-to-head against Penn State, Illinois defeated them 8-0. The offense accounted for 11 hits, wrapping up the weekend with successful victories. Utility player Rummell, who had a really hot start as a freshman but didn’t get to play last spring due to COVID-19, went 2-for-3 with two RBI’s; she hit a two-RBI double to left-center, followed by an RBI single down the left-field line by infielder Wingerter. She then went 2-for-3 with an RBI to end the game.

Illinois pitcher Sickels, dominated both Michigan State and Penn State’s offense this week. Sickels shut down the Spartan offense as she allowed no earned runs on just three hits while striking out a season-high 11 batters.

She kept hitters off balance as she faced Penn State’s offense. This was one of many accomplishments for Sickels this week. She pitched a perfect first game against Penn State going into the top of the seventh, setting a new innings pitched (IP) high of seven and allowing zero walks and one hit.

The Illini are looking to maintain their winning streak as they persist into their upcoming games the weekend of March 26-28. They hope to break Minnesota’s streak of six.

“Our goal for Minnesota is to go out there with confidence and really try and get ahead on them early,” said Sickel. “Something that we’ve been talking about recently is just imposing our will, showing that we are the better team, and we are able to go out there and win each game.”