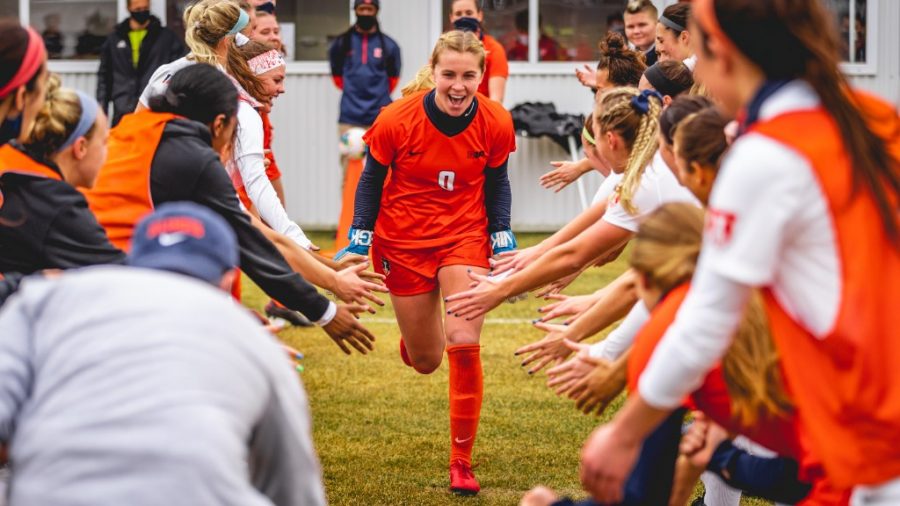 Sami Sample runs through a tunnel of teammates before a game against Penn State on Feb. 28. Sample was recently awarded player of the week by College Soccer News.

On Mar. 14, College Soccer News announced that the Illinois soccer goalkeeper Sami Sample was their Women’s National Player of the Week.

College Soccer News each week recognizes both a male and female college soccer player who have been a key role in their teams’ success in that given week.

“Sample has been a cornerstone during the spring season as a key ingredient in a tenacious Illini defense that only allowed a total of three goals to date,” College Soccer News said.

The South Elgin, Illinois, native, with the help of the defense, earned a shutout in the win against Indiana 1-0. Sample recorded eight saves that afternoon, proving to be a problem for the opposition to get the ball past her.

This season Sample has started in every game for the Illini playing the full 90 minutes and then 110 minutes against Minnesota. Prior to the 2021 campaign, she only played roughly 14 minutes in 2018 against Southern Illinois University Carbondale.

Currently Sample is one of the best goalkeepers in the Big Ten stat wise. She has four shutouts, 36 saves and a save percentage of .923.

The only goals she has allowed in are two against Penn State and one against Wisconsin. In a match up in early March against Minnesota, Sample saw a season high game for her. Facing 23 shots from the Badger offense and recording nine saves to keep the game a tie through double overtime.