Illinois bounces back with series win at Minnesota 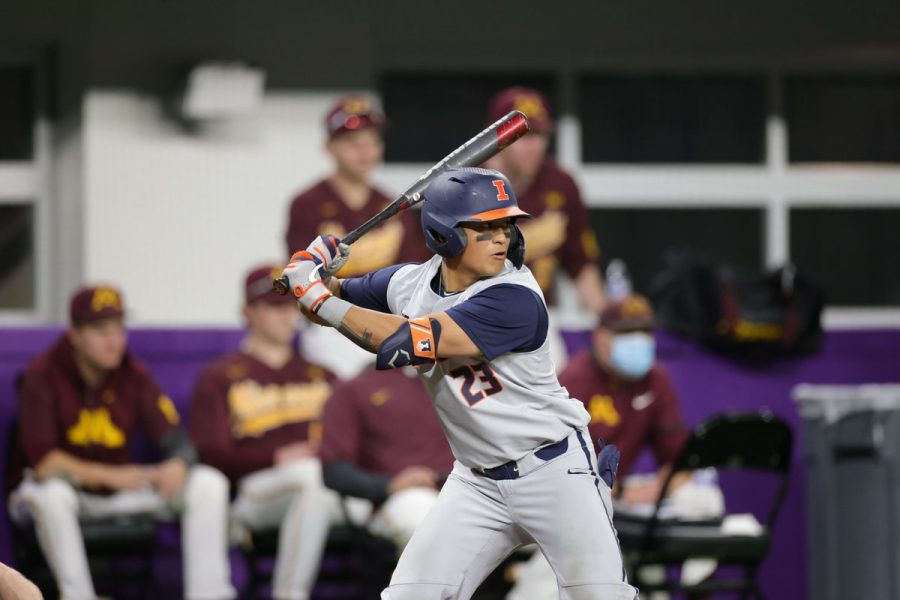 Branden Comia prepares for a pitch during the game against Minnesota at U.S. Bank Stadium on March 13. The Illini won the series against the Golden Gophers and are now 4-4 this season.

After not earning a win until the last game on opening weekend, Illinois baseball headed into Minnesota with some momentum and used it to win the first three games of the series. Led by Ryan Hampe, Cameron McDonald and Jacob Campbell, the Illini offense thrived in Minneapolis, resulting in a 6-1 win on Friday and 11-8 and 7-1 wins on Saturday.

While the Illini dropped their final game of the weekend, 5-3, assistant coach Adam Christ still saw major improvement throughout the weekend, appreciating the energy his team gave from the jump.

“It was a good step,” Christ said. “I know we dropped the last game on Sunday, but (I’m) really proud of them, the fight. It kept coming to the end. We ran out of some outs, but they kept fighting and clawing their way, and we had some opportunities. Jacob Campbell, really good weekend for him. He swung that bat really well; Jackson Raper swung the bat really well.

“We’re starting to find guys 1-9; there’s no letup in the lineup. When we can get balance 1-9, we know the pitcher doesn’t have a chance to take anything off.”

The Illinois pitching staff had a more disciplined weekend, allowing just 15 total runs compared to the 24 they gave up against Ohio State. The group also recorded 30 strikeouts over the weekend, with 13 of them coming in the extra innings win on Friday.

Andrew Hoffman set the Illini on the right path Friday night, pitching 6.2 innings and giving up just one run on three hits in the win. Hoffman struck out nine batters, crediting his off-speed ball. Nathan Lavender and Ryan Kutt added scoreless innings in the win. Hoffman believes the staff as a whole was more relaxed against Minnesota after having a week to learn from initial mistakes.

“It’s another thing of comfort for guys who are getting the first opportunity on the mound at this level and getting more acclimated as pitchers.” Hoffman said. “Having the first weekend to look back on and see, ‘Oh yeah, I did this well, I didn’t do this well,’ and be able to go out a second or third time and know what they’ve got to do.”

While game one was more of a defensive battle, with the Illini and Golden Gophers scoreless through six innings, Hampe gave Illinois the 1-0 lead with a bomb to left field. Minnesota tied things up in the bottom of the seventh, but in the 10th inning, Illinois scored five runs to put the game away, led by a single from Nathan Aide. RBI singles from Kellen Sarver and Raper sealed the win.

“(Hampe) struggled a little bit weekend one, just rushing himself trying to do too much,” Christ said. “He got back to being more patient and not chasing so many balls in the dirt, seeing things up. He knows the strike zone well and had the ability to stay on some baseballs this weekend and had a really good weekend for us.”

The momentum carried into Saturday, as the Illini came from behind in the first game of the doubleheader, scoring runs in innings two through six to come up with the win. Riley Gowens earned the win, throwing four innings and allowing just two runs. He struck out seven batters in his first career win.

Illinois led 3-2 after the fourth inning, but singles from McDonald, Hampe and Andrew Kim, along with doubles from Raper and Danny Doligale, broke things open with six runs scored in the fifth inning.

McDonald was the driving force behind the win, going 4-for-5 while hitting two RBIs and scoring three runs.

Game two of Saturday’s doubleheader was another Illini-dominated outing. Ty Rybarczyk earned his first win of the season by pitching seven innings and allowing only one run. Balanced offensive efforts from Doligale, Campbell, Raper and Justin Janas — who all recorded two hits — led to scoring in four different innings. Campbell’s two-run homer headlined the night.

“We have a good group,” McDonald said. “Not everyone is going to hit at one time, but everybody on our team can contribute offensively in some way. Like if one guy is struggling, there’s other guys that are going to pick him up.”

Sunday was Illinois’ only misstep of the weekend, as Cole Kirschsieper picked up his first loss as an Illini, giving up five runs, including back-to-back home runs in the fifth inning.

While Campbell had another impressive outing, going 4-for-4 and hitting another homer, the Illini struggled to capitalize on base runners late in the game, resulting in the first and only loss of the weekend.

“I thought we came out a little bit flat on the Sunday game, and I know it’s really hard to beat a team four times in a row,” McDonald said. “But that’s what we’re striving for because it’s going to be tough to get in the tournament this year without playing non-conference games, so we have to figure out how to win those ones, too.”

Illinois travels to Michigan this weekend to take on the Wolverines and the Spartans, playing two games against each team.