Illinois aims to pick up road wins against Indiana, Purdue 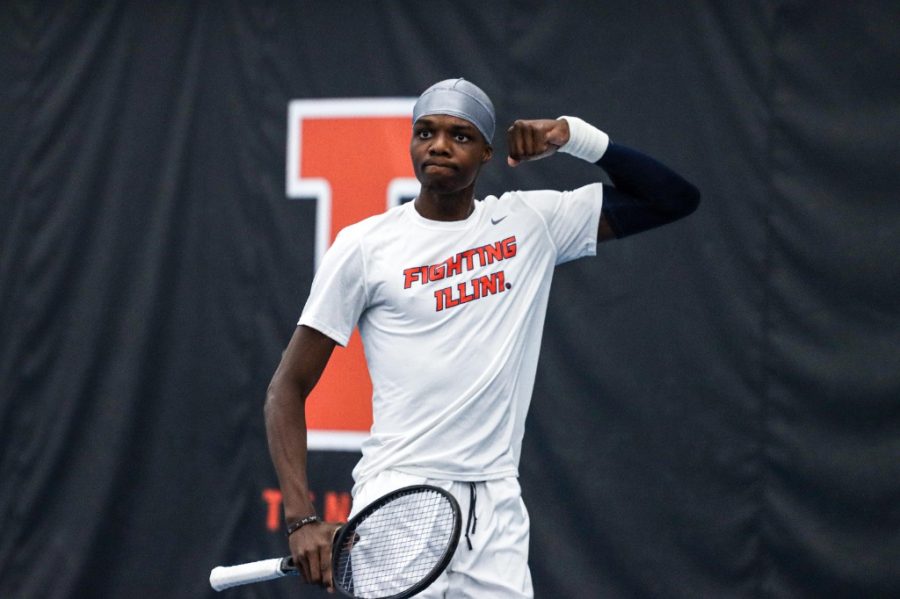 Kweisi Kenyatte celebrates after a play against Northwestern on Sunday. The Fighting Illini are getting ready to compete against the Purdue Boilermakers this weekend in Indiana.

With the wild Midwest winter season drawing to an end, the Illinois men’s tennis team will play its weekend matches at Bloomington and West Lafayette, Indiana, outside — granted, the weather cooperates.

Outdoor tennis has a different feel than indoor tennis. Uncontrollable factors require players to be meticulous with details, as they need to factor in the sunlight to their view and the wind to their hits. In any case, it’s an adjustment. Head coach Brad Dancer got the team out on the courts the past couple of practices to help them readapt to the rhythm of outdoor play, all the while reminding them to remain focused on the fundamentals.

Illinois played the majority of its matches inside Atkins Tennis Center, making its Friday trip to Indiana the third away match of the season. Indiana holds a record of 3-4 after sweeping Purdue (4-0) last Saturday.

Following a day of travel, the Illini will return to work Sunday against the Boilermakers. Purdue appears to be in a scoring drought, as its record sits at 1-6. Though Illinois will enter the weekend with a 9-2 advantage in record, numbers aren’t everything and circumstances are different, especially when playing away.

During the team’s off day on Monday, junior Kweisi Kenyatte reviewed film from last Sunday’s match with Northwestern, where the Illini pulled off a 4-1 victory. Dancer and his guys will need to clean up their play executions and solidify their doubles play over the next couple of prep days to take on their upcoming opponents.

“I think it will be a great, hard-fought match,” Kenyatte said. “I don’t wanna jinx anything, but I think we will come out on top of both of those. I can say that confidently I believe in this group of guys. I believe in our talent. I believe in our work ethic.”