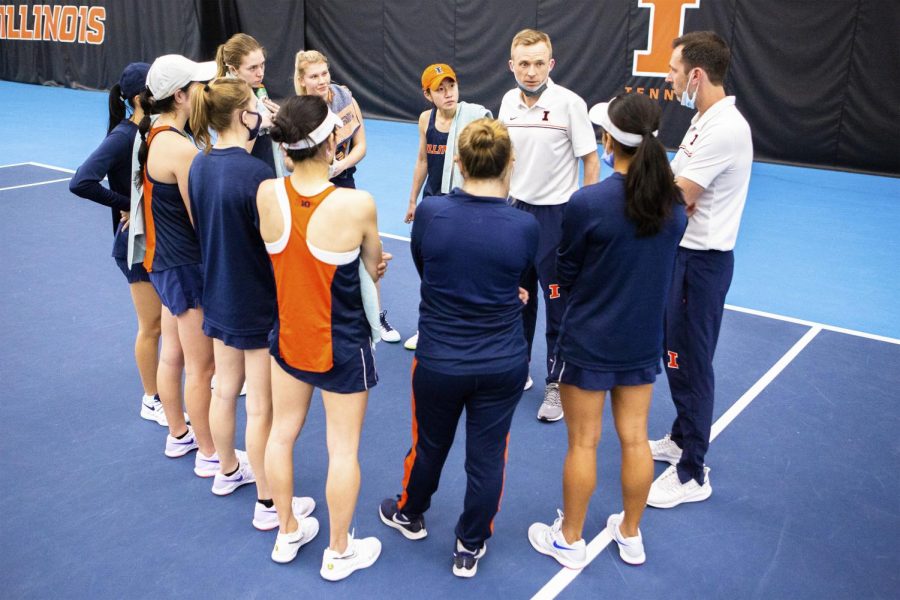 The Illinois women’s tennis team huddles around head coach Evan Clark before their singles matches against Wisconsin on Feb. 26. The Fighting Illini are hosting Purdue and Indiana this weekend at Atkins Tennis Center.

This weekend, the Illinois women’s tennis team will host Indiana and Purdue at the Atkins Tennis Center.

The Illini split their Big Ten doubleheader last weekend, with a win against Iowa and a loss versus Nebraska, as the team sits at 3-6 on the season.

After the successful weekend against two of the top teams in the Big Ten, head coach Evan Clark is pleased with the team’s recent success and hopes to build on the momentum.

“If you look at our last matches, we are 3-6, and we could have easily won that fourth match as well,” Clark said. “So we have a lot of momentum based on the way we started the year.”

Illinois begin their weekend facing off against the Indiana Hoosiers on Saturday, who come to Urbana with a 1-8 record, currently on a five-match losing streak.

Earlier in the year, the Illini faced off against the Hoosiers at the Illinois Invitational. At this event, no team scores were kept, only the individual records. In these matches, Illinois won six of the seven individual matches, and the two sides split the eight doubles matches evenly.

On Sunday, Illinois welcome the Purdue Boilermakers to the Atkins Tennis Center. Purdue comes in with a 3-6 record after a win-loss weekend against Minnesota and Wisconsin.

After struggles at the beginning of the year, Illinois has been steadily improving so far this season, and with a pair of wins this weekend, they would inch even closer to the .500 mark on the year.

“We have improved so much in such a short period of time,” Clark said. “Having these markers as we go, remembering where we at a month ago, two weeks ago, and every time we talk about it, we’ve seen how much we’ve grown up.”