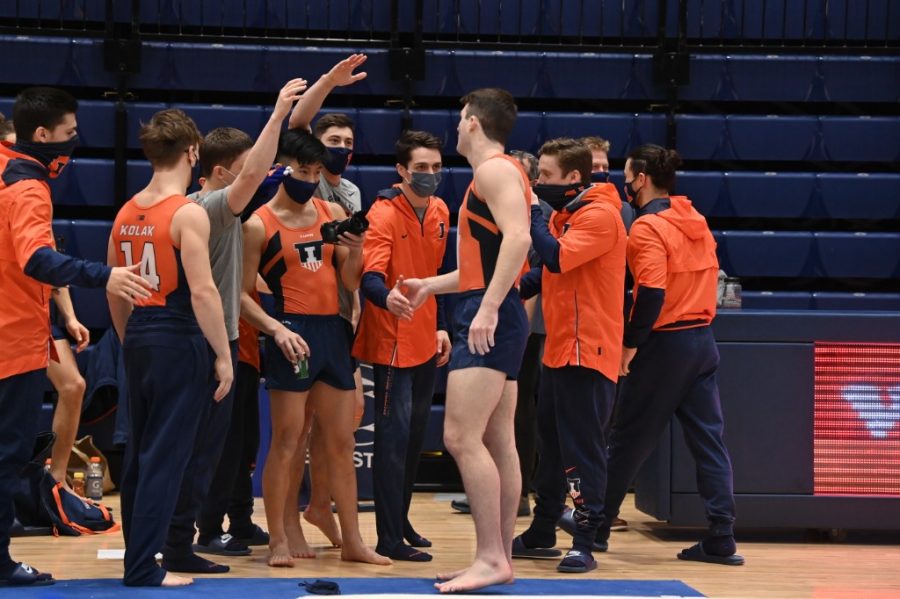 The Illini men’s gymnastics team joins a huddle during a meet against Penn State on Jan. 31. The Illini recently competed against, and assumed a narrow win over, the Minnesota Golden Gophers on Monday.

The Illinois men’s gymnastics team faced Minnesota on Monday night for the final regular season meet in the more than 80-year history of the teams’ series. Aside from the unfortunate context of the meet, both teams were hoping to end their regular seasons with a win and enter the postseason with some momentum.

“It turned into a battle,” said head coach Justin Spring. “It was a meet we could’ve given away, but we didn’t. So, I’m really proud of the guys for that.”

Illinois had a rocky start to the meet on pommel horse, scoring 62.200, which is four points lower than its team season-high on that apparatus. But Minnesota had an even worse pommel horse rotation, scoring 58.400. Combined with a decent floor exercise rotation, Illinois led Minnesota by five points after the first two rotations, a lead Illinois wouldn’t surrender for the rest of the meet.

“We both had terrible pommel horse days,” Spring said. “I certainly didn’t expect them to do that. Minnesota could’ve easily gone five for five, and we could’ve lost this meet by seven points because of that. We opened a door, and they opened the same door for us.”

Graduate gymnast Danny Graham usually dominates on still rings, but he uncharacteristically finished in sixth place, something he attributed to the three-week break he had after he contracted COVID-19.

“Not my best stuff,” he said. “Taking more than three weeks off, that doesn’t help, especially with rings. I’m happy I got to do the routine, but there’s a lot of work to be done.”

Though Illinois led by almost 10 points halfway through the meet, Minnesota would chip away at that lead for the remainder of the meet. Entering the final rotation of the meet, with Illinois on parallel bars, the lead had shrunk to 1.3 points. Illinois’ performance on parallel bars has been somewhat of an issue all year, but the team performed well, and thanks in part to a career-high 13.600 from senior Joel Diaz, Illinois held on for the one-point victory.