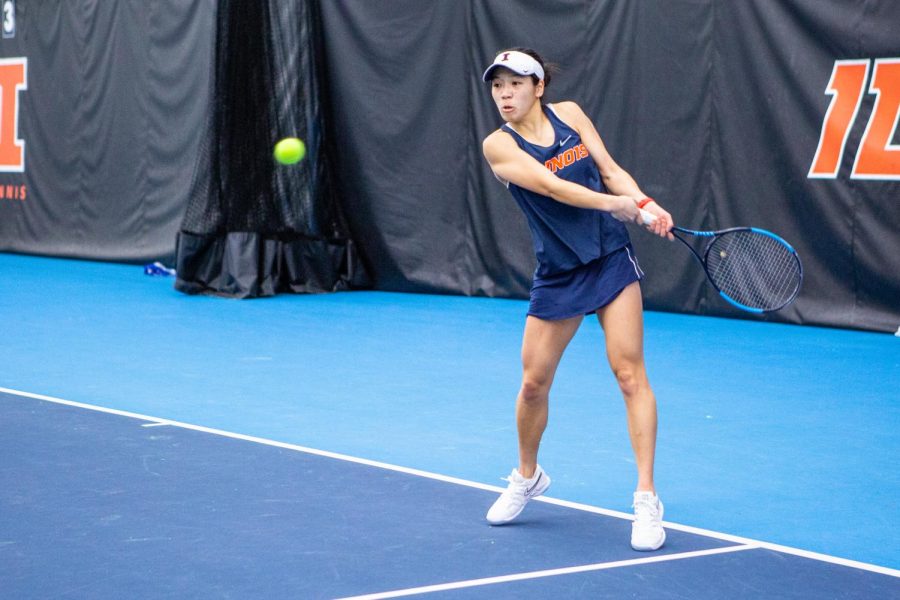 Senior Asuka Kawai begins a backhand swing during a match against Wisconsin on Feb. 26. The Fighting Illini women’s tennis team is scheduled to play Wisconsin and Minnesota this weekend in their respective cities.

Coming off a pair of wins last weekend, the Illinois women’s tennis team is back on the road. The 5-6 Illini are traveling north for another set of Big Ten matches against the Wisconsin Badgers and the Minnesota Golden Gophers.

Illinois begins its weekend play on Friday against Wisconsin at noon central time. Wisconsin comes into the matches with a 7-6 record after losing to both Nebraska and Iowa last weekend. The last time these two teams met, it was the Badgers who were victorious over the Illini, 4-3, on Feb. 26 in Urbana.

Head coach Evan Clark is happy about the progress the team has made recently, but he realizes this match is not only an opportunity for revenge but a chance to get back to the .500 mark.

“We lost to Wisconsin already this year, and it left a little bad taste in our mouths,” Clark said. “We did not play well that day, but credit to Wisconsin for coming and beating us; they’re a good team.”

Though Wisconsin got the better out of Illinois earlier in the season, the Illini have won eight of the last 10 matchups against the Badgers and lead the all-time series, 21-3.

After facing off against Wisconsin on Friday at Nielsen Tennis Stadium, Illinois will make the drive up to the Twin Cities to play against Minnesota at the Baseline Tennis Center. The match play will begin at 10 a.m. central time on Sunday.

The Golden Gophers currently boast a 3-8 record on the year after dropping back-to-back matches last weekend against Iowa and Nebraska. These two schools previously met this season on Feb. 28 in a matchup that saw the Illini emerge victorious, 4-3.

In the previous matchup, Illinois and Minnesota split the singles competitions, but through the doubles teams of Josie Frazier and Asuka Kawai, along with Sasha Belaya and Emilee Duong, the Illini came away with the win.

After a lengthy homestand, the team is eager to prove themselves on the road and continue to build on the momentum before the Big Ten Tournament in April.

“I think we’ve felt really confident over the last stretch of matches,” Clark said. “But Wisconsin and Minnesota are very good, and they’re even better at home.”