Illinois shuts out Michigan, Michigan State with contributions from all players 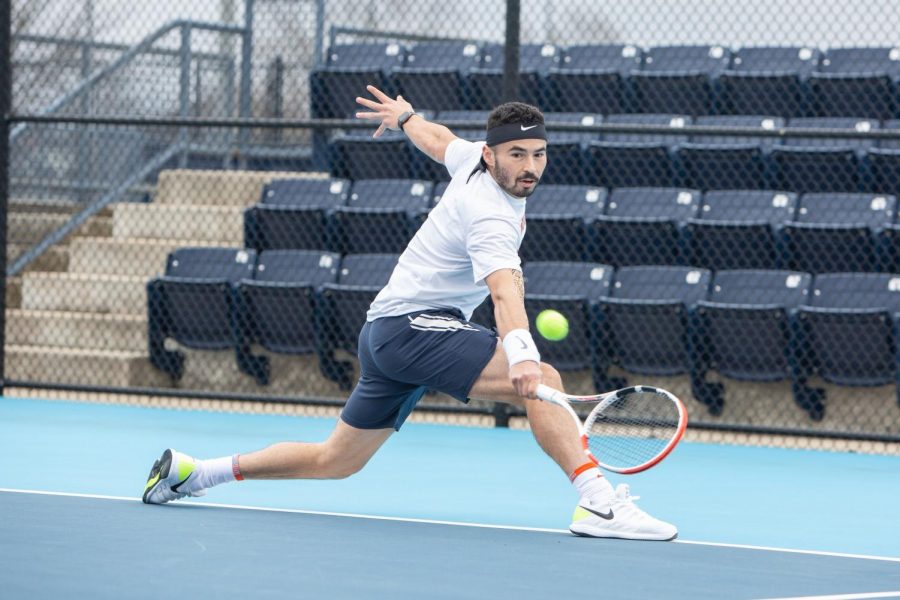 Senior Noe Khlif lunges to hit a ball during a match against the University of Michigan on Friday. The Fighting Illini men’s tennis team have reigned in eight consecutive wins with their most recent being against Michigan and Michigan State this past weekend.

This weekend, the Illinois men’s tennis team welcomed Michigan and Michigan State to Urbana and sent both of them back on the road with big losses.

In a 5-2 victory, Illinois snapped Michigan’s eight-win streak and served the Wolverines their first conference loss. Head coach Brad Dancer said he was pleased with the “all hands on deck” display of effort.

“You know, you talk about team victory, but that was really the definition of it on Friday,” Dancer said.

The Illini gained the early lead when Siphosothando Montsi and Noe Khlif won 6-3 at the No. 2 doubles spot. At the No. 1 spot, Alex Brown and Zeke Clark clinched the doubles point, 7-6 (5).

Illinois and Michigan split the first four singles matches 2-2. Playing in his first match back from the Cleveland Challenger, Aleks Kovacevic won his match 6-3, 6-4. The Illini then garnered a point from Khlif, who won his match 6-2, 7-5. Michigan earned its two points on courts three and six, with Brown and Hunter Heck unable to edge past their opponents.

Montsi dropped his first set (6-2), which he has only done four times this season.

“After I lose the first set, I don’t really think too much about the fact that I just lost,” Montsi said. “I just try to move past that and stay in the moment — not get too far ahead.”

In the second set, Montsi and his opponent were neck and neck until he took the 4-3 lead after delivering a forehand that forced a net ball return. Soon enough, Montsi won the second set (6-3) on a break point.

With both players itching to take the lead, the third set finished in a hard-fought manner. Things were looking up for Michigan at first, but Montsi swung his way to the top, sending his opponent lunging from one end of the court to the other in nearly every play. Montsi wrapped up the “frustrating” match (6-3) and extended his undefeated start to the season to 11 matches.

The last match of the day belonged to another undefeated player: Clark. Throughout the match, neither Clark nor his opponent could muster up enough momentum to shake each other off. Both the first and second sets entered into a tiebreaker, but Clark hung on. He extended his win streak to nine and delivered the final blow to Michigan’s loss, beating his opponent 6-7 (3), 7-6 (5), 10-1.

“My match was a crazy one,” Clark said. “We had a back and forth first set, and he actually got up pretty big in the second, but I clawed my way back. My teammates, my coaches gave me a lot of fire, and they were behind me the whole way. That gave me a lot of confidence, and I just stayed with it.”

On Sunday, Illinois retook the courts — inside Atkins Tennis Center this time due to the weather — to face Michigan State where they came out with their second 7-0 sweep of the season. Just as the match prior, the Illini grabbed the doubles point with the duo of Montsi and Khlif winning 6-1 and the pair of Brown and Clark winning 6-0.

In singles play, all but one match ended in straight sets. On court two, Brown and his opponent tailed each other throughout their three sets, as neither player could get ahead by a substantial margin. Ultimately, Brown persevered and defeated Williams 6-4, 5-7, 11-9.

“To come out and beat any Big Ten team 7-0 is obviously a big credit to the guys,” Clark said. “It’s not an easy task to do, and Michigan State is playing some of the best tennis that I’ve seen them play in my time here — they’re a tough team.”

With its eighth consecutive team win, Illinois improved its record to 12-2. The last two home matches of the season will be played at 3 p.m Friday against Wisconsin and at noon Sunday against Minnesota.