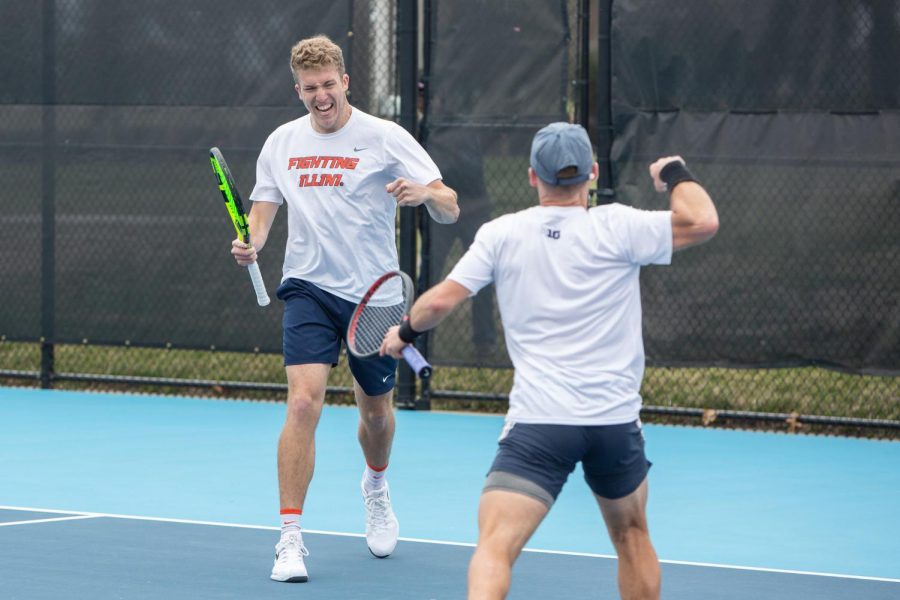 Redshirt junior Alex Clark and senior Zeke Clark celebrate after winning a point against Michigan on Friday. The Illinois men’s tennis team will face Wisconsin and Minnesota this weekend as they move closer to competing for tournament titles.

As the matches in the regular season dwindle to six, the Illinois men’s tennis team moves closer to competing for tournament titles. But before Illinois can focus on its postseason, it will face Wisconsin and Minnesota this weekend with plans of solidifying and improving its game.

Ahead of this weekend, No. 12 Illinois played Wisconsin twice in February and won 6-1 against the Badgers both times. The same weekend of their second win against Wisconsin, Illinois went head to head against Minnesota and won the match up 5-2. This time around, Illinois enters the match with eight consecutive wins, while Wisconsin struggles to find consistency in singles play, and Minnesota attempts to extend its three-game winning streak supported by its doubles duos.

Though the Illini have bested both their opponents before, head coach Brad Dancer doesn’t think calculating wins based off previous encounters ensures victory.

“I really don’t speculate at all in terms of that,” Dancer said. “I think we’re gonna go out and do the best we can and prepare the best we can. I think we got big goals for this team and next thing in front of us is Wisconsin, and so we gotta have everybody focused and dialed in on how they best prepare to play that match.”

The “big goals” Dancer alluded to are the team’s anticipated run in the Big Ten and NCAA tournaments.

“We’ve got a good enough team, and I think we’re in (a) position where talking about trying to win a Big Ten championship is not an unrealistic thing,” Dancer said. “I think … we’re ready to play with some of the best teams in the country, and we’ve already shown we can do that in indoors, so there’s no reason we can’t have really big goals.”

A good chunk of the Illini’s successes out on the court has come from two undefeated players, who both have added on an extra year of NCAA eligibility because of COVID-19: Siphosothando Montsi and Zeke Clark.

In his third year, Montsi has had quite the season. On Tuesday, Montsi was presented with his second Big Ten Player of the Week accolade, which serves to recognize his growing 12-0 record.

“To be honest, I try not to focus too much on my own personal record,” Clark said. “All I care about is making sure I’m good to go every match, making sure our guys are good to go. All I care about is the team winning, and the best way for me to help the team out is to put my point on the board, so I go out there and focus on my match … and you know, the record book will take care of itself.”

The work these two players have consistently put into their craft hasn’t gone unnoticed by Dancer.

“I thought those guys have done a great job so far this season,” Dancer said. “Needless to say, their records speak for themselves. But they’re both hungry. They’re hungry for more, too. They wanna keep getting better, keep going with their game, and I think that’s really, really important.”

The Illini will play the Badgers at 3 p.m. Friday and the Golden Gophers at noon Sunday at Atkins Tennis Center.