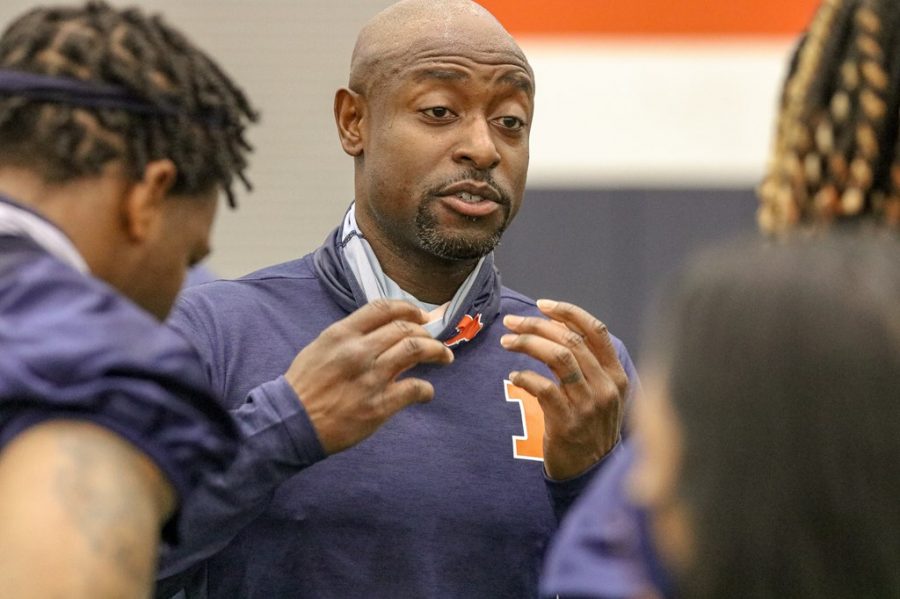 Illinois running backs coach Cory Patterson runs through a drill with a few players. Patterson is coming up on his fourth season with the Illini and is the only coach Bret Bielema kept from Lovie Smith’s staff.

Illinois football running backs coach Cory Patterson was the lone coach retained by Bret Bielema from Lovie Smith’s coaching staff. Patterson is moving to coaching running backs after spending the past three years with the tight ends. He is adjusting to not only a new coaching staff, but to a new group of players in his new position as well.
Bielema has shown he wants to have an almost brand-new start for the players as far as coaches go, but he has expressed excitement when announcing Patterson would be staying in Champaign.
For Patterson, the decision to stay wasn’t difficult either. He played an important role in recruiting over the past couple years, but he was even more impressed with what Bielema brings to the table for Illinois.
“He shows it every day,” Patterson said. “The way he talks with his players, the way he interacts with us, he’s the type of guy you wanna coach for. You sit around him and not get anything done ‘cause he’s always working his tail off. I mean that’s the beautiful thing.”
Patterson also commented on the new staff as a whole, and he mentioned how great it’s been to work with his new colleagues.
“It’s been a lot closer,” Patterson said. “The group as a whole, this staff, everybody seems to work together real well. Coach B did a phenomenal job of personalities together. He found guys that not only work hard but are gonna work hard together.”
Patterson also noted that his job as a recruiter has gotten easier, crediting Bielema with his recruiting efforts and complimenting his work so far.
However, what is changing for Patterson is the players he’s working with. He knew most people on the team already from being around for three years, but Patterson was primarily working with tight ends.
Now, as a running backs coach, Patterson moves to a new group of players  he hasn’t done much work with. Having been the head coach of Trinity Catholic High School before joining the Illini, he’s confident his experience with coaching multiple groups will work in his favor this year.
“Being a high school coach, you coach almost every position,” Patterson said. “What changes is the little nuances of the position.”
Another benefit Patterson has by moving to the running back group is that he is joining a very skilled squad of rushers.
Chase Brown had a breakout sophomore season in 2020, and younger names such as Reggie Love, Jakari Norwood and Chase Hayden are other backs he can use in his system. Despite uncertainty about one key back, Patterson is enjoying the new group he’s working with and said the group is working together nicely.
“I tell them that this room is our room, it’s not my room,” Patterson said. “That’s a serious room. Those guys push each other. Great group, I don’t think I could have asked for a better situation.”
Junior Mike Epstein is the one running back with uncertainty around his name, as he is yet to make a decision. Epstein, though, is a difference-maker in multiple ways.
Three season-ending injuries later, Epstein had a solid 2020 season and will surely make a difference on the field if he comes back for the fall. His presence in the locker room, though, is also very important to the Illini.
“For us, we want Mike back, but it’s up to him on the decision he has right now,” Patterson said. “Any room is better when you got a Mike Epstein in it.”
Even if Epstein doesn’t stay, Patterson has a great group to work with. And with this new group of players comes a change in culture, something multiple players have alluded to so.
Each player that’s been asked about the new coaching staff has said that something feels different in the locker room, and Patterson agrees. The new culture of the team is a new look for the Illini, and Patterson is all for it.
“The family deal, when everybody hears it, it feels like a trending thing, but it really feels that way in this building,” Patterson said. “When you walk in here it feels completely different. … It’s just a huge change.”
Patterson will get his first in-game experience as running backs coach on April 19 during the annual spring game.