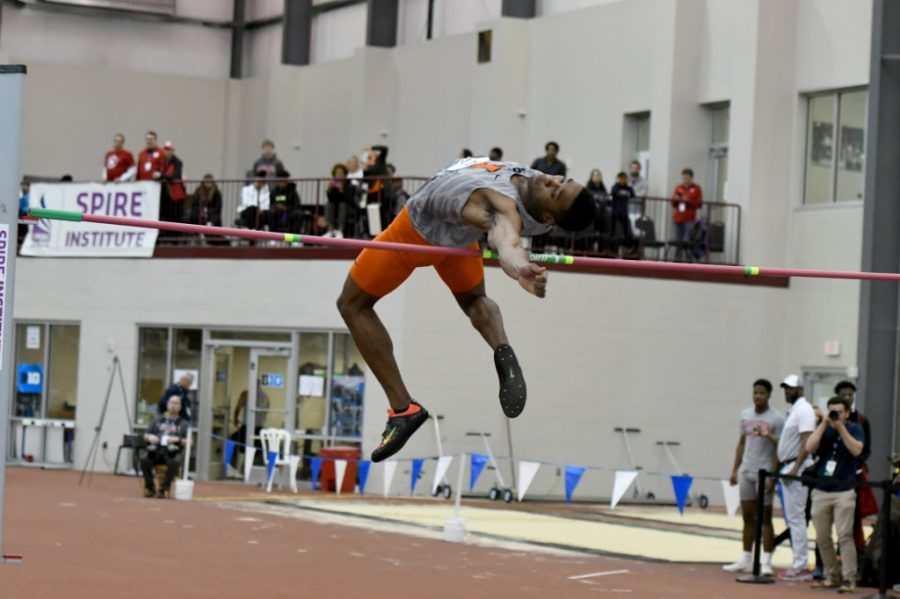 The book “Outliers” by Malcom Gladwell examines how Bill Gates became one of the richest men in the entire world. Was it because he’s the smartest man alive and had the greatest business model ever? While both of those have some truth to it, Gates’ environment growing up — such as having wealthy parents who connected him with International Business Machine as a child — played a part.
Illinois track and field star Jonathan Wells is one of the most talented jumpers in the nation, having just won two jumping titles in Jacksonville this past weekend. But as the six-time All-American makes note when discussing one of his favorite books, “Outliers,” he only has so much impact on his own success — though he may be shorting himself with factors he had to deal with.
“Everyone sees the results but not the story,” Wells said.
Wells is old. After graduating high school in 2014, the Fox Lake, Illinois native made the move down to Champaign-Urbana, immediately securing a spot as one of the best athletes on the roster. The 2014 state champion in high jump and long jump finished fifth in the conference while qualifying for the NCAA championships as a freshman.
But the athlete recognizes that was a long time ago. Due to family emergencies and an extra year of eligibility granted due to the pandemic, Wells is enjoying his sixth year of eligibility at Illinois while taking advantage of completing his Masters in business administration.
“For sure,” Wells said regarding whether COVID-19 was a blessing in disguise. ”I always feel that situations happen for a reason, and you can learn for opportunities to grow. COVID has navigated me to get my MBA and train for the Olympic trials.”
Though Wells has become a premier talent in the country, he doesn’t give himself credit for his incredible, steady improvement from an already impressive starting point. Instead, Wells acknowledges the opportunities given to him and chalks up the success he had because of a strong supporting cast.
“I am not as talented as I am on paper without my coaches and teammates,” Wells said. “You can have potential, but it’s how you exploit that potential and unlock it.”
While Wells credits his coaches, teammates and his dietician for unprecedented success as a member of the track & field program, what Wells’ progressive experiences through college has granted, can’t be chalked up as another big advantage.
Amid his junior season, Wells’ father, Sean, was diagnosed with brain cancer, and he struggled with the impact of chemotherapy. Wells couldn’t stand by and continue a track and field career. He took time away from school so he could go back home and become a caretaker for his father.
“I didn’t know it would be three months, and six turned into nine and nine turned into a whole year,” Wells said.
His patience was tested, and his athletic ability faced the possibility of dipping alongside his desire to try for the Olympic trials. Even as Wells said putting his life on pause was extremely difficult, he knew he needed to help out a man who had such a significant impact on his life.
Wells’ dad, despite battling a deadly disease, didn’t allow the cancer to destroy his outlook on life. While he never stopped battling, Sean continued to say, “never give up,” a phrase his son has used to further his career on and off the track.
Sean unfortunately passed away after his battle with brain cancer, but his impact lives on with his son. After the death of his father, Wells got permission to make a T-shirt with the track program that had his father’s famous phrase on it, alongside a cancer symbol.
“After he passed away, he wouldn’t want life to be stagnant,” Wells said. “He wants you to use your God-given talent, so I came back into the sport.”
Despite taking a year away from the track, Wells faced little-to-no fallback as a Big Ten athlete. In a COVID-19 shortened year, Wells finished in the top five in both high and long jump, securing first place in the conference in the high jump.
With the passing of his father, combined with a global pandemic, Wells’ collegiate career has been extended through unparalelled hardships. But instead of gaining fatigue, Wells has taken advantage of opportunities given to him and even had to battle the toughest event of his life.
Wells has written one-thousand-word essays to appeal for an extra year of eligibility. He’s taken time out of his career to help his beloved father, and he’s combined it with the workload of trying to complete an MBA. Wells can claim outside factors have contributed to his success the most, but this Illini of the Week honoree took matters into his own hands and paved his own path toward a very successful career after college.
“God has been leading, and I’m glad to be here,” Wells said.