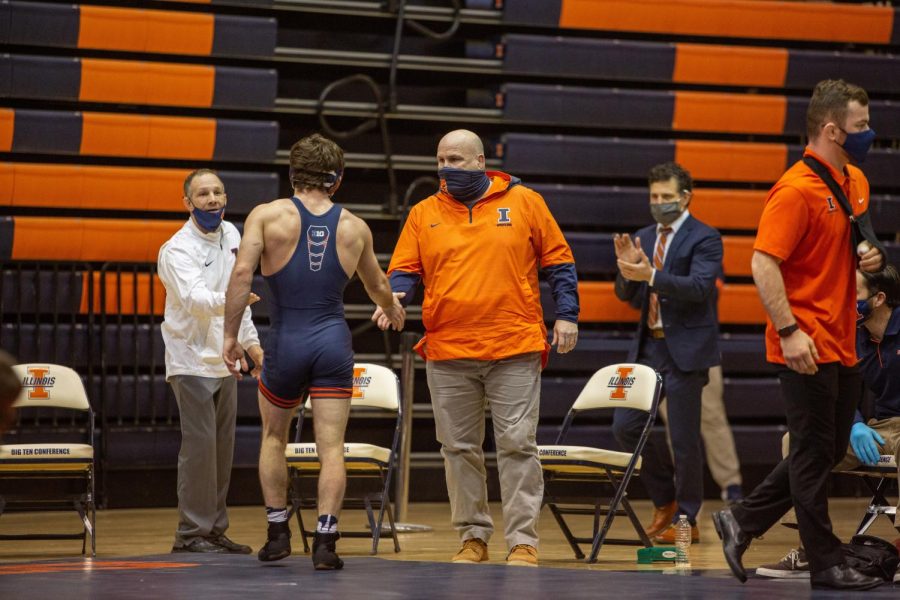 Illinois head wrestling coach Jim Heffernan shakes the hand of a wrestler after a match against Purdue on Jan. 22. Heffernan has just announced his retirement after 29 years in the Illinois wrestling program.

After a combined 29 years with the University of Illinois wrestling program, head coach Jim Heffernan has announced his retirement.

During his time with the Illini, Heffernan led the wrestling program to a whopping 13 Top-10 finishes at the NCAA Championships. While in Champaign, he had the pleasure of coaching not only 73 All-Americans but 11 individual NCAA champions.

One of the recent standout athletes from his coaching career was Isaiah Martinez. Martinez achieved a 35-0 record during the 2015 season, the first wrestler to go the length of the year unbeaten by a freshman since 1999. And during the 2013 and 2014 seasons, Heffernan coached Jesse Delgado to consecutive NCAA titles.

Prior to his role as a coach, Heffernan attended the University of Iowa. He was a four-time All American with the Hawkeyes, putting together a career record of 131-18-2.

After college, Heffernan began his coaching career as a graduate assistant with Iowa in 1988, before moving to different jobs at Lehigh University and Oregon State. Heffernan eventually followed former Illini head coach Mark Johnson to Champaign and never looked back.

“I am grateful to the University of Illinois, Josh Whitman and the entire Division of Intercollegiate Athletics for the opportunity to be a part of the Illini community for more than half my life,” Heffernan said. “For the past 29 years, Rebecca and I have lived, worked and raised our children here, and it has truly become home.”