Illini travel to Lincoln to ‘shuck the Huskers’ 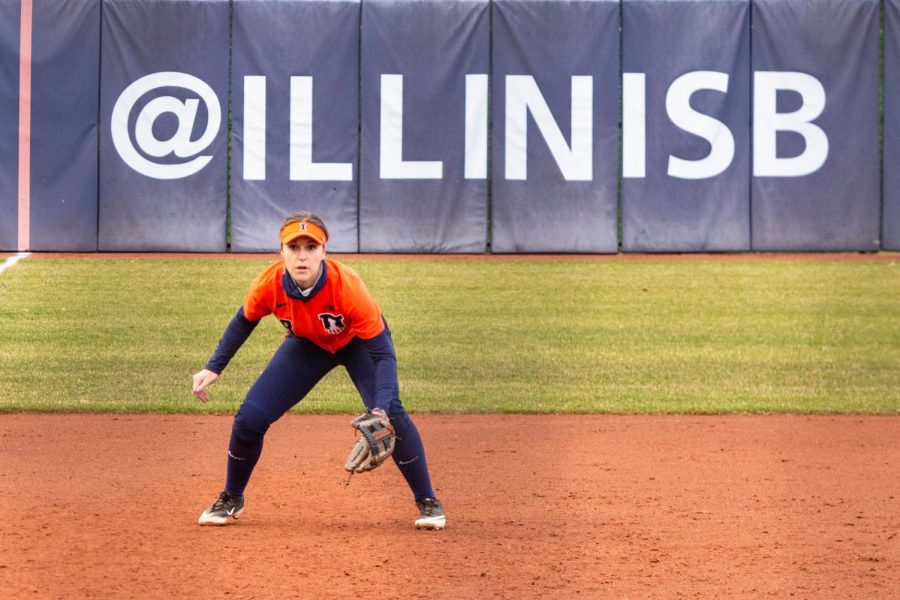 Sophomore Delaney Rummell is in position at third base during the game against Minnesota on March 26. The Illinois softball team will travel to Lincoln, Nebraska for a four-game series against the Cornhuskers on Thursday.

Illinois will head back out on the road Thursday to Lincoln, Nebraska for a four-game series against the Cornhuskers. Their opponent currently sits at a 11-9 record, though they are on a two-game losing streak. The Illini are ready for the challenge; with a 14-6 record, they’re expecting to extend their one-game winning streak.

“I feel really good and confident in everything that we’ve been putting together at practices and everything we’ve done so far at games,” said sophomore Delaney Rummell. “Our pitchers have been lights out recently, and we’ve been able to string some hits together, so I’m excited to see this all come together this weekend.”

Rummell, along with the Illini, are excited to not only crush the Cornhuskers with their offense but to also dominate playing defense behind junior pitcher Sydney Sickels. Sickels has earned her second Big Ten Pitcher of the Week honors after another outstanding performance at Wisconsin. She led the Illini to two complete-game shutouts over the Badgers with a 0.00 ERA while throwing 14 innings. She added 24 strikeouts (12 in each game) and walked only three while allowing just six hits.

With effective players at each position, Illinois has created a mentally and physically tough team. With this unified toughness, the Illini continuously have each other’s backs, as they’re able to stay loose and work as a unit.

After the 2020 season was cut short by COVID-19, many players — especially incoming freshmen — missed out on key experiences. Yet, by using the first six weeks of the season and working alongside an experienced infield and outfield, players have been able to look to their teammates during moments of struggle to be able to find that motivation.

“We fight for the people that wish were in our shoes but also for ourselves and those times when we used to wish we were in the position we’re in right now,” Rummell said. “That is how we push ourselves through those tough games and tough times. All the sacrifices we’ve made to come this far, all the work that the coaches have put into us and the time that we’ve spent has shaped us into the women and team that we are.”

Illinois defines and emphasizes what it means to work as a cohesive unit on and off the field. As they continue to work toward the playoffs, the team’s collaboration and reliance on each other has helped them advance through the season. The 24 players take advantage of every moment they have to grow mentally and physically as a team, driving them to win it all.

With every passing week, the Illini’s bond strengthens, contributing to their plays on the field. They not only focus on the craft of softball but also on being detail-oriented and paying attention to the little things to find that extra boost of motivation. Illinois stresses finding that internal grit and toughness throughout every game.

With every new opponent, Illinois makes sure to keep the competitive environment light but serious. In doing so, they create gratifying ways to find that chip on their shoulder, get ready to compete and impel themselves toward a win. Each new week comes with a new saying based on the opposing teams’ names.

“Our motto right now is shuck the ‘Huskers,” Rummell said.

In creating this environment, the Illini come together to find ways to remind themselves what they’re working toward. This is one of the little things that make up the bigger picture in helping the team come together and fight for one another on the field.

“We are very competitive, and it’s going to take a lot to bring us down because we’re going to do everything we can to fight,” Rummell said. “At the end of the day, the other team is going to know that they played Illinois. We really stress that as a team. When we talk together after games, we really just want to leave our mark every time we go out there.”

The Illini will face the Cornhuskers starting Friday at 5:30 p.m. central time. The series will continue into a doubleheader on Saturday at noon and 2:30 p.m., with the series finale Sunday at 11 a.m. All games will be available to watch on either the Big Ten Network or Big Ten Network+.