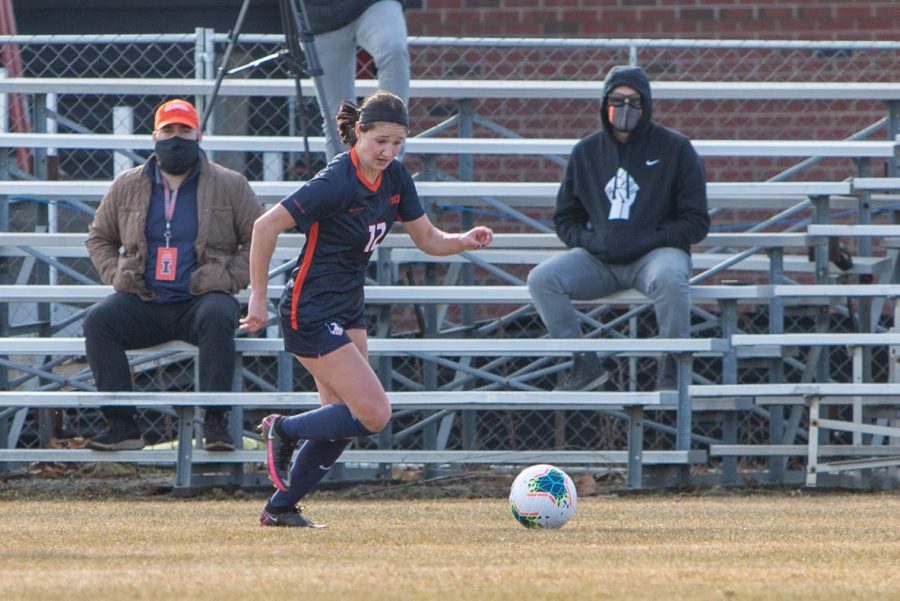 Sophomore Kendra Pasquele runs to the soccer ball during their game on Feb. 26 against Iowa. Kendra Pasquale is only one of four who earned honors for the program.

With the Big Ten Tournament semi-final and championship game this weekend, there has yet to be a crowned winner. However, the regular season wrapped up a couple weeks ago and Penn State clinched the Big Ten Title.

For the Illini, four players earned honors for the program. On the Third Team All-Big Ten, forward Makena Silber and midfielder Kendra Pasquale got the nod.

Silber, in her third year as a starter, finished second on the board with most goals scored (3). All goals came from gamewinners against Purdue, Nebraska and Michigan State that broke the deadlock and got Illinois the win. The Crystal Lake, Illinois native came in clutch for the Illini every time she had a chance on goal. Silber’s presence and speed on the field is what helped Illinois in intense moments during games.

Pasquale emerged as one of the best for Illinois this season. Her speed and skills on the ball got the Illini out of some sticky situations. She finished the season as the leading goal scorer this season (5) and second best in assists (2), Whether it be scoring the game winning goal in less than two minutes against Northwestern or sending a through pass to put Silber onto goal against Nebraska, Pasquale has been a part of the team’s success.

Defender Joanna Verzosa-Dolezal earned a spot on the All-Freshman Team. Verzosa-Dolezal was an integral part of the backline for the Illini. While only a freshman, she played every single minute in every game in an Illinois uniform. She isn’t scoring or assisting goals, but she has proved to be a leader at the back and has been able to block some shots and attacks from getting through onto goal. As only a freshman earning an honor like this, Verzosa-Dolezal is one for the future as an Illini.

Midfielder Jayna Fittipaldo was one of the 14 players to be honored with the Big Ten Sportsmanship award. Per The Big Ten, they give this award to students who have distinguished themselves through sportsmanship and ethical behavior. These students must also be in good academic standing and have demonstrated good citizenship outside of the sports-competition setting. A two time Academic All-Big Ten, Fittipaldo has distinguished herself as a disciplined student. As a player, Fittipaldo was part of the electric and high energy bench cheering and motivating the Illini who were on the field during games.