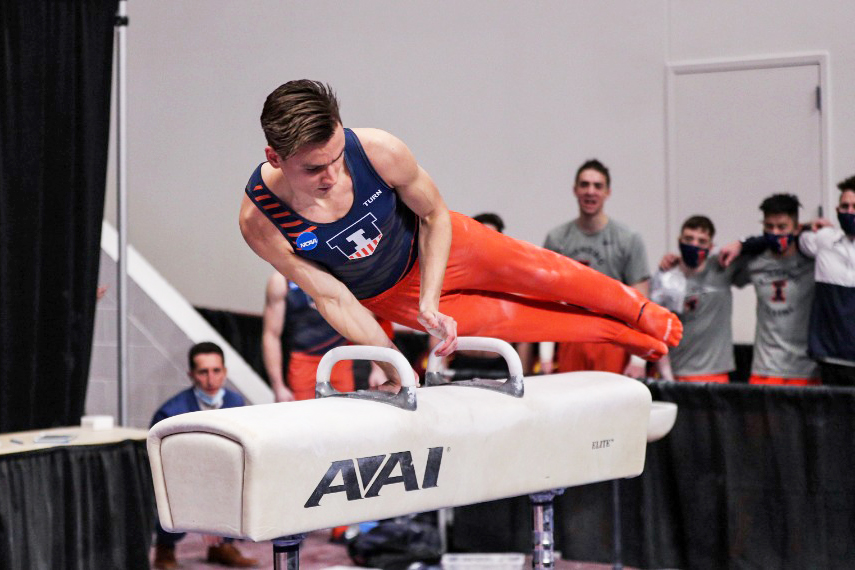 On the north wall of Huff Hall’s arena sits a list of 34 Illinois gymnasts who have won at least one individual NCAA men’s gymnastics championship. Among the names on that list are USA Gymnastics and/or Illinois Athletics Hall of Fame inductees Joseph Giallombardo, Abie Grossfeld, Justin Spring and Don Tondry, with the latter three also competing in the Olympics.
The name Ian Skirkey will be added to that list in the very near future.
Saturday in Minneapolis, Skirkey won the NCAA pommel horse championship, the first NCAA championship title of his career. Skirkey is also the first Illini since Brandon Ngai in 2016 to win a pommel horse championship.
“From the start, I never really had any strict expectations for my performance,” Skirkey said. “I just wanted to go out there, do the best that I could and keep myself calm leading up to the routine.”
Skirkey won two pommel horse titles during the regular season and finished second on pommel horse in the Big Ten Championships, just five-hundredths of a point out of first place. He earned Second Team All-Big Ten honors as a result of his runner-up finish.
Though he entered the national championships ranked No. 22 in the nation on pommel horse based on national qualifying average, he proved that rankings don’t matter. He had the highest pommel horse score of Friday’s qualifying session I with a score of 14.066.
According to Spring, Illinois’ head coach, Skirkey was among five or six gymnasts who had the best shot at winning the pommel horse national championship. With Illinois performing on pommel horse last on Saturday and Skirkey anchoring the lineup, he was going to perform knowing the score that would win him a national championship.
Skirkey called this a blessing and a curse.
“That information can sometimes put extra pressure on you,” Skirkey said. “It’s not what you want going into your routine, especially on pommel horse. You want to be very calm, and the more that you think about the score that you need to get, the worse your performance is going to be. Any time I began to think about that, I told myself to let go.”
Skirkey’s strongest competition for the title didn’t have stellar performances Saturday. Michigan’s Cameron Bock and Markus Shears outscored Skirkey on pommel horse in qualifying session II the night before, but they had uncharacteristic errors in their routines Saturday, lowering their scores from lower 14s to 12s. Bock and Shears’ teammate, Paul Juda, led the field with a score of 13.800 going into the final rotation, a relatively low score for Skirkey to beat.
“The door was wide open on pommel horse,” Spring said. “Ian was basically the last horse guy who had a chance.”
Skirkey stepped up and delivered the only pommel horse routine to break 14.000. He easily outscored Juda with a score of 14.166, one-tenth of a point higher than his score the previous day.
Skirkey’s championship ended a long and difficult season for him and his teammates. They spent the last eight months adhering to team COVID-19 protocols, which included staying on campus during winter break.
“To come out of a year like that with a national title, it gives veracity to all the work that we did and all the time that we spent in the gym and away from our families,” Skirkey said.
Skirkey has two more years of eligibility remaining in his collegiate career: his senior year and an extra year being afforded to NCAA athletes in response to the pandemic. Spring has already extended an offer to Skirkey to have him stick around for a fifth year.
Skirkey’s championship also qualifies him for the USA Gymnastics National Championships in June, joining fellow Illini junior Michael Fletcher.