Illini of the week: Small continues to build his legacy after sixth straight Big Ten title 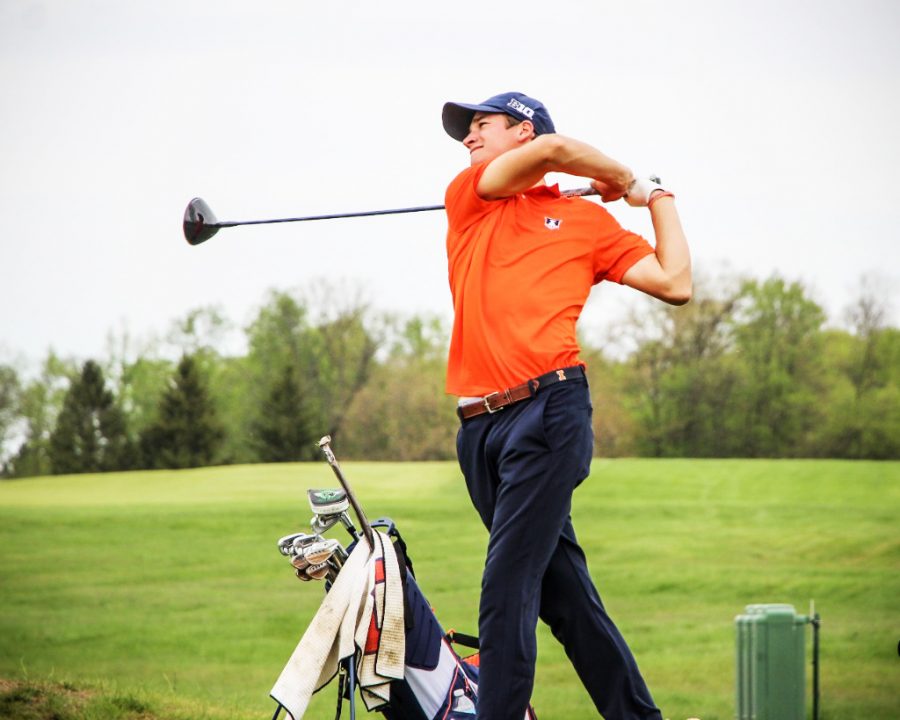 Illinois men’s head golf coach Mike Small’s list of achievements is long: He is a 2013 Illinois golf Hall of Fame inductee, five-time NCAA Regional Champion and 11-time Big Ten Coach of the Year. He’s had success as a player, and even moreso as a coach. But he’d never won six straight conference championships until now.
“This is what you play for: legacy, and for records and for rings and things like that,” Small said.
Over the weekend, Small and the Illinois men’s golf team captured the Big Ten title once again, a surprise to no one, but a record nonetheless.
The Illini won five straight Big Ten Championships from 2009-2013, but they lost in 2014 in an upset to Minnesota, which was ranked 57 spots below them.
That year, the Illini went on to win the NCAA Regional Championship and reach the quarterfinals in the National Championships, proving just how hard it is to win six straight conference championships even when you are the best team.
“The bigger you make something, sometimes the harder it is to get,” Small said. “We found that out when you win all these Big Ten championships in a row.”

The No. 11 Illini were almost stopped at five again this year. Their win at Crooked Stick on Sunday came by just one stroke over No. 38 Iowa. They struggled early and exited round one tied with Iowa.
Fifth-year senior Giovanni Tadiotto struggled the most. He shot a team-high first-round score of 83 (+11), which included multiple double-bogeys. But when it mattered most, Tadiotto stepped up. In the back nine of round three, Tadiotto recorded three birdies and the team’s lone eagle. His final-round play was crucial to the Illini taking a late lead.
“Everyone in the conference remembers who’s the winner; everyone in the nation remembers who’s the national winner,” Tadiotto said. “They won’t remember who was the winner of the third tournament of the 2021 season.”
This win meant a lot to Tadiotto and fellow fifth-year senior Michael Feagles, who finished fifth at Crooked Stick. They arrived at Illinois when notable alumni Dylan Meyer and Nick Hardy were juniors.
“When I got here as a freshman, Nick and Dylan had won two Big Ten championships, and then I helped them win two more,” Feagles said. “(Tadiotto)’s my best friend. He’s my roommate. We’ve lived together for five years. So much of our decisions to come back were based on each other, and we wanted to do this together and lead this team.”
The two seniors will leave Illinois knowing only success in the Big Ten, thanks in large part to juniors Adrien Dumont de Chassart and Tommy Kuhl, who finished second and tied for tenth, respectively, at the Big Ten Championships.
Dumont de Chassart likely will be the team’s top golfer next year, and it’ll be up to him, Kuhl and sophomore Jerry Ji to build upon the team’s current streak of Big Ten greatness.
The Illini still have a chance to build on this team’s legacy. Two weeks from now, they will compete for the NCAA Regional title, which the Illini last won in 2019. After that, Illinois will attempt to do what no team in program history has done: Win the national championship.
“I think it’s important to (the team),” Small said. “It means a lot. Playing for the University of Illinois is a big deal to these kids, and that’s what we want. That’s why we do this stuff.”