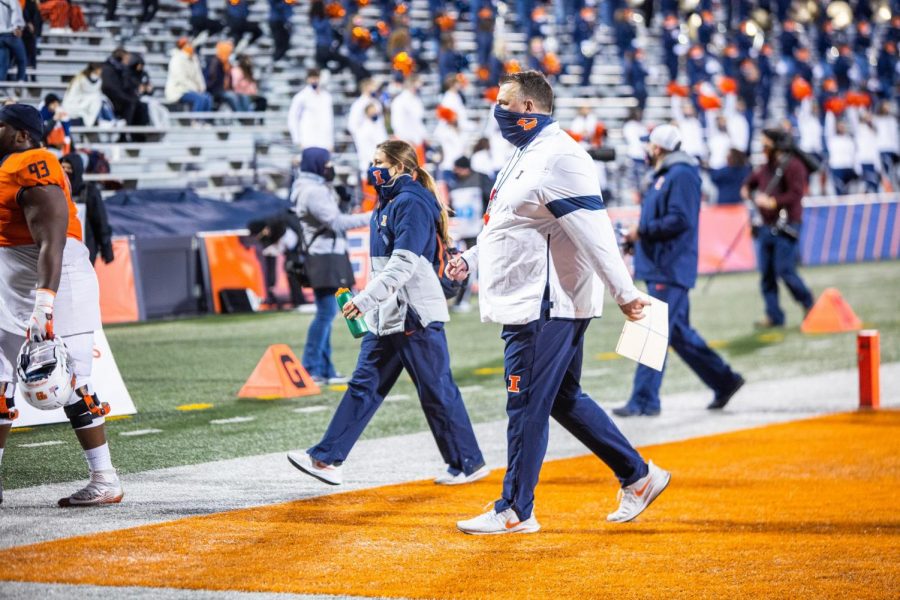 Bret Bielema walks off the field after the spring game April 19. As spring football ends, fans got a taste into what fall may look like.

Bret Bielema came to Illinois this winter after being hired as the new head coach, hired a new staff and was able to retain the majority of players for an extra year of eligibility. Despite a fast start, there were a lot of unknowns heading into spring ball, either it be a quarterback battle, recruiting changes or position depth. However, a lot of questions have been answered as spring ball comes to a close.

The quarterback battle between Brandon Peters and Isaiah Williams was one of the most anticipated position battles heading into the offseason, with both players starting games during the 2020 season.

Though both played quarterback in the annual spring game and had good moments, the answer is now clear. Isaiah Williams is switching positions to wide receiver, making Peters the sure-fire starter for 2021.

Peters becoming the official starter isn’t much of a surprise considering how spring ball went and his performance with the team in the past. The bigger news is that Williams, being the athlete that he is, is changing positions.

Williams was recruited out of high school by plenty of the best teams in the nation, but many schools preferred him at a position other than quarterback, which is part of the reason he chose Illinois. Now, the Illini will get to use his speed and athleticism to their advantage at another position, catching passes from Peters.

“Isaiah will be at wide receiver for us moving forward,” Bielema said. “It was just something that he and I discussed and eventually evolved to, and when we got done with the (spring) game, he wanted to take a couple days to look at it and was very impressive in those three practices after the spring game.”

Bielema and the staff also brought in transfer quarterback Artur Sitkowski, who has starting experience at Rutgers, as a backup for this year.

Coming into the spring, there were also questions about who would be starters at certain positions, as well as who would be playing at all, and the spring game hinted at a lot of those answers.

At receiver, especially before Williams changed positions, the group was thin. Brian Hightower and tight end Daniel Barker had the most experience in the group, and that was pretty much it. But after being put on the “first team” during the spring game and their performances in the game, it’s clear that Khmari Thompson, Carlos Sandy, Donny Navarro and Luke Ford all should be expected to consistently catch passes from Peters come the fall.

The offensive line group is similar. Doug Kramer, Alex Palczewski and Vederian Lowe are all sure-fire starters after being in the mix for the past four years, but the other two spots are up for grabs. Blake Jeresaty, Verdis Brown, Julian Pearl and Alex Pihlstrom are all among the players competing for the spot, and as of right now, the starters are unknown. Jeresaty was impressive during the spring game and was an FCS All-American, which may give him the advantage heading into the offseason, but the position group has a lot of depth and will be competitive for a starting spot up until August.

An advantage that Bielema’s staff will have for determining playing time this fall is that everyone will be healthy. Players such as Marquez Beason, who just changed positions to receiver, and Palczewski weren’t healthy for spring ball, but it is anticipated that they, along with everyone else who was injured, should be good to go come the summer.

“(We) cleaned up with injuries,” Bielema said. “Couple guys had procedures. But for the most part, we’re gonna have a pretty healthy football team coming back when we start June. Majority of our guys that missed the spring will be working back into, if not full-go, workouts … for that first week in August.”

Recruiting wise, a big reason athletic director Josh Whitman brought in Bielema as head coach was because of the emphasis he wanted to put on recruiting. Lovie Smith, the head coach before Bielama, did what most believed was a terrible job recruiting in-state talent, which was the exact opposite of what Bielema said he planned to do.

So far, he has stuck to his word. He and his staff have a plan to communicate directly to every high school team in the state to create a connection there and want to recruit all the top players in the state, year in, year out.

So far for the 2022 class, the Illini have received eight commitments and are ranked sixth in the Big Ten. Half the recruits also are from Illinois. And, based on Bielema’s final spring press conference, it sounds like they have big plans to build on that this summer.

One of the most difficult parts of becoming a head coach for a team is developing relationships with the players. For Bielema, he recruited none of the players that are on his team in 2021 — other than a few transfers — and even has older guys that played under Lovie Smith for four or five years.

Having taken new jobs before, Bielema understands the challenges of taking on a new coaching role and knowing how important it is to develop relationships with his new players. This spring, he made a big effort to get close with his players, talking to each one individually and making sure his assistants did the same.

“Last week, and probably one of my more enjoyable times of the year, I’ll sit down and interview everybody on our roster,” Bielema said. “It’s really been beneficial for me this time, even being around these kids since the start of the semester. A lot of times this was my first true one-on-one with them in my office. I get a chance to ask them their history, their background, how they got here, but also going way back to when they started playing football. … They also sat down and talked with their position coach. … Really an all-encompassing week for our guys.”

Bielema has only been an Illini for five months, but he has already made a lot of progress with players, coaches and recruiting. He’ll get more chances to work with his team through the summer and fall, all leading up to the season opener in week zero against Nebraska at home in front of the fans at Memorial Stadium.