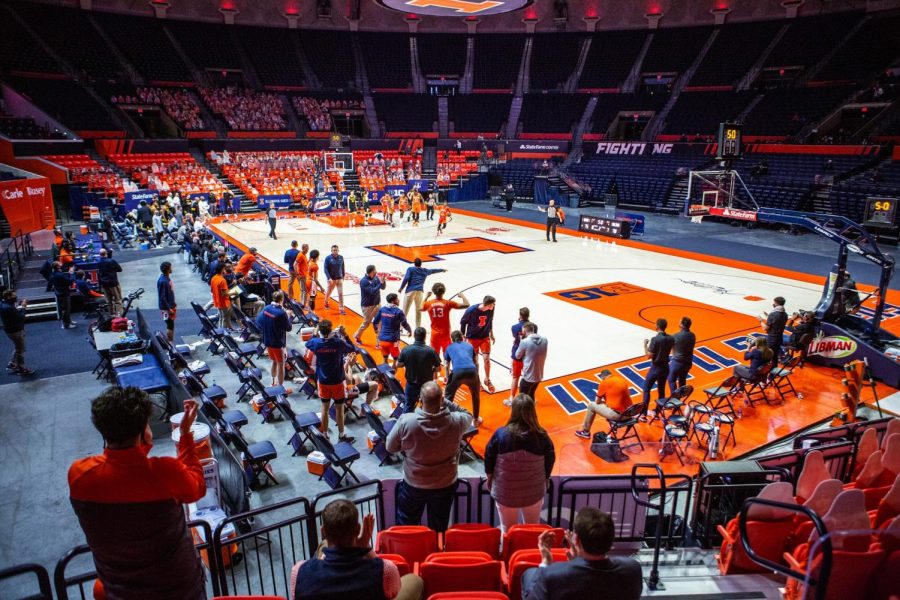 The Illinois basketball team celebrates a win against Iowa Jan. 29. Brad Underwood will still have some key players for the fall.

When the basketball world shut down in March of 2020, Brad Underwood had to have figured that would be one of his most bizarre offseasons as a head coach.

The one-time transfer rule then passed the next season, meaning players didn’t lose a year of eligibility from the COVID-19 season, and Illinois’ top two assistants departed, making the 2021 offseason just as wild.

Gone are All-American guard Ayo Dosunmu (as expected), while junior Giorgi Bezhanishvili also decided to forego his final year of eligibility and turn pro. The most surprising move, though, was freshman guard Adam Miller’s decision to enter the portal and transfer to Louisiana State.

The good thing for Underwood is that both Trent Frazier and Da’Monte Williams have elected to return for their free year of eligibility. While they are on scholarship, they won’t count against the scholarship limit.

As it stands today, Illinois currently has 14 scholarship players for next season, with 12 counting against the limit. Kofi Cockburn still is technically on scholarship, but he may eventually turn pro. Here’s a thought on each scholarship player.

Cockburn has entered his name in the NBA Draft while maintaining his eligibility. However, all signs point to the Kingston, Jamaica native staying in the draft. For the purpose of this exercise, though, let’s assume he’s staying.

Cockburn is the guy who could take Illinois from a solid team to a really good one. After being named First-Team All-Big Ten as a sophomore, he would be the potential Big Ten Preseason Player of the Year if he did return.

Cockburn was uber-efficient last season playing off Dosunmu, but with Dosunmu gone, Cockburn will need to become more of an offensive hub for the Illini. More than 65% of his field goals last season were assisted, and he only tallied five assists on the season. Illinois will ask Cockburn to do more offensively, so improving in those two areas is key.

Frazier, a four-year staple in the starting lineup for Underwood, elected to return for his extra year of eligibility. He’s consistently improved on defense the past two seasons, earning Big Ten All-Defensive Team honors last season.

Offense is where Frazier will need to take the leap next season. Frazier was the lead scoring guard his freshman year, but he took a secondary role when Dosunmu entered the program. In the three games Dosunmu missed last season, Frazier was a mixed bag. He struggled against Nebraska, going 1-9, but he showed flashes of a prominent lead scorer against Michigan, scoring 22 points on 7-18 shooting.

Andre Curbelo will be the lead handler next season, but expect Frazier to see an increased usage rate and produce more offensively.

Like most freshmen, Curbelo had his ups and downs, but the flashes of brilliance were there. He was a genius passer, posting the highest assist percentage in the Big Ten. His struggles stemmed from his shooting, especially from beyond the arc, where he was a poor 5-31.

The shooting is the deciding factor when determining Curbelo’s ceiling next season. Teams played to his weakness and consistently went under ball screens and stayed attached to role players. And even without a reliable jumper, Curbelo put up terrific numbers in just 21 minutes per game, in large part due to his ability to manipulate defenders.

He’ll be the primary creator for the Illini next season, and if he improves the jumper, it’s easy to see him being one of the best guards in the Big Ten. Even if the jumper isn’t at a respectable level, he will still be a constant triple-double threat.

Williams joined Frazier in electing to use his extra year of eligibility, giving Underwood even more experience and depth. Often described as a glue guy, Williams took a large leap as a jump-shooter. After making just 35 threes his first three seasons, he hit 35 in just 31 games last year on a ridiculous 54% clip. Teams know Williams can shoot now, so I’m curious to see how his game expands when teams close out on him.

His role also is a bit of a question mark. After playing small-ball four for the past two seasons, the Illini have been actively searching for a more traditional four this offseason. What position Williams plays and what his minutes look like compared to Jacob Grandison’s are things to monitor.

After sitting out last season after transferring in from Holy Cross, it took Grandison a few weeks to find his footing for Illinois. But a mid-season shift to the starting lineup sparked a seven-game winning streak for the Illini, thanks to his size and shooting ability at the four.

Like Williams, Grandison’s minutes will be impacted by whether Illinois lands a transfer forward. If they don’t, expect Grandison to start at the four. He’ll need to continue to provide the hustle plays that earned him that starter role.

Plummer, a 6-foot-1 lefty guard, excelled at scoring the basketball for Utah last season. He’s a dynamic shooter with serious versatility in that regard. Replacing Dosunmu and Miller’s combined 27 points per game will be a challenge, but Plummer should help fill that void.

The biggest question surrounding Plummer is how he will mesh with the returning guards — Curbelo and Frazier. Offensively, that’s a dynamic trio. But defensively, playing three sub-six-foot-two guards will make it hard to survive. Plummer will have to show he can provide more on that end than he did at Utah.

A former top-50 recruit, Payne struggled to find his role at Florida, as the Gators recruited transfer bigs over him in his first two seasons. If Cockburn leaves, it’s very likely that Payne is the starting center on day one.

Illinois will need the Kissimmee, Florida native to channel the best version of himself. He had spurts of looking like an elite big man with his size and leaping ability, but he also coasted for large chunks of games as well. Fine-tune his motor, and Illinois can have a feasible replacement for Cockburn.

Hawkins’ freshman season was mostly a learning year, as he added some weight to his lanky frame and made appearances in just 25 games. Still, getting that in-game experience will be key for him. When he played, he showed flashes of a stretch big who can also offer some rim protection.

Hawkins played solely at the four last season, but at 6-foot-10 and with presumed added weight, it’s plausible to think he could provide some minutes at the five next season. Hawkins at the five would unlock more spacing and shooting for Illinois, which could make them dominant offensively.

Expectations were high for the Division III transfer entering his first season at Illinois. But he re-injured his back and missed the entire season, leaving Illinois with a loss on the wing.

The question is now what level of health and production level will Hutcherson provide. He hasn’t played a Division I basketball game yet and hasn’t played in a college game in two years. If healthy, he can provide shooting and size on the wing, which Illinois could sorely use. But if not, there are enough rotational players to bring him along slowly.

The last commit in the 2021 class, Podziemski exploded in his senior season. He won Mr. Basketball in Wisconsin and boosted up the RSCI rankings.

Podziemski’s shooting could help him find a role in the lineup early. He showed both catch-and-shoot and off-movement skills last season. But he’ll be transitioning from a low level of competition to the Big Ten, so it remains to be seen how college ready he is. Illinois has depth at the one and the two guard spots, but it could use some minutes at the three.

Goode seems like the freshman most likely to contribute, especially with a void at the three. His size at 6-foot-7 will help Illinois match up on the wings, and he projects as a plus shooter. Goode will need to improve as an athlete and add strength, but if Hutcherson isn’t ready to go, he could carve a role off the bench.

Melendez is the most raw of the three freshmen wings, but he might have the most upside. He’s a plus athlete, finishing some highlight reel dunks last season. With plenty of wings ahead of him, it’s unlikely he contributes much this season, but it should be exciting to watch his progress.

Bosmans-Verdonk was solely used as an emergency big last season if Cockburn or Bezhanisvhili got in foul trouble. If Cockburn returns, his role will be the exact same. If Cockburn leaves, I still believe Illinois will use Hawkins as the backup center, but Bosmans-Verdonk’s strength could allow him to eat up some more minutes. He’ll have to improve as a finisher so teams take him more seriously on offense.

Last season was essentially a redshirt season for Lieb, but he didn’t have to technically redshirt given the free year of eligibility. He’s the tallest player on the Illinois roster, but he needs to add serious weight before he gets looked at in the rotation. Expect this year to be another freshman type of season, with emphasis on strength and behind-the-scenes development.