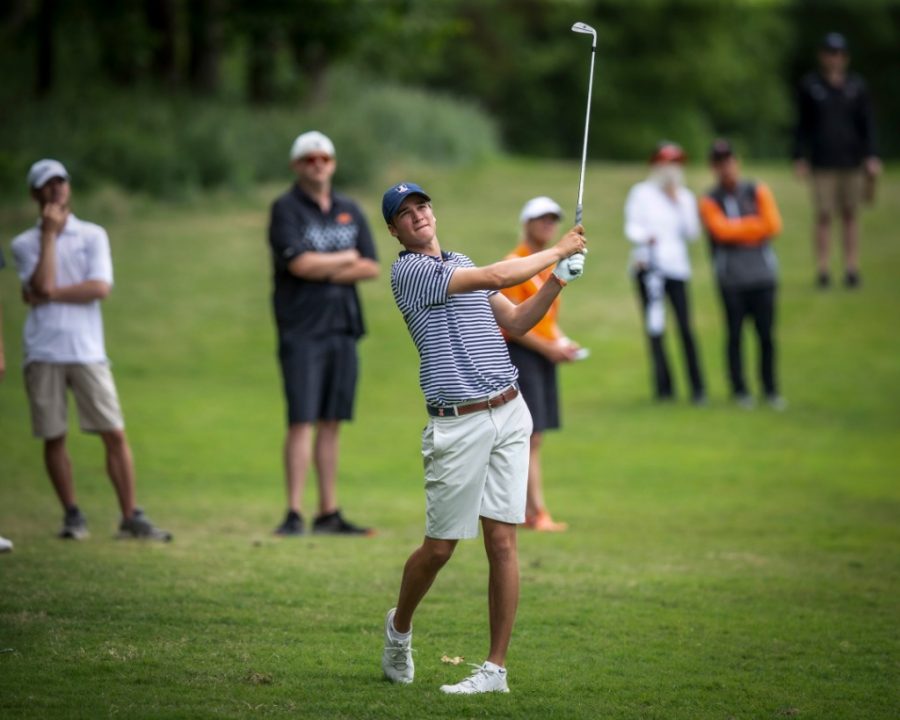 Junior Adrien Dumont de Chassart watches the ball after taking a shot at the NCAA Stillwater Regional. The Illini hope to have a strong performance at their 13th straight Championship appearance after finishing 27th in 2019.

The Illinois men’s golf team has been a constant in the NCAA Championship since 2009. With their second-place finish at the Stillwater Regional, they booked their ticket once again. This year the Championship will be played in Scottsdale, Arizona at Grayhawk Golf Club.

“It’s something we’re very proud of because this program is about consistency and stability,” said head coach Mike Small. “To do that, that many years, that’s what we project, that’s what we want to happen. … Now we have something to prove to ourselves because the last NCAA finals we played in two years ago. Because last year there wasn’t one, the blessings was our worst finish since I’ve been here.”

That was the 2019 NCAA Championship in Fayetteville, Arkansas, where the Illini finished 27th out 30 teams. Four of the five Illini golfers who competed that weekend will compete again this weekend.

Fifth-year seniors Michael Feagles and Giovanni Tadiotto were juniors, and Adrien Dumont de Chassart and Tommy Kuhl were freshmen. The only new faces on the team are sophomore Jerry Ji and freshman Piercen Hunt, who is listed as an alternate.

“Obviously, that NCAA championship two years ago wasn’t what we wanted at all.” Kuhl said. “ I think we came out a little flat. And I think we just need to get off to a better start. We all know that we’re playing good, and the only thing we can do is take it one shot at a time. We can have that end goal in mind of winning a national championship, but we can’t be thinking about that on the course. We just got to take it one step at a time.”

Small is aware that with the continuity of the team comes doubts that may creep in due to past failures. He has made it a point of emphasis to learn from the mistakes and not “fall into the same trap we did two years ago.”

“We need to really, really act like it’s our first,” Small said. “But be comfortable enough to know that you have to get off to a good start.”

As the only Big Ten team competing in the Championship, the Illini have some weight on their shoulders, but it’s not completely new to them. Usually only two or three Big Ten schools make it; this year it’s just Illinois.

Small believes this is likely due to Big Ten schools not having a fall golf season, while some other conferences did.

“I think it hurt some of the teams, maybe in their seeding or development,” Small said. “But we’ve been carrying that banner for a while. And that’s something we’re used to that we take pride in. But again, we take care of our business, and we want to represent the Big Ten well, but we do that just through consistency.”

It’s an especially special tournament for Fealges, as he was born and raised in Scottsdale not too far from Grayhawk Golf Club.

“It’s been full circle for me to come all the way from Scottsdale to here, and (I) love every minute of my time in Champaign,” Feagles said. “Tthis program and our fan base and just the people all over this city are amazing. So to kind of have it, the back end of it, in Scottsdale would make it just the best end of the story possible. I couldn’t think of a better way.”

It’ll be a hot weekend in Scottsdale, with the temperatures peaking at 100 degrees throughout the scheduled tournament. The Illini will compete against the other 29 teams in stroke play after which the top eight teams will move on to the match play round, where a champion will be crowned.