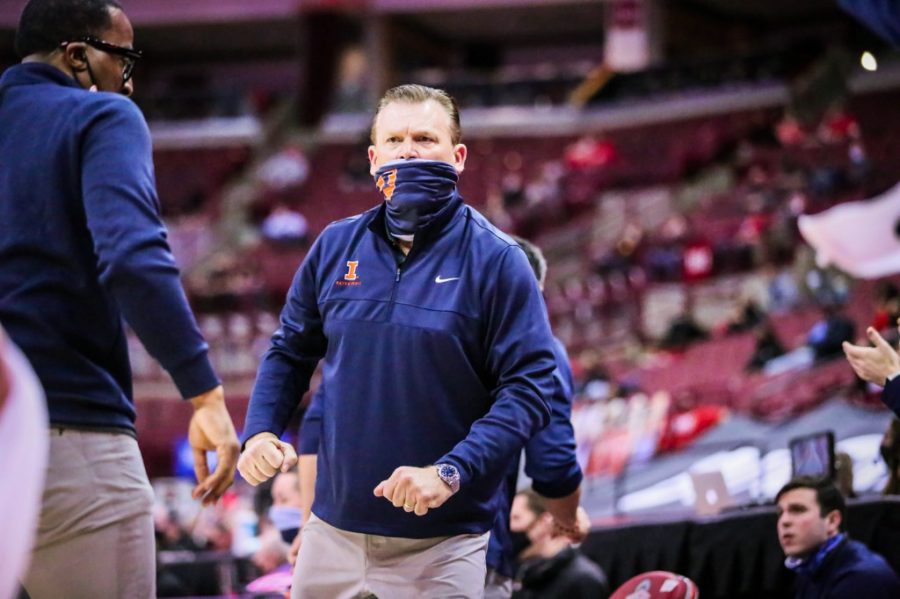 Head Illinois basketball coach Brad Underwood looks intently at his players during the game at Ohio State March 6. Underwood has filled all three assistant coaching spots after Tim Anderson was named an assistant on Friday.

“It’s exciting to become part of Illinois Basketball, to join a program that is truly special with its history and its fan base, and to join Coach Underwood’s winning culture, a coach who has won everywhere he’s been throughout his career,” Anderson said in a statement. “I grew up watching the Fighting Illini on channel 26 and understand the tradition that started with Coach Henson and has carried through to this day. For the all-time great players that wore the jersey and left a legacy with the success built here over the years, that’s what we’re charged with continuing. It’s a special opportunity and we’re ready to get to work to make it happen.”

Anderson spent four years as an assistant coach with the Blue Demons, helping the team secure Big East tournament wins in consecutive seasons for the first time in program history in 2020 and 2021.

Prior to joining DePaul, Anderson led Ground Zero Training, a program based in Chicago that helped to prepare college players for the NBA Draft and professional players competing in leagues across the globe. He also served as program director for MeanStreets, one of the most successful AAU programs in the nation.

“Tim is the complete package. He has expertise in every area to benefit our players and our program,” head coach Brad Underwood said in a statement. “You’re talking about someone who is an industry leader in player development, as evidenced by many of the world’s top players selecting Ground Zero Training as the place to perfect their game. He is an excellent teacher, and he brings great recruiting ties not just in Chicago, but throughout the state of Illinois and nationally. Tim has done it at literally every level, from high school and AAU, to junior college and division II, and low major to high major in division I. He is a grinder who has paid his dues because he loves the game of basketball and helping people achieve their dreams. He is without question an ‘Every Day Guy’ who is the perfect addition to our staff.”

Anderson rounds out the assistant coaching staff after Orlando Antigua and Chin Coleman left for Kentucky and Stephen Gentry departed for Gonzaga.

Anderson will begin his new role on July 26.