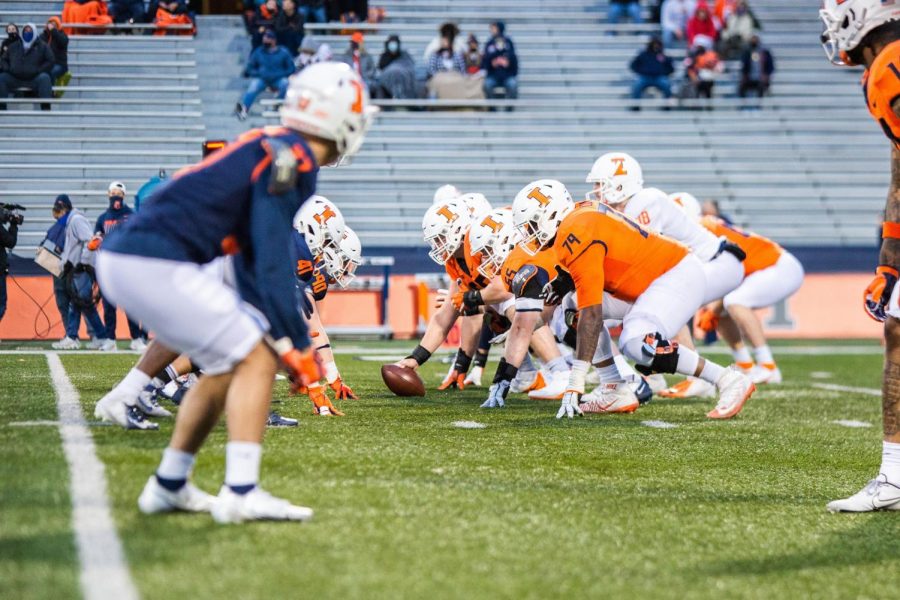 The offensive line waits to snap the ball during the Orange and Blue game on April 19. Head coach Bret Bielema and offensive linemen Vederian Lowe and Doug Kramer talked about their hopes for the offense during Big Ten Media Days.

Entering a season in which lots of things have changed for the Illini, from a new head coach and coaching staff to playing post-pandemic, there will have to be lots of getting used to.

But the roster is the one part of the team that hasn’t changed much. With an offense that showed promise in 2020 and many familiar faces returning, the Illini are expecting to achieve more success and scoring in 2021.

The strongest position on the roster entering the season is the offensive line, mainly due to the returns of Alex Palczewski, Doug Kramer and Vederian Lowe. All three players have earned All-Big Ten honors in their careers, and along with a deep room that has a lot of in-game experience, the offensive line is expected to compete with the best in the conference.

Left tackle Vederian Lowe, who’s been in the playing mix for the past four years, believes the offensive line is where the success starts for the offense.

“With the amount of experience we have on the offensive line, I think that (our play) is contagious,” Lowe said. “Us just being prepared, us just being confident, the confidence is just contagious.”

The line will be blocking for quarterback Brandon Peters, who also made the decision to return to Illinois as a super senior. Peters has been the starting quarterback over the past two seasons when healthy and will be the starter again in his third year wearing orange and blue.

Peters has shown promise at times over two years, showing the ability to both throw and pass the ball effectively, but inconsistent play has been an issue. After sitting out three games in 2020 after testing positive for COVID-19, Peters returned to lead Illinois to a high-scoring victory at Nebraska and played well in his best game of the season, but he was benched in the second half of each of the next two games.

To work on his game, Peters recently attended the Manning Passing Academy, the first Illini to do so since 2007. Lowe is excited to be blocking for Peters this season and expects the quarterback to significantly improve.

“Brandon is a great quarterback,” Lowe said. “Great player, great quarterback. He comes into work every day, he’s ready to work, and he doesn’t mess around. Brandon doesn’t mess around. He’s all about football, and I think Brandon’s going to take a huge step this season in his play. I think that this season is going to be a huge year for him. I’m just excited to block for him and to call myself his left tackle.”

Another aspect of Peters’ game that he’s been working on improving, though, is his ability to be a leader off the field. Ever since meeting Peters, new offensive coordinator Tony Petersen has stressed that a huge part of Peters’ game that he needs to work on is being more vocal, and center Doug Kramer said his quarterback is doing just that.

“Absolutely (he has grown more as a leader,” Kramer said. “I live with him too, so I’ve seen that growth firsthand. Not only just Brandon, but I think all of us need to be more vocal.

“But Brandon, in particular, he’s embraced it. He hasn’t taken it as a shot at him as a person. He realized that he needed to communicate more and communicate better as a quarterback, and that’s something he’s been trying to work on, and I think he’s gotten a lot better at it. ”

Behind Peters is another deep position: the running backs, which include super senior Mike Epstein and junior Chase Brown. Epstein and Brown each had multiple 100-yard games last season and combined for over 200 yards in Illinois’ win over Nebraska.

A position on the offense that will look different, however, is the wide receivers. Illinois has tight ends Daniel Barker and Luke Ford expecting to be active in the receiving group this season, as Barker was last year, but the wide receivers themselves don’t have as much experience.

With the departure of Josh Imatorbhebhe to the NFL, the Illini return players such as Donny Navarro, Casey Washington, Brian Hightower and Khmari Thompson, very few of whom have seen big minutes yet as an Illini. However, former quarterback Isaiah Williams has switched positions to wide receiver, something his coaches are very pleased about.

Williams was recruited out of high school by college powerhouses, including Alabama, as a receiver, and now that Illinois will add him to the wide receiver room, head coach Bret Bielema is thrilled about Williams’ potential.

“He had multiple national offers as a wide receiver; he chose Illinois because they were gonna let him play quarterback,” Bielema said. “And now that he’s chose to (switch to wide receiver) while he’s here, I think we’re getting really a five-star type receiver that instantly brings great ball skills.”

Though the receiver room was considered one of the weaker points of the offense to start the offseason, the addition of Williams leaves Bielema happy with where the group is at. He also credits the improvements of the room to wide receivers coach George McDonald.

“Geo just relentlessly works on making this room better, and I think that’s what you see now,” Bielema said. “I don’t know how it’s gonna be in the fall, but I have a good indication. George McDonald is probably one of the best assistant coach hires I’ve ever made.”

An aspect of the game that will be different for Illinois this year will be the return of fans at Memorial Stadium. The entire Big Ten Conference went without fans in 2020, and the Illini are allowing full capacity in 2021.

Having fans in the stands is a game changer for home teams, especially on the offensive side of the ball. The excitement and energy a packed stadium brings to a team is a major advantage for home teams, and Kramer expects the offense to benefit as much as anyone.

“Fans are massive, and last season really showed us how important they are to the game,” Kramer said. “(The) sport’s just not the same without them. … I know Illinois fans are gonna come out in waves, and I’m just really looking forward to it.”

The Illini will kick off the college football season in week zero at home against Nebraska, meaning they’ll be the first team in 2021 to play in front of home fans. With multiple key players returning and experienced talent scattered across the offense, Lowe thinks the sky’s the limit this year for the Illini.

“I don’t (think we have a ceiling); I think we can go as far as we take ourselves,” Lowe said. “Everyone’s gonna feed off of one another, which will generate some touch. … As long as we do the things that we preach to ourselves, day in and day out, I think that the sky’s the limit.”