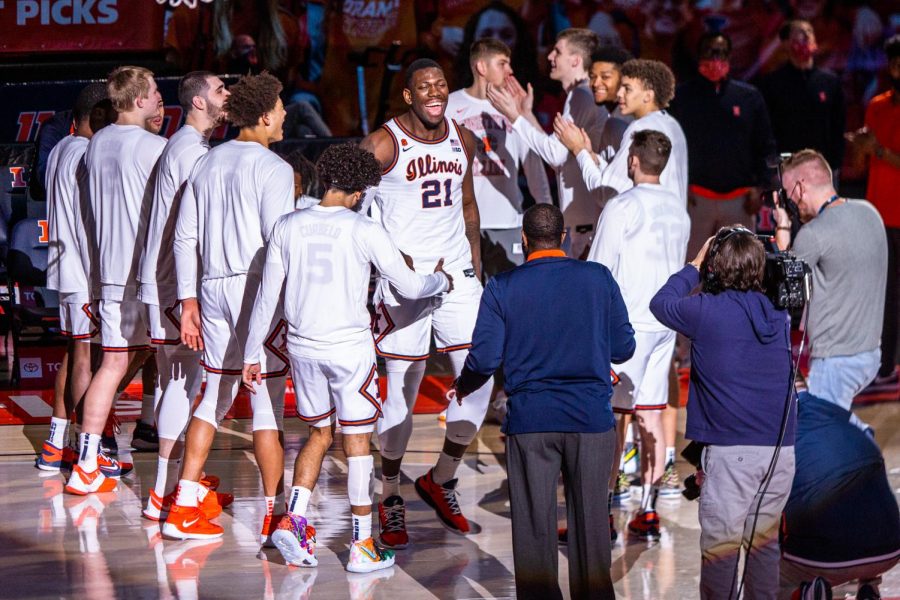 Center Kofi Cockburn walks through a tunnel of teammates preceding the game against Wisconsin Feb. 6. There are five top players that people should look out for as the season approaches.

With less than two months to go until basketball is back in Champaign, the Illinois men’s basketball team has released its full schedule. Despite the loss of Ayo Dosunmu to the NBA, Illini fans have a lot to be excited about this season.

This summer was one of ups and downs for the Illini. Following their first Big Ten tournament title since 2005,  the Illini were shocked by Loyola Chicago in the NCAA tournament round of 32, ending their magic season earlier than expected.

When sophomore Kofi Cockburn and freshman Adam Miller entered the transfer portal, things seemed to be going downhill. But the return of Cockburn, along with Trent Frazier and Da’Monte Williams exercising their additional year of eligibility, means the Illini will still have four of their top six scorers from last year.

The Illini should be very competitive this year, and with most of the team still intact, any unfinished business from last year may be on the front of their minds. Here’s what I think are the five games you won’t want to miss this season.

The Illini split two close games with the Buckeyes during the regular season, then met up with them again in the Big Ten tournament championship game, which the Illini won in overtime.

Each of their three meetings were decided by six points or less, and both teams picked up wins on their home courts. This matchup has a chance to be very exciting considering the team’s similarities.

Both teams lost third-year star guards to the NBA and had star big men return after considering departure.

Duane Washington Jr. may not have been as important to Ohio State as Dosunmu was to Illinois, but his presence and 16 points per game will be missed. The Buckeyes will play through junior E.J. Liddell this year after he broke out averaging 16 points and seven rebounds per game last year. Liddell versus Cockburn in the post should be fun to watch again.

Illinois and Jackson State have only faced off four times, each time here in Champaign, most recently in 2008.

This isn’t a rivalry game or necessarily a tough opponent. So why is this game on the list? Though it is nice to see a historically Black university on the schedule, that isn’t necessarily uncommon.

This one is about the fans. The students, faculty, alumni and Champaignites who had to watch from home as the team they love finally made its return to glory. I doubt anyone will argue it was bittersweet to witness the team’s success without a student section in attendance to cheer them on and mock the opponents.

This game will be the Illini’s first “official” game with fans at State Farm Center since the pandemic began. No offense to St. Francis or Indiana University Pennsylvania, but those are just exhibitions.

Jackson State had an impressive 2020-21 season. They were 12-6 overall and went 11-0 in SWAC conference games, though the Tigers would go on to lose in the second round of the SWAC tournament. The Tigers are led by senior forward Jayveous McKinnis, who was second on the team in scoring at 12.5 points per game.

The annual Braggin’ Rights game is always highly anticipated, and this year isn’t an exception. In fact, I expect the Illini to have an extra chip on their shoulder.

The Illini have lost three straight Braggin’ Rights games, including last season. Though Missouri finished in the bottom half of the less competitive SEC, the Tigers were able to scrape out a win in a close game on their home floor.

Last year’s Braggin’ Rights loss was quickly forgotten by Illinois fans, as the team went on to secure a #1 seed in the NCAA tournament. I’d expect the players to take this one personally, especially Cockburn, who, despite being the face of the program, has yet to secure a Braggin’ Rights win. Cockburn has averaged 16 points and four rebounds in two Braggin’ Rights games.

The Illini handled the Boilermakers pretty easily at home last year, but the losses of Dosunmu, Miller and Giorgi Bezhanishvili evens the playing field a bit. In addition, Purdue’s core four of Jaden Ivey, Trevion Williams, Eric Hunter Jr. and Sasha Stefanovic have had another year to grow.

The Boilermakers will likely surpass the weakened Iowa squad in the standings this season and contend for the one of the top three spots in the conference. This is the first of two meetings scheduled between the two teams, and it’s set for mid-January when both teams should be operating at a high level, with several months of basketball behind them.

By this time, the Illini should have all their new pieces implemented and up to speed. This matchup will be a good testing ground to see how the Illini fare against one of the expected conference frontrunners.

The Wolverines were the Big Ten regular season champions last year, and they are expected by many to reach that pinnacle again this year. Despite their upset loss to Ohio State in the Big Ten tournament semifinal, the future is bright for Michigan.

In addition, the Wolverines added a top transfer from Coastal Carolina, Davante’ Jones, who averaged 19.1 points per game in the Sun Belt Conference last season. And did I mention they have a potential Player of the Year candidate in Hunter Dickinson? This team is loaded with talent, but they also lost some important pieces.

It’ll be interesting to see how standings play out, but I expect the regular season title to be a close race between the Illini and Michigan. This being the Illini’s penultimate matchup means it could decide which team walks away with the regular season title. Regardless, it’ll be a premier matchup between two teams with high expectations, right before the tournament season starts.

And who can forget, the Illini whooped the Wolverines in their own building last year in a game that ended 76-53. Have the Wolverines forgotten about that? I’m sure they’ve tried, but I doubt they want to let it happen again. This one should be a battle.