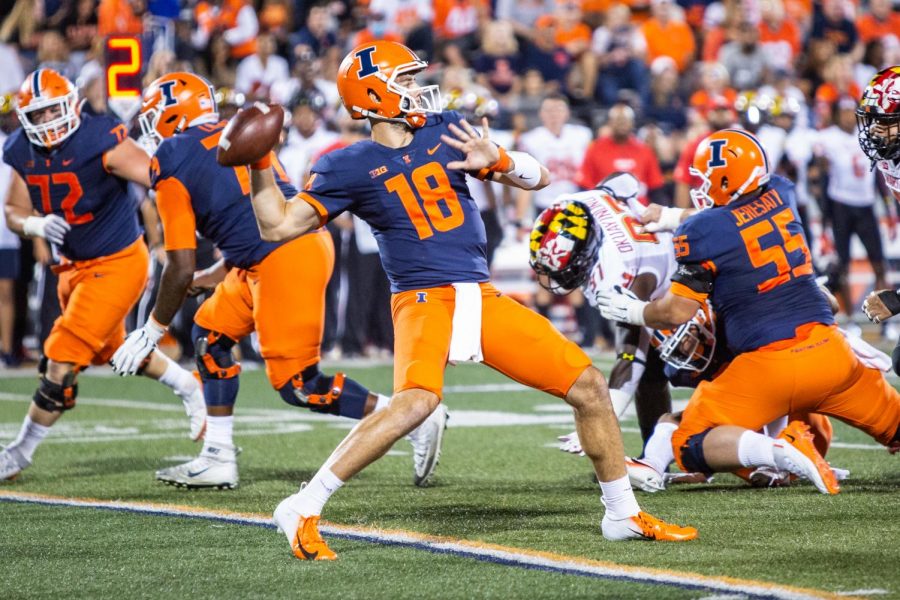 Brandon Peters gets ready to pass the ball during Illinois’ game against Maryland on Sept. 17. Peters didn’t have an ideal return from injury, tossing less than 200 yards and an interception in the Illini’s disappointing 20-17 loss to the Terrapins.

After losing two consecutive non-conference games, Illinois fell to 1-1 in Big Ten play and extended its losing streak to three games in an ugly, back-and-forth 20-17 loss to Maryland.

Illinois looked to have a handle on the game when it got the ball up 17-10 midway through the fourth quarter, but a variety of late-game miscues let the game slip through the Illini’s hands.

Peters returned for the first time since game one but provided one of his worst performances in an Illini uniform. Bielema clearly intended to set the tone by stretching the field with him as he looked toward deep passes early, but Peters couldn’t connect on anything.

On the day, Peters went 10 of 26 for 185 yards and an interception, looking almost helpless at points. Part of it came from the pressure Maryland brought, as he seemed to be under duress for almost the entire game in the absence of protection from injured center Doug Kramer. By the end of it, Peters had absorbed six sacks and certainly looked like it, too.

By the fourth quarter, it was bad enough that backup Artur Sitkowski was warming up on the sideline. While Sitkowski did an admirable job filling in for Peters while he was injured, his last two showings against UTSA and Virginia were abysmal. Even considering putting Sitkowski in the game over a healthy Peters speaks to how desperate the Illini were by game’s end.

Illinois has a running game?

For as bad as the passing game has been, the Illini seemed to finally have an established run game– until top two backs Josh McCray and Chase Brown both got hurt in the third quarter. Even after that, Reggie Love III and Casey Washington combined for the most exciting run play of the game in which Love rushed for 24 yards before fumbling it and Washington recovered it for a 30-yard touchdown rush.

Peters dragged the rushing total down with -31 yards on all the sacks he took, yet the Illini managed 150 yards on the ground, their second-highest total of the season. Both Brown and McCray racked up roughly 60 yards apiece on good efficiency in only three quarters, so there may be hope for Illinois’ ground game if they aren’t out for an extended period.

Over half of McCray’s 60 yards on the ground came from one of the more impressive touchdown runs I’ve seen, in which McCray bulldozed through Maryland’s defense for 38 yards. McCray is a true freshman and is quickly making his bid to be the lead back at Illinois for years to come.

If it weren’t for the potent running game, Illinois might not have scored at all. Even still, one of the touchdowns came on the aforementioned broken play where Casey Washington recovered a fumble and ran it 30 yards. Excluding that, Illinois had exactly one legitimate touchdown drive, which simply is not going to cut it in the Big Ten.

Quarterback play simply needs to be better, and while I’m not inspired with either Peters or Sitkowski at the moment, one of them will need to step up if Illinois wants to accomplish anything this year.

Ultimately, the losing points came in part because the Illinois offense put the defense in awful field position. Peters got sacked twice on his last drive of the game and then proceeded to move Illinois even further back with an intentional grounding penalty.

Things got ugly in the fourth quarter, but holding Maryland to 20 points is an accomplishment in its own right. They scored 30 and 62 points in the previous two games, respectively. Today, the score was tied at 3 going into halftime. That’s not to say things went perfectly, but 20 points is the lowest scoring total the porous Illini defense has given up all year.

Until late, the defense mostly gave up big plays but clamped up in the red zone. Realistically, the secondary is the reason the defense gets a B because Maryland’s quarterback, Taulia Tagovailoa, torched the Illinois secondary for 350 yards. Maryland’s last two drives did in the tired defense, as Tagovailoa completed four passes of 15+ yards.

Some things went well, like Blake Hayes punting near-perfectly to put the Maryland offense on their own 2-yard line early in the game. Other things didn’t, like Illinois having a short field goal attempt blocked that can only haunt them now after losing by 3. Hayes is possibly the best punter in the country, but until another part of the roster steps up, he will continue to be a footnote after losses.