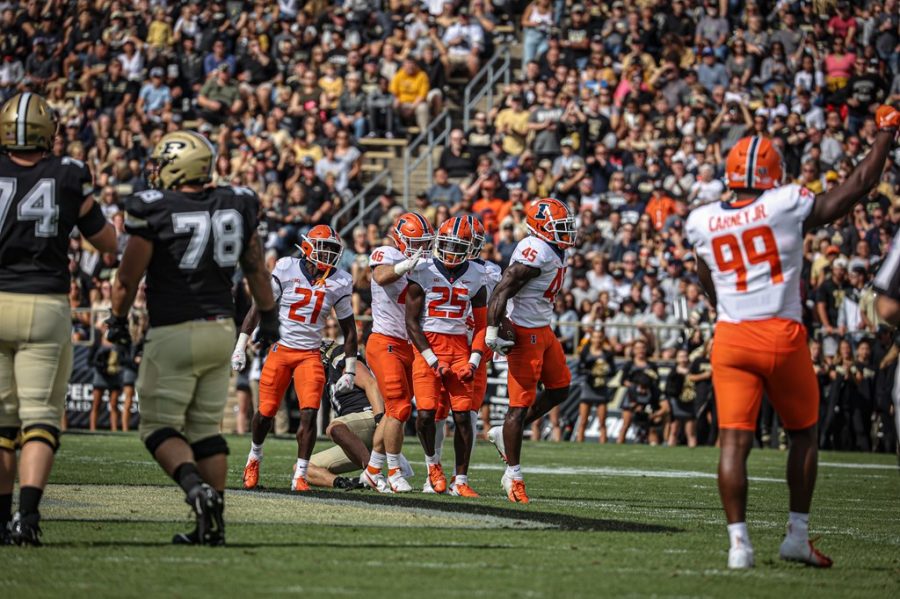 Kerby Joseph celebrates after making a big play during the game against Purdue on Saturday. Despite the loss, the Illini defense has shown tremendous improvements over the last two weeks.

While this Illini program certainly won’t be winning any titles or setting any positive records this season, the defensive unit has kept this team in games over the last two weeks. While Illinois may not have won either matchup, the defense has done its job.

After allowing over 100 total points across the first three games, the Illini gave up 20 points to an undefeated Maryland team that boasts one of the best quarterbacks and wide receiver duos in the Big Ten and allowed 13 points — and only one touchdown — on the road to Purdue. While sitting second to last in the Big Ten in yards allowed per game at 448.2, the Illinois defense has been able to get stops and shut down offenses when it needs to most.

Heading into Saturday’s game in West Lafayette, things looked concerning after defensive starters Devon Witherspoon and Jake Hansen were not dressed and did not play. Despite the pair being out, Illinois forced two turnovers while allowing its fewest yards so far this season.

“We’re bringing energy to the field,” said defensive back Sydney Brown. “I think, as a defense, we’ve got this whir around us right now that when we make plays, it feeds into the offense.”

Over five games, the defense has forced eight turnovers, with the ensuing offensive possessions resulting in three punts, two field goals, one touchdown, one interception and one turnover on downs.

In the two drives that followed the interceptions by Kerby Joseph and Tony Adams on Saturday, Illinois managed to score three points. On the first turnover, Joseph’s pick in the end zone, the Illini drove 53 yards down the field on six plays, which culminated in a 45-yard James McCourt field goal, one of three on the day.

Prior to Joseph’s interception, Purdue had opted to make adjustments at quarterback, putting in Aidan O’Connell in place of the struggling Jack Plummer. O’Connell stepped in and looked comfortable, completing a 43-yard pass in his second throw of the game.

With the Boilermakers down to the Illini 4 and the game still tied at 6, Joseph made a big play to halt a dangerous drive that nearly led to the first touchdown of the afternoon.

“Just following the QB’s eyes,” Joseph said when recounting the interception. “He’s telling a story; it’s up to us to listen. I saw it; I just went to go get it.”

The second drive wasn’t as successful despite the offense getting the ball near midfield. Five plays and 20 yards later, the Illini found themselves at the Boilermaker 34 and, somewhat controversially, chose to punt the ball away.

Bielema’s decisions to punt in the fourth quarter in opposing territory in each of the last two games shows that he trusts his defense, and though the Illini allowed a touchdown following both punts, the defensive confidence is something that should hopefully be a sign of optimism going forward.

Though the offense hasn’t been able to convert on the defensive momentum, holding two conference teams to a combined 30 points over the last two games should signal that things are turning around in Champaign under defensive coordinator Ryan Walters.