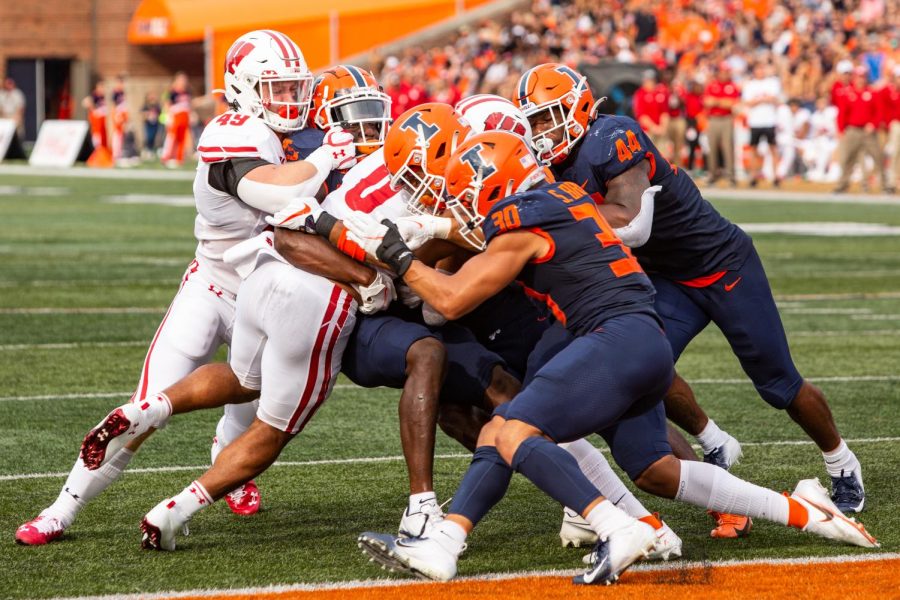 Illinois tackles a Wisconsin running back at the goal line in the second half of the Homecoming game against Wisconsin.

The Illinois football team fell to Wisconsin, 24-0, in its Homecoming game.

The Illini were shut out, making this their worst scoring effort of the season. Wisconsin stacked the box throughout the game to deny Illinois the ability to run, and the passing game was unable to get off the ground.

“We weren’t protecting our quarterback,” said head coach Bret Bielema. “We’ve got people under duress. BP got hit, don’t know his status yet. Put Art (Sitkowski) in there. I think he was hit a couple times, too. I think it all starts with our protection before we can even get to the point of schematics.”

Illinois opened its first drive with three pass plays, but Wisconsin was able to put pressure on starting quarterback Brandon Peters to force a three-and-out.

Although Wisconsin’s offense had struggled in recent weeks, they came out strong today. The Badgers’ first seven plays were all runs, but predictability didn’t seem to matter much as they overpowered the Illinois defensive line. Ultimately, Wisconsin got all the way down to the Illinois 7-yard line before the Illini defense woke up and held them to just a field goal.

The Illinois offense continued with its game plan on the next drive, attempting three pass plays. The results were no better, as the Illini were forced into another three-and-out with Peters being sacked on their third-down play.

Wisconsin began another drive similar to its first-quarter march down the field, but this time Kerby Joseph came out of nowhere and intercepted a deep pass by Wisconsin quarterback Graham Mertz.

The Illini were forced to start their next drive on their own 3-yard line and continued to struggle to gain any yardage. Josh McCray was held at the line of scrimmage on a first-down rush and lost two yards when they gave him the ball again on second down. With the Illini pinned on their own one yard line on third down, they opted to pass and were bailed out by a pass interference call to put them on their own 16 yard-line.

From that point, the Illini failed to register another first down and were forced to punt. Wisconsin took advantage and put together another strong drive on 13 rush plays and just one passing play to score a touchdown that put them up 10-0.

At this point, Illinois was midway through the second quarter and only had six total yards of offense on the day. Facing a grim situation, Bielema opted to put in Artur Sitkowski at quarterback.

Sitkowski had played well in his relief of Peters after he got hurt in game one but struggled in his two starts afterward. In the first half, those struggles continued.

On his first drive, Sitkowski went 0-for-4, with a pass interference call being the only occasion in which Illinois earned a first down. Wisconsin then went three-and-out, but Illinois failed to capitalize.

Chase Brown opened up the next drive with a 23-yard run, but Sitkowski proceeded to go 0-for-3 on his next few pass attempts and forced a punt, which ultimately led into halftime. Illinois was in a 10-point hole with just 33 yards of offense to Wisconsin’s 206.

“I mean (Peters and Sitkowski) both bring really good energy,” Brown said. “I trust them both, love both of them to death. Throughout the week, we actually take reps with both of them, so nothing really changes that much as far as the playbook, but it’s just unfortunate that we couldn’t get much going.”

Wisconsin continued its streak of dominance as it began the second half on a productive drive that led to a touchdown to go up 17-0. This time, the Badgers incorporated more variance within their offense with a variety of pass and run plays.

Illinois struggled offensively on its next possession and went three-and-out. But, Tarique Barnes forced a fumble that was recovered by Joseph. Despite the momentum from the defense, Sitkowski still could not complete a single pass and went 0-4 on attempts on the drive.

At this point, the game got out of hand as Wisconsin went down the field yet again for a touchdown to go up 24-0, the same scoreline that the game finished with.

Sitkowski went 8-for-27 while throwing for 55 yards, while Peters went 3-for-7 for 12 yards before being removed. Illinois mustered up 93 total yards, while the visitors racked up 491 yards.

“I mean (the loss) doesn’t sit well,” Brown said. “I hope the guys find a way to rally together, (and) just learn from it. Like you said, confidence is a big thing. Coming off a win last week against Charlotte, we don’t come to the Big Ten to win against out-of-conference teams. We come to win Big Ten games. I just hope that everybody learns from it. I hope it doesn’t sit well with anybody (that) we were shut out on Homecoming. It makes me feel sick.”