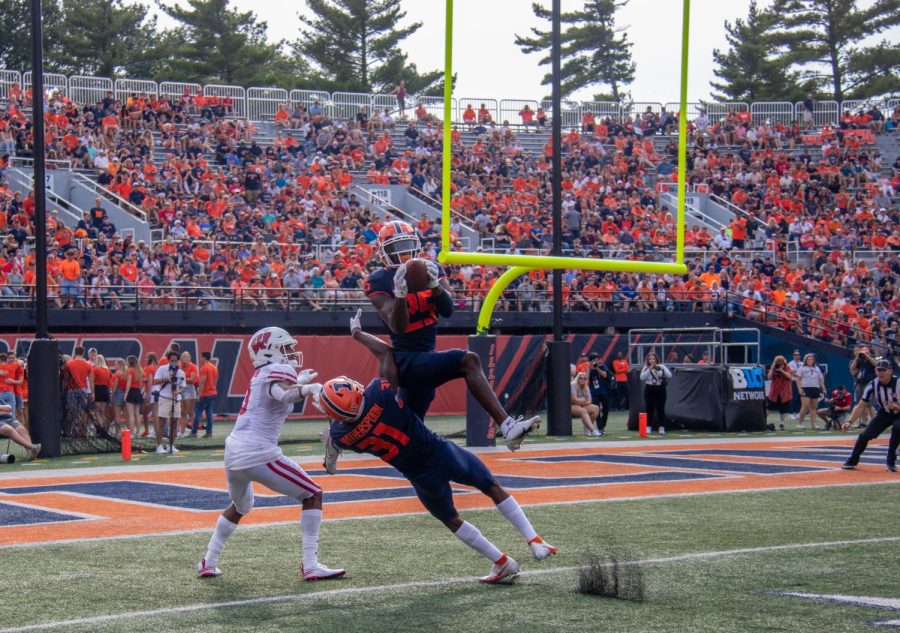 Kerby Joseph intercepts a pass from Wisconsin’s Graham Mertz on Saturday at Memorial Stadium. Joseph was one of the few bright spots in the Illini’s ugly 24-0 loss on Homecoming weekend.

Well, there isn’t a nice way to say it, but it needs to be said: Illinois football looked absolutely abysmal against Wisconsin on Saturday. Getting blown out 24-0 on Homecoming in a winnable matchup isn’t something that brings joy to the fan base, but it is reality. And sometimes facing reality is the only way toward building a better one.

Illinois sits at 2-5 heading into its first bye week, one that will undoubtedly be full of reflection and reassessment from top to bottom internally. In the time being, I’m going to do some assessment of my own and dive into what I liked and didn’t like about Illinois’ showing against Wisconsin.

Even in arguably the ugliest loss of the season, there are reasons for optimism, and Kerby Joseph is Exhibit A. Joseph had recorded an interception or fumble in each of the last four games before this weekend and then proceeded to pick up one of each on Saturday.

Both plays had the potential to be game-changing, and the interception especially kept the Illini in the game early on. At the time, Illinois was only down 3-0 early in the second quarter, and Wisconsin quarterback Graham Mertz wound up for a deep pass that would’ve gone for a touchdown if caught. Joseph read the situation and made a play on the ball to keep the score tight and give the ball back to the offense.

The fumble recovery came late in the third quarter with Illinois down 17-0, but it did give the Illini some semblance of a chance had they been able to score afterward. Wisconsin was deep in Illinois territory at the time, so Joseph’s situational play helped prevent a score to keep the game from getting out of hand too quickly.

Nobody will confuse Brown’s 35-yard performance on Saturday with his 257-yard game last week against Charlotte, but that doesn’t mean his day wasn’t fruitless. Wisconsin stacked the box for virtually the entire game, and in spite of it, Brown broke free for Illinois’ biggest yardage play of the game on a 23-yard rush.

The longest run any other Illinois player had was Josh McCray’s three yards, so it’s hard to blame Brown for not being great individually when the team was collectively struggling. The good news is Brown knew it himself and was the first to say the offense needs to be better after the game.

The better news might be that Brown came out and acknowledged what many were thinking after the game.

“I mean (the loss) doesn’t sit well,” Brown said. “We don’t come to the Big Ten to win against out of conference teams; we come to win Big Ten games. I just hope that everybody learns from it. I hope it doesn’t sit well with anybody (that) we were shut out on Homecoming. It makes me feel sick.”

I could write a diatribe on the play of Brandon Peters and Artur Sitkowski, but the stats speak louder than any amount of words could. Peters went 3-for-7 for 12 yards before getting hurt. Sitkowski was somehow arguably worse, registering 12 consecutive incompletions from his time entering the game en route to an 8-for-27 performance in which many of his completions came in garbage time.

As easy as it would be to blame the subpar quarterback play on the quarterbacks themselves, that simply wasn’t the full picture this Saturday. Both Peters and Sitkowski were almost constantly under pressure, with a hit to Peters being what ultimately knocked him out of the game altogether. When the line can’t give Peters or Sitkowski time to make plays, the rest of the offense crumbles.

Bielema knew as much when addressing the media after the game.

“Before getting into the schematic of throwing and catching, we weren’t protecting our quarterback,” Bielema said. “We’ve got people under duress. BP got hit, don’t know his status yet. Put Art in there. I think he was hit a couple times, too. I think it all starts with our protection before we can even get to the point of schematics.”

I get it. Wisconsin stacked the box and made it difficult to successfully run the ball. That doesn’t mean Illinois has the flexibility to reinvent itself on the fly. Last week, Illinois passed the ball 20 times and ran it 50 times. The week before, Illinois passed 27 times compared to 40 rushes. This week, Illinois had 34 passing attempts and just 13 running attempts, making it the fewest rushes by Illinois in a game this season.

After the game, Bielema chalked the different look as being reactionary to Wisconsin’s defense. Given that the Illini got shut out, it might be worth sticking to their identity as a running team moving forward.

As there would be with any team that’s 2-5, there is a lot of valid criticism of Illinois at this point.

Bielema was brought in to turn the Illinois program around, but turning around a college program takes time. Illinois did a lot of losing last year and seems to be on a similar path this season, but there is hope for a better record next year once Bielema has his first recruiting class in Illinois uniforms. Until then, the Illini have a week off to reset and try to make the best of a bumpy season.