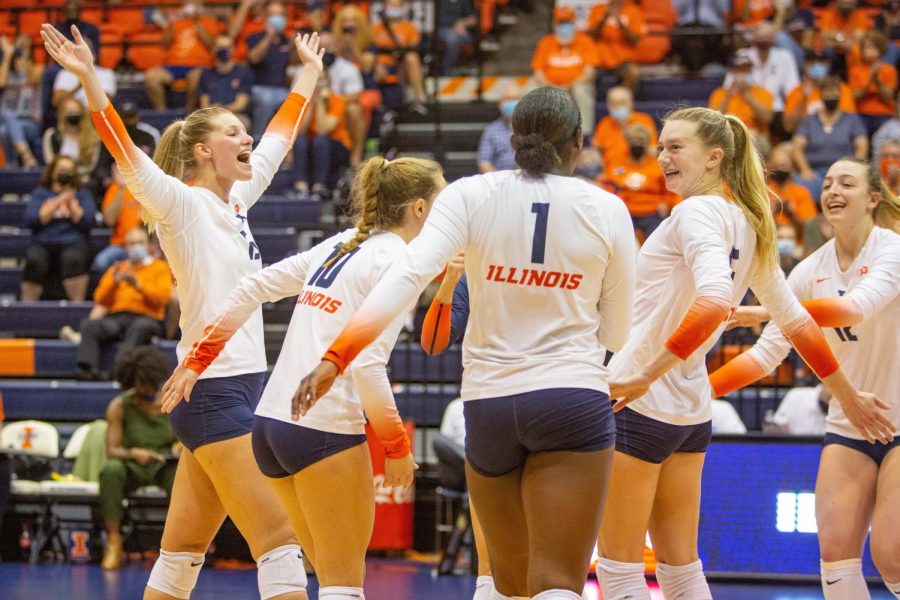 Illinois celebrates after scoring a point against Purdue on Oct. 6 at Huff Hall. The Illini welcome the Iowa Hawkeyes to town on Wednesday and look to snap a three-match skid.

After three straight losses to top-10 programs, Illinois returns to Huff Hall on Wednesday to take on the Iowa Hawkeyes, the first time in over two weeks that the Illini will face an unranked team.

The Illini sit at 11-6 overall and 3-3 in conference, though all six of the team’s losses have come against opponents that have been ranked at some point this season.

Illinois enters the midweek match coming off a loss in Madison to No. 3 Wisconsin. Though the Illini were able to win the first set, they couldn’t do enough to contain a loaded Badger attack that featured three preseason All-Big Ten first-teamers.

Iowa heads to Champaign on an eight-match losing streak, with the Hawkeyes most recently falling to No. 6 Purdue in straight sets at home. Though they sit at 2-14 overall and 0-6 in Big Ten action, the Hawkeyes also have had a tough schedule, as they have faced Purdue, Wisconsin and Nebraska, along with Michigan, Michigan State and Illinois, to open their conference slate.

The Hawkeyes are led by senior right side hitter Courtney Buzzerio, who leads the team in kills (246) and points (267) while sitting second in the conference in kills per set and third in points per set.

Though Buzzerio is the most dangerous Hawkeye on offense, sophomore setter Bailey Ortega has had an impressive start to the season, tallying 494 assists through 16 matches, while senior defensive specialist Maddie Slagle leads the team in digs (190) and senior middle blocker Hannah Clayton has a team-high 30 blocks.

The two teams have already played once this season, with the Illini taking down the Hawkeyes in five sets in Coralville on Sept. 22. Illinois won the second and third sets before dominating the fifth set, 15-5, in its first match of Big Ten play this season. Buzzerio registered a match-high 24 kills, while the Illini were led by graduate student outside hitter Megan Cooney’s 17 kills and three aces.

For Illinois, sophomore outside hitter Raina Terry and Cooney have led the Illini attack with 209 and 204 kills, respectively, while redshirt junior setter Diana Brown has a team-high 671 assists, senior defensive specialist Taylor Kuper leads the team in digs with 301, which is 12 shy of tying her career high of 313. Junior middle blockers Kennedy Collins and Kyla Swanson have been dominant at the net, with 67.0 and 56.0 total blocks, respectively, through 17 matches this season.

Illinois leads the all-time series, 67-14, and received votes in the weekly American Volleyball Coaches Association rankings, sitting at No. 26 in the poll as the seventh-highest-ranked Big Ten team.

Wednesday’s match will be played at 7 p.m. in Champaign, with the Illini then heading to Lincoln on Saturday to take on No. 9 Nebraska.