Illinois football needs to put the pieces together 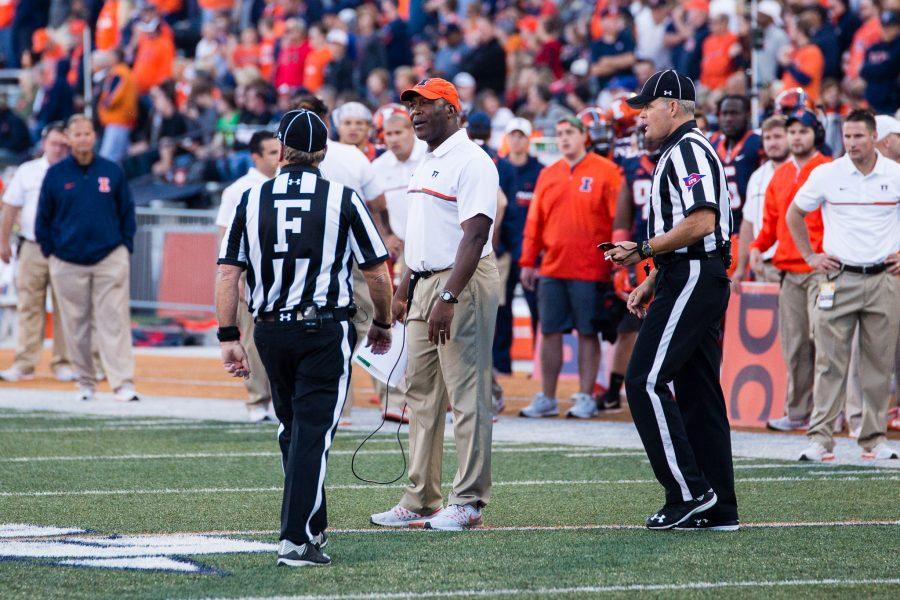 Illinois head coach Lovie Smith talks to the refs after a penalty during the game against Purdue at Memorial Stadium on October 8. The Illini lost 34-31.

Where does one even begin with this loss?

Illini fans can’t put the entire loss on Chase McLaughlin. The kicker had been perfect up until his missed field goal as the game ended and went to overtime. It’s unfortunate, but statistically, he’s bound to miss a little and it just happened at an unfortunate time.

Illini fans also can’t put the entire loss on Chayce Crouch. He came in as a backup quarterback and played as strong, if not stronger, than anyone anticipated. Head coach Lovie Smith has been preaching the next man up strategy all season.

Today, it finally seemed to come to fruition. He went 137 yards on the ground with two touchdowns. He threw 10 for 14 with 142 yards, including a one handed miracle catch from receiver Malik Turner.

Smith said Crouch was outstanding for the position he was in.

When Crouch took over in the second quarter, he gave life to the Illini with a 26-yard rushing touchdown.

He was reminiscent of former quarterback Reilly O’Toole, who would do anything to move the chains in his senior season two years ago.

It wasn’t always pretty, and if he keeps it up, there will be a day when the Illini will likely have to go to their third string.

But there was an offensive passion that hasn’t really been seen all season. The numbers were not spectacular, but you could tell they wanted that win badly and were not going down without a fight.

The fourth quarter was the most exciting Illini fans have seen this season, even if it was against one of the worst teams in the Big Ten.

The Illini were fired up and trash talking after the roughing the passer call and once more after they scored. But the defense couldn’t hold the momentum, and Purdue tied with a touchdown on the next drive.

The possession battle was about even, which was an improvement after last week’s dreadful time deficiency where the defense was out there for almost double the time of the offense.

For the first time this season, it was the offense that showed composure, minus the last 30 seconds and overtime.

The defense couldn’t stop the third down — Purdue went 9-of-16 on third down attempts. Each time, the Illini made an important stop, it seemed the Boilermakers would break free for a critical first down.

However, if Smith wants a win, he’s going to have to figure out a way to put the two sides together.

Crouch can’t flip into the end zone on every play. McLaughlin can not make every field goal. And Smoot can’t make every sack.

There needs to be a cohesive sense of play on both sides of the ball.