What Illini sports have taught me 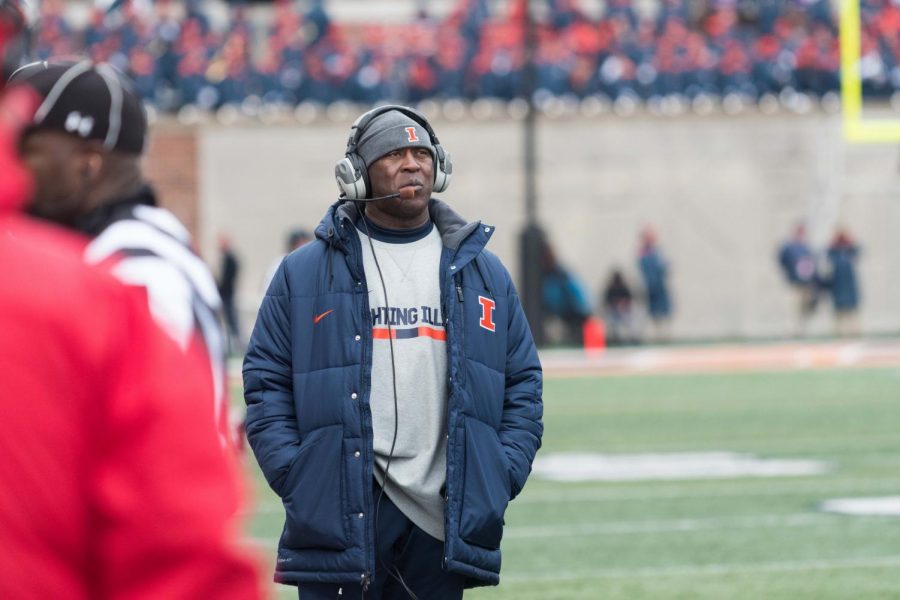 Illinois head coach Lovie Smith looks out over the field during the game against Wisconsin on Saturday, Oct 28. The Illini lost 10-24.

This week marks the start of my final semester at the University of Illinois, and with it, my last few months with the Daily Illini.

While winter break provided a much-need hiatus from schoolwork, it brought on a lot of questions like, “What is the plan after you graduate?”

It was when I needed to respond to those questions that I realized just how much covering Illinois sports has taught me. The people asking me these questions wanted me to be as thorough as possible, but I wasn’t feeling that.

Instead of giving detailed answers about my plan, I took the Lovie Smith approach.

I have a full plan of what I want to do as soon as I am out, just like Smith has a plan for the Illini’s next football season, but is he about to stand at a press conference and reveal his plan? No. He is going to be short in all of his answers, and keep his cards close to his chest. The empty spots in the coaching staff are the perfect example of this. I think he has had his guys for those roles for a long time now.

But in the meantime, he is going to give answers that give just the right amount of information without giving everything away.

Apparently, for the past two years, I have been unintentionally studying this technique. When the questions about my future started flying, I channeled what I have learned and kept my cards as close to my chest as I possibly could.

Sure, my friends and relatives may have been left frustrated and wanting more. They may have followed it up with more questions, but I stuck to my guns and played the quiet but professional card over and over again. It was the same play that Smith ran on me and everybody else at the press conferences all the time.

After realizing how much I had taken away from covering football at the University that wasn’t journalism- related, I decided to look back on my time with other sports I’ve covered and see what else I learned.

In the spring of my freshman year, I covered the softball team. Back then, it was coached by Terri Sullivan, and what always stood out to me about not only her, but her whole team, was the sense of relentless optimism that they all shared. They truly believed they were going to get to the level they wanted to be at eventually, despite finishing one game under .500 and exiting after the first round of the Big Ten Tournament.

Throughout that entire season, Sullivan believed that her team could make the NCAA Tournament as soon as they made it over the hump. She was probably the most optimistic person I have ever met and definitely the first head coach I ever saw to get genuinely excited when she saw a reporter coming to ask her questions.

And despite the fact that she isn’t coaching here anymore, she was right to be optimistic. At the time, the Illini were only one season away from making back-to-back NCAA Tournament appearances.

Sullivan was just the tip of the iceberg with that optimism when it comes to Illinois sports. Basically every sport I have covered while I’ve gone to school has struggled. Maybe it’s my fault, but anyway, the Illini are always positive that it will work out.

And so far, they are on the right track.

Football is slowly improving, baseball is on its way back after a short rebuild and basketball is just so, so close.

Illinois sports have taught me that blind optimism is necessary, because as long as you work hard, things will eventually work out. You just have to stick with it.

If the Smith approach doesn’t work, then I will just start spewing happiness at the person until they are convinced.

So if you ask me about what my plan is when I graduate, you already know what the answer is going to be, and you have Illinois sports to thank for that.