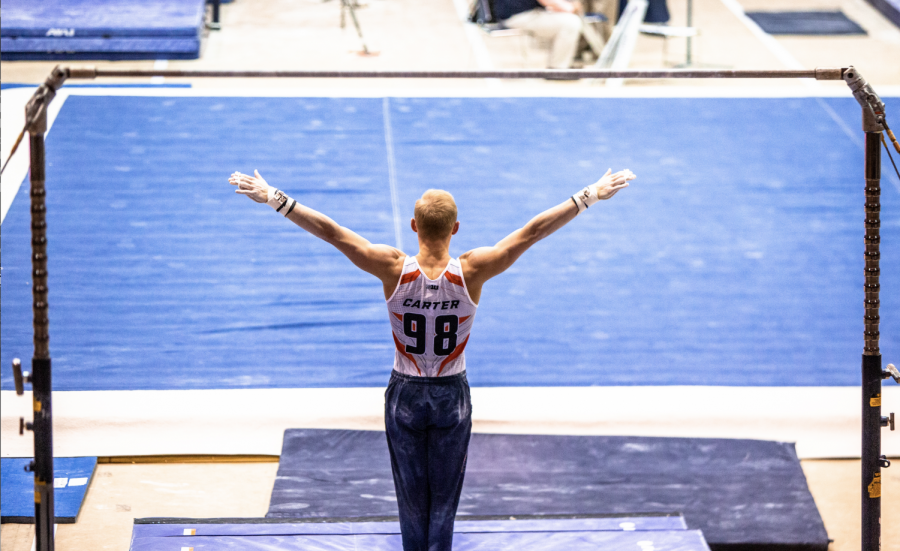 Junior gymnast Hamish Carter finishes his high bar routine and poses for the judges at Huff Hall on Saturday. Carter was named Male Gymnist of the week by the CGA and Big Ten.

Following a stellar return to the all-around competition against Ohio State on Saturday, which included two event titles, Illinois’ Hamish Carter has been named Male Gymnast of the Week by both the College Gymnastics Association and the Big Ten Conference.

“It was a good start to my all-around performances,” Carter said. “I was happy to put in a solid all-around score. I had a bit of a shaky start on floor in my first event, but I managed to compose myself and get back in the game. It set me up very well for how I’m going to be performing in all-around this season.”

“Hamish came out swinging. He had some really great high points for us,” said head coach Justin Spring. “That was great to see, and he’s only getting started. He’s only going to get better from here, and I’m looking forward to an exciting season (from him).”

Carter’s high bar performance was a much-needed hit for the team. Entering the final rotation of the meet, with Illinois on high bar and Ohio State on parallel bars, Illinois led Ohio State 337.900-334.650. Ohio State had just scored a 62.900 on high bar, leaving the door open for Illinois to do better. Sophomore Evan Manivong started the event for Illinois with a 13.30, outscoring all Ohio State gymnasts except Tyndall.

But the next three Illini gymnasts to perform all fell during their routines. Their scores were all a full point lower than Manivong’s score. Carter was next, and Spring described his routine as “must hit.” Ohio State wasn’t too far behind Illinois and could’ve easily made up the point differential on parallel bars.

“This is where battle-tested teams can give away meets, and we were about ready to do that,” Spring said. “But here comes Hamish. Not only was he in that tough spot, but he’s got the hardest routine. But he was the guy who could put up a big score and he did exactly that. He crushed it and did exactly what we needed to turn that momentum around.”

“High bar is one of my best events and I’ve been competing at a high level both internationally and in college,” Carter said. “I’m still going for a clean set, no matter if the four guys before me have slayed their routines or if all of them have fallen. The job doesn’t change.”

Spring described Carter as one of his clutch players — someone who can perform well at a critical moment and who can be trusted to come through in that critical moment.

“Hamish is that guy who can step up and is someone I can count on,” Spring said. “He’s the one where, if it’s a super high-pressure situation, time and time again, he’s shown that he can perform his best.”

With Carter’s clutch performance on high bar and the momentum swinging back in Illinois’ favor, senior Jordan Kovach followed Carter with a 13.30 to secure the victory for the Illini.