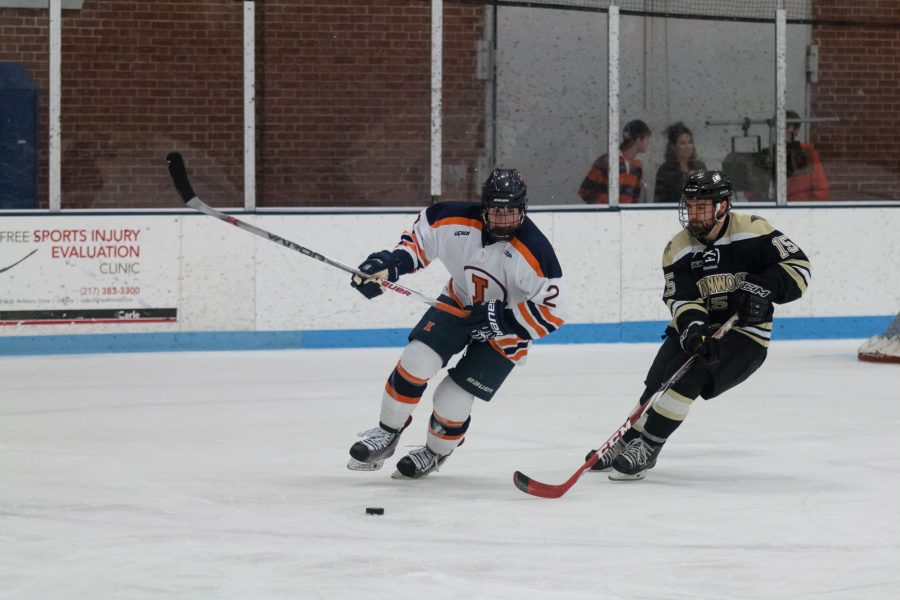 Illinois' Joey Ritondale fights for the puck during the game against Lindenwold University at the Ice Arena on Saturday, January 30. The Illini lost 4-1.

Quick notes: Illinois will be making its home opener debut.

Hidden stat: The Illini defeated the Spartans twice in the first series of last season.

Joey Ritondale was sitting in the film room watching a tape of Michigan State with the rest of his Illinois hockey team Sept. 12 when head coach Nick Fabbrini told the team he had an announcement to make: Ritondale would be the team’s captain for the upcoming season.

“I was definitely surprised,” junior defenseman Ritondale said. “I know we have a lot of good leaders on this team, and I knew a lot of people could get it, so once I heard my name, I was really excited.”

Ritondale, along with assistant captains Shaunak Pal and Tyler Opilka, are tasked to lead Illinois hockey into a new era following the graduation of captain John Olen and a disappointing season that ended in the first round of the ACHA national tournament in March.

“We have a lot of new young guys, so being an upperclassman, it’s my turn to take some of the guys under my wing and show them around,” Ritondale said. “But ultimately, I just have to do the same things that’s been working for me for the past two years.”

Ritondale’s captain status was announced after the Illini had dropped a set of preseason games at the Nelson Center in Springfield, Illinois, against the Springfield Jr. Blues. Junior center Eric Cruickshank, the team’s second-leading scorer last season with 39 points, said the losses were caused by a few costly shifts.

“We let up a combined five goals in 130 seconds,” Cruickshank said. “Get rid of those two minutes of play, and the games are 2-2. That was just a two-minute lapse where we can’t let up goals like that.”

Fabbrini says he is encouraged by the efforts of his team in Springfield, especially freshman forward Chance Homerin.

“Homerin had a really great weekend,” Fabbrini said. “He didn’t score any goals, but had some chances and played really well for us defensively.”

Fabbrini is now looking ahead to the weekend when his team travels to Bloomington, Illinois, to face Illinois State on Thursday for the season opener. They will return to Champaign for a weekend series against Michigan State’s club hockey team.

“(Michigan State) always gives us a tough game early in the year,” Fabbrini said. “They can come in and compete hard, and they’re a Big Ten school, so there’s a little bit of added pride there.”

The Illini defeated the Spartans twice in the first series of last season. Michigan State finished 10-23-4 overall and 3-10-0 away from East Lansing.

As the team looks to capitalize on defending CSCHL MVP goalie Olen’s final season for the Illini, the newly-minted captain is excited to get on the ice for the first weekend of games.

“We just have to mesh in a game situation,” Ritondale said. “We’ve played two exhibition games so far. We’ve practiced a lot, but everything changes when you get into a game. Emotions are high and everything’s just different. It’ll be a test to see how everyone’s doing, and we’re definitely going to bring it.”