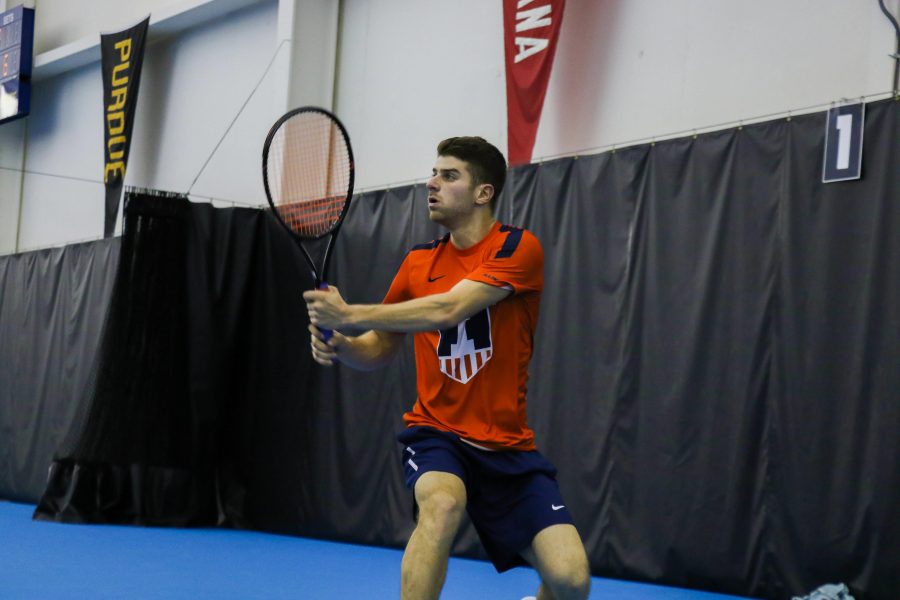 Illinois' Aron Hiltzik follows through on a swing in the meet against University of Kentucky on Friday, Feb. 24 at the Atkins Tennis Center in Urbana.

The Illinois men’s tennis team did not play a match at the Atkins Tennis Center for over a month until its matchup with Iowa on Saturday. With winds around 20 mph, it wasn’t exactly a friendly return home for the Illini.

However, the Illini adjusted, defeating Iowa 6-1.

The No. 1 and 2 doubles teams for Illinois opened with wins, clinching the doubles point for the third-straight match. The No. 1 pairing of Alex Jesse and Aleks Kovacevic had to first rally from an early deficit and then hold off a late Iowa charge to win.

From the outset, the Illini could tell that the wind would be a problem.

“It’s a huge factor. We talk a lot about how to use the wind as an advantage,” Jesse said. “When you don’t know how to play with the wind, it can be very frustrating.”

The No. 2 doubles pair of Aleks Vukic and Vuk Budic also had to withstand an up and down match, needing to win six of the final seven points in the tiebreaker to win their match.

“Doubles was really a rollercoaster,” Vukic said. “I was talking to Vuk and I said ‘I feel like we’re better players than these guys; we’ll be fine.”

The momentum from the doubles win carried over into the singles with the Illini putting two more points on the board with wins in straight sets. No. 1 Vukic and freshman singles No. 4 Noe Khlif recorded victories, putting the Illini one point away from their second-straight win.

“(The doubles wins) helped us in singles,” Vukic said. “We came out well; it was good to get this win.”

Assistant head coach Marcos Asse was happy with the win, but much like head coach Brad Dancer, he is not buying much into the idea of momentum.

“Momentum isn’t something we have the luxury to talk about,” Asse said.

Even if the coaches are not ready to talk momentum, Jesse said there was “absolutely” a sense of momentum.

“Whenever you’re putting win streaks together… you get a sense that we’re heading in the right direction,” Jesse said.

The Illini will look to continue in the direction they have been on the last two matches on Sunday when they face Nebraska at home.