The blowout loss at Wisconsin was an anomaly 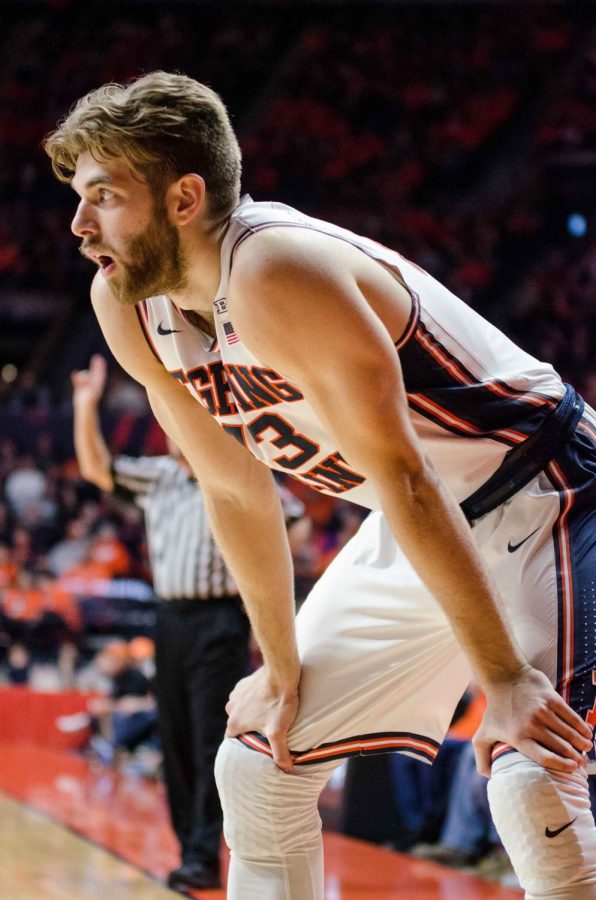 Illinois forward Michael Finke catches his breath near the sideline during the team’s 62-58 victory over Grand Canyon on Dec. 30. Finke is averaging 9.8 points per game this season.

I watched five minutes of Illinois basketball’s first matchup with Wisconsin this season.

That’s all it took for me, and everybody else watching for that matter, to realize the Illini just didn’t have it that night.

It was just one of those games where nobody had any energy. One of those games is bound to happen to every team, every season, especially to a young team like the Illini. Even the best teams in the nation have those games. They are just talented enough to still win, so it goes under the radar.

I have seen a ton of those games where nothing goes right and where the energy from a team is awful. I have been on that team. Trust me, it sucks more for the players than it does for the fans.

I am not going to say this is a different Illini team, because it isn’t. This is the same Illini team that lost by 25 to the Badgers. It just happened to be this team’s worst game of the season so far. The Illini bounced back immediately, and when you see that, you know that the first game was just an anomaly.

Back when I played (that makes me sound super old) the dud game only ever happened once, and in the end, it helped my team because we knew there was nowhere to go but up.

I don’t know if they can beat Wisconsin on Thursday, mainly because no matter how much effort the Illini bring to the floor, I am not sure that they can contain Ethan Happ enough to pull out the win.

That guy is an absolute monster. I am genuinely interested to see the scheme that Brad Underwood brings to the table in the first few minutes. The pressure they brought against Michigan State was really strong, but the second line that needed to defend the basket was nonexistent against that insanely athletic Spartans team. I think that scheme could work really well against a Wisconsin team that is weak at almost every spot of the floor besides where Happ is standing. But, if the guards are able to get to the paint, the Illini might be in trouble since Happ can hit from anywhere inside the arc.

That is a lot of pressure to put on a team for 40 minutes.

There have been times where Happ gets triple-teamed out there, and there have been teams that play him straight up. I’d like to see an improved version of that Michigan State defense. When I was watching it, I knew that was the defense I’d be watching for the rest of Underwood’s time here at Illinois, and if they can get it down, there is nothing more exciting.

If they can work out the problems that arise when even a single defender gets beat, they can really be a force.

But while I care a lot about the defense the Illini start with and the adjustments they make, I really am going to be watching Leron Black all night. He is going to score, no doubt in my mind about that, but if the Illini want to win, they need to make sure that he plays solid defense on Happ without fouling.

The Illini need a full game from Leron Black, whatever that may be. He is at 25 minutes per game right now. I would like that to be well-north of 30 minutes. That way he can maximize his effectiveness on the offensive end.

Overall, I think it’s crazy to think this game will be anything like the last, but I still don’t know if the Illini can pull off the win. Either way, though, I am expecting a fun game.