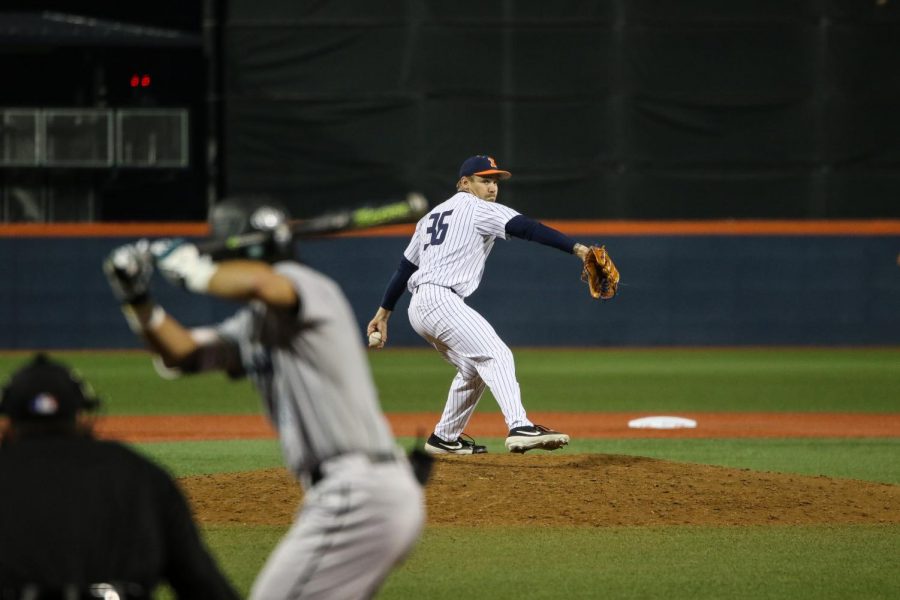 Illini pitcher Josh Harris pitches to a Chanticleer batter in the fifth inning. Harris got the win for Illinois, improving his record to 2-1 this season.

In a game Tuesday evening, Illinois hosted No. 19 Coastal Carolina in the first of a two-game series. Earlier this year, the Illini lost to the Chanticleers in an 11-3 drubbing.

On Tuesday, Illinois bounced back and took the first game of the series, beating Coastal Carolina 4-2.

“The game of baseball is tough. We’ve done a lot of good things the entire season,” said head coach Dan Hartleb. “We were fortunate tonight. A lot of things, I want to say, went our way. But we went out and just did a great job.”

The Illini scored all four of their runs in the first inning, with two of those coming off of a home run from freshman second baseman Branden Comia. It was a bounce-back performance for Comia, who was the final out against Iowa on Sunday when he had an opportunity to tie or win the game with bases loaded.

Tuesday’s game belonged to the Illini pitching staff. Freshman starter Aidan Maldonado allowed just two earned runs over four innings and the bullpen gave up only two hits the rest of the way. The performance came against a Coastal Carolina team that is seventh in runs per game and 10th in slugging percentage among all Division I schools.

The standout performance from the pitchers came from sophomore reliever Josh Harris, who entered the game in the fifth inning with bases loaded and no outs. Harris would retire the next three batters, striking out two and allowing no runs to cross. Hartleb had praise for his pitcher: “The performance from Josh Harris was outstanding.”

Harris was also a player who had a bounce-back game, as he allowed four hits, three walks and three runs last week and took the loss against Indiana State.

Harris said being put on the spot gave him an extra boost of confidence.

“It means a lot to me,” Harris said. “Because of those last two outings, I didn’t know if I’d get pushed back in the bullpen … He still called on me … It means a lot.”

Later this week, Illinois will host Maryland for another round of conference play during Moms Weekend.