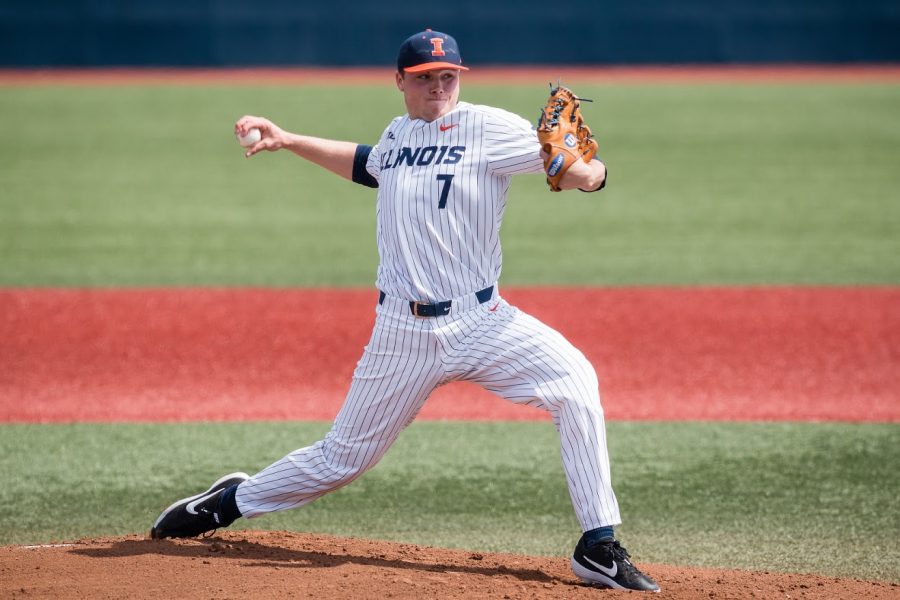 Illinois starting pitcher Ty Weber (7) delivers the pitch during game one of the doubleheader against Maryland at Illinois Field on Saturday, April 6, 2019. The Illini won 5-1.

After taking a loss at the hands of Illinois State last Tuesday, the Illinois baseball team got back in the win column against Minnesota over the weekend. During the three-game series, their third in the conference, the Illini looked strong once again against the Golden Gophers.

The Illini came out and set the tone early in game one of the series, helped in large part by starting pitcher Andy Fisher. The redshirt senior has been having a strong 2019 season and continued it Sunday with six innings of two-run ball.

Fisher was knocked around a bit to the tune of 10 hits from the Golden Gophers, but he was able to evade major trouble, allowing just a single run in each the second and third innings. But it was smooth sailing from there on. Fisher made it through the sixth and the bullpen carried Illinois from there.

The trio of redshirt seniors Sean Leland, Quinten Sefcik and junior Garrett Acton closed out the game, allowing just one more baserunner — a walk issued by Sefcik in the eighth — and the Illini won 4-2.

Offensively, the Illini racked up 12 hits, including doubles by junior Ben Troike, who had four total hits, and freshman Cam McDonald, who had three total hits. Junior hitter Michael Massey missed both games due to injury.

“Our guys did a really good job today,” said head coach Dan Hartleb. “We came out and beat a good pitcher in the first game and that set the tone. Really, really good wins. Today was a good day for us in a lot of areas.”

Illinois kept the good times rolling in the second game of the series. The Illini had only two extra-base hits with a home run from redshirt senior Zac Taylor and a double from redshirt sophomore Andrew Dyke on the day but were still able to put up 13 runs against Minnesota, seven coming off Gophers starter Jake Stevenson.

During the first two games, the Illini stranded 26 runners and still managed to score 17 runs.

Unfortunately, after their pair of doubleheader wins Sunday, the Illini couldn’t secure the sweep on Monday and dropped the contest 5-4.

It was a tough loss for Illinois, which was leading 4-1 going into the bottom of the seventh inning. Starter junior Cyrillo Watson went five innings, allowing just one run. But the seventh inning was when things fell apart, starting in the inning when Sefcik allowed two runs on three hits.

But the Illini still had the lead 4-3 and had a chance to hold on. But freshman pitcher Nathan Lavender allowed the next two runs in the eighth on the back of three walks, he recorded just one out and the loss.

“We beat ourselves,” Hartleb said. “There’s no doubt about it. Not much more you can say about it.”

Next up, the Illini host Bradley for a one-game series on Tuesday and then host another weekend conference series against Penn State. Penn State has lost four in a row and was recently swept by Nebraska in a three-game series.