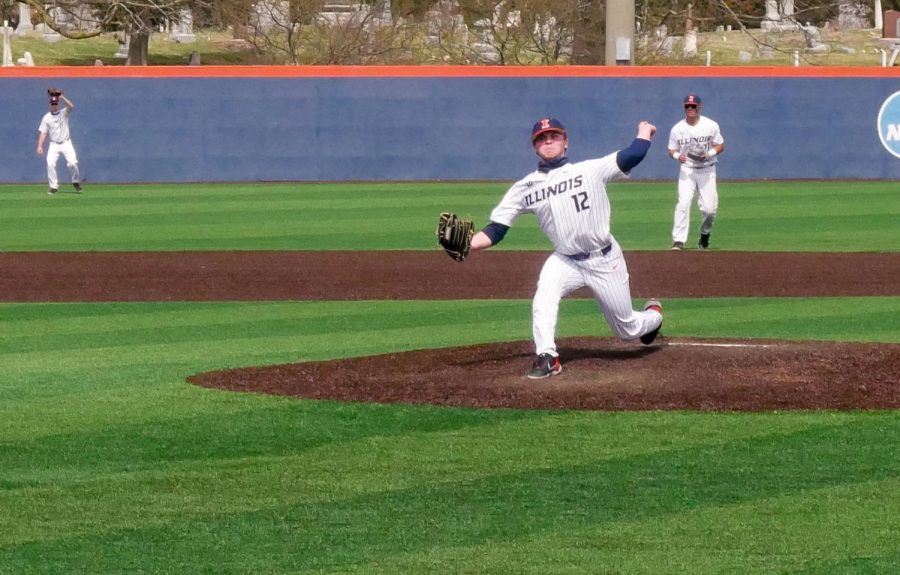 Freshman Peyton Hutchings pitches in a game against Northwestern on March 27. The Illinois baseball team lost their series to the Cornhuskers this weekend.

Each game in this weekend’s pod against Nebraska was a rubber match. The Illini opened this weekend’s pod play in a grudge match against the Cornhuskers on Friday. Illinois took the lead twice in late innings Friday night before eventually falling to the Huskers 8-6. The Illini came away with a 10-8 victory over the Huskers Saturday, before dropping Sunday’s game 12-7.

Nathan Lavender got the start on the mound Friday – his first start since April 30, 2019 when he pitched against Southern Illinois. The lefty showed no signs of rust, pitching the first four innings – allowing only one run and striking out a total of six batters.

Nebraska starter Cade Povich was torrid on the mound through the first six innings, but Ryan Hampe, Jacob Campbell and Justin Janas opened the game up at the bottom of the sixth; each dealing out their own RBI singles.

“I thought they did a good job on the mound,” Hartleb said. “Their pitcher came right at us and threw a lot of really quality strikes. When they would get guys on base, they were off to the races, and we didn’t control the running game very well.”

Between the sixth and seventh innings, the Illini accounted for six runs after going scoreless through the first six. However, the Illini lead was short lived as the Huskers came roaring back, scoring three runs in the seventh and three in the eighth.

The Illini run didn’t last long as they went scoreless over the remaining innings. Errors were the name of the game for the Illini as Campbell and the staff couldn’t connect all night – over half the errors committed were dropped pitches by Campbell.

Nebraska scored two runs off three hits in the top of the eighth to put the game away for good. Closer Spencer Schwellenbach went 3-for-5 on his first and final trip to the mound.

The Illini placed four different pitchers on the mound Saturday evening after Ty Rybarcyzk pitched the first 5.2 innings, but freshman Jack Crowder stole the show – throwing three strikeouts and allowing just one hit off of five batters in his one and a half innings pitched.

Illinois got some big offensive performances out of Janas and Cameron McDonald who led the evening with three-hit days. McDonald came through big for the Illini with three RBI’s. Janas and Hampe both scored three separate times.

One thing in particular put a smile on Hartleb’s face Saturday evening – capitalizing off of two out scenarios. The Illini put up multiple RBI’s in the face of two outs on the board. Janas and McDonald’s composure at the plate was huge in the Illini win.

Illinois built a 5-1 lead over the Huskers early in the third inning. A grand slam from Schwellenbach tied the game, followed by a solo homer from Cam Chick.

McDonald tied things back up with his third RBI of the evening, scoring Janas and placing Hampe on third. A single RBI by Brody Harding gave the Illini their second lead of the game and its third lead change.

However, the icing on the cake was a game winning two-run homer by Hampe, drilling the ball deep over the left field fence. Tied at eight a piece, the game winner came by way of veteran closer Max Schreiber, the first home run he’s allowed in 26 straight appearances.

“Big swing,” Hartleb said. “He had a rough day, swung at some pitches out of the zone. He just doesn’t let the last at bat bother him or affect him. He goes up and has a quality at bat each and every time – a big swing for him.”

Crowder recorded his first ever collegiate win Saturday night, shutting the door to Nebraska’s comeback in the eighth by stranding two runners. The righty came back out in the top of the ninth and struck out the final two hitters of the game.

The Illini came out swinging Sunday afternoon, building a 5-0 lead at the end of the fifth inning. However, seven straight runs by the Huskers in the sixth completely took the wind out of the Illini’s sails. The Illini tacked on only one run in the remaining three innings, opposed to Nebraska’s three.

Comia had two hits and three RBI’s in Sunday’s contest – including a double homer in the first inning. Leadoff hitter Taylor Jackson scored three times from the leadoff spot.

The story of Sunday’s game was once again the up and down pitching of the Illinois staff. Hartleb relieved a total of 10 pitchers in the three games – five pitchers went to the mound in games one and three of the series.

The team hasn’t held an above .500 record since their win over Michigan State in Ann Arbor on March 21. In an extremely stacked Big Ten conference, the Illini’s memory must remain short in order to attack each and every pod as their last.

“The Big Ten is good, it’s good top to bottom, Hartleb said. Each and every game is going to be a battle. We need to clean things up. We need to get better in some areas so we that can get ourselves back to .500, start working our way over.”

After two straight pods at home, the Illini (8-10) head to Bloomington to face Indiana (11-6) next weekend.