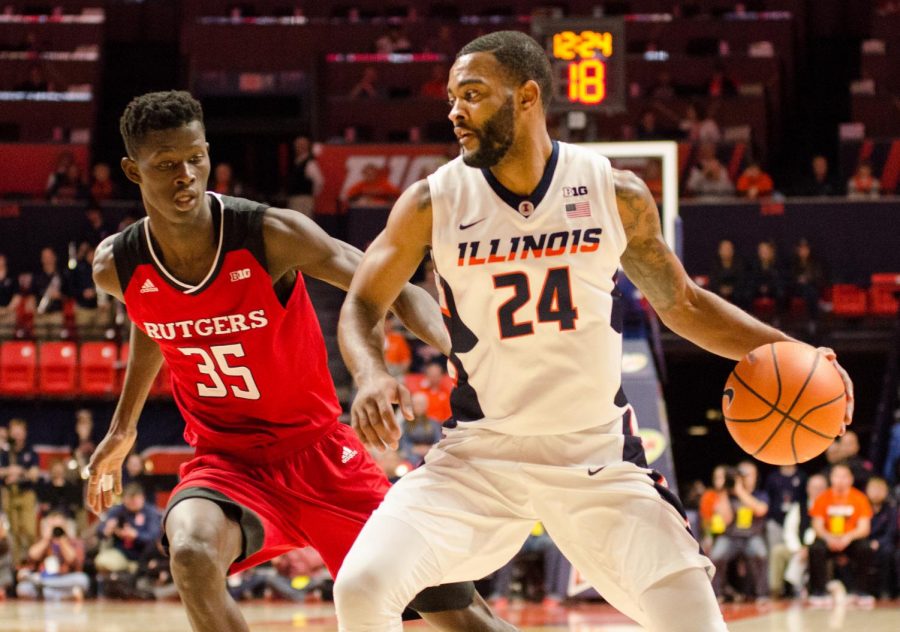 Mark Alstork makes a move to get by his defender in the Illini’s game agaisnt Rutgers. Alstork had a season high 19 points against Ohio State on Sunday.

Looking for its first road win against a ranked opponent in nearly four years, Illinois got off to a strong start against No. 17 Ohio State on Sunday.

Mark Alstork scored five of the Illlini’s first eight points and finished with 11 points in the first half. Michael Finke knocked down two 3-pointers as Illinois jumped out to a 30-15 lead with just over 10 minutes left in the period.

But the hot shooting didn’t last. The Illini were held without a point for the rest of the first half and gave up a 19-0 run to the Buckeyes to close out the first 20 minutes.

Illinois kept it close the rest of the way, but lost 75-67 at Value City Arena.

“That was a frustrating first half,” coach Brad Underwood said. “We do everything right. We move the ball, we share it, we’re playing together. And what happened is we make a few threes, and then we fall in love with it.”

The Illini made just four of 13 attempts from downtown in the first half and finished the game shooting 32.1 percent from behind the arc. Illinois was also outrebounded 45-22.

Ohio State improved to 20-5 on the season, but Kam Williams made it a lot harder than it had to be. Just hours before the game, the redshirt senior was suspended indefinitely for violating team rules. Williams has been one of the Buckeyes’ primary ball-handlers all year. Without him in the lineup, the Illini took full advantage early.

Illinois forced 10 turnovers in the first half. C.J. Jackson, who leads Ohio State with four assists per game, coughed it up four times. But before the Illini could stretch the lead any further, Kieta Bates-Diop took over. He scored 17 of his career-high 35 points in the first half. He also grabbed a game-high 13 rebounds.

“He’s going to be a first-round draft pick,” Underwood said. “He’s the MVP of the (Big Ten) in my opinion.”

Kipper Nichols and Leron Black both struggled against the Buckeyes. Both players were held to just nine points and fouled out late in the second half.

Trent Frazier scored in double figures for the 13th time in 14 games, but he made just five of his 15 shot attempts. He scored all of 12 of his points in the second half to keep the Illini in the game, but it wasn’t enough.

Tied at 63, with just under four minutes to go, Ohio State closed out the game on a 12-4 run to secure its 11th conference victory of the season.

“In the last minute you just have to be solid,” Underwood said. “I feel for our guys. We’re playing good enough to beat people, and yet we just completely (collapsed).”

Despite the poor outings from three of Illinois’ top scorers, one bright spot was Alstork. The graduate transfer had a season-high 19 points on 6-of-11 shooting.

Underwood commended Alstork for his decision-making on the offensive end and also for his ball pressure on defense. He picked up Ohio State’s guards full court and made things tough for them the entire game.

Illinois will return home to face Wisconsin on Thursday. The Illini lost by 25 points the last time these two teams met, but Underwood believes his squad has played lot better since then.

“We just gotta finish,” Underwood said. “I like the way we’re playing. We can beat anybody.”