Illinois heads to Minnesota in search of series sweep 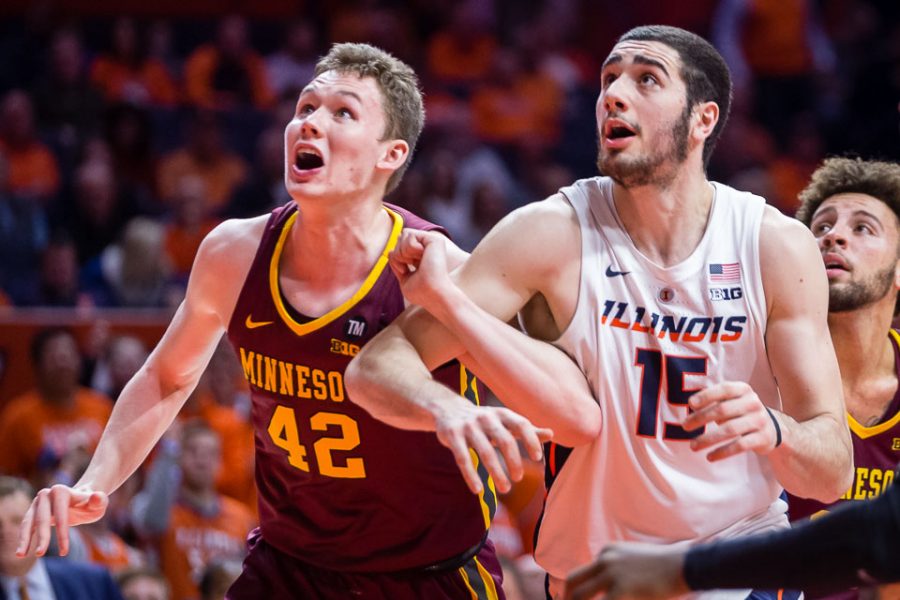 Illinois forward Giorgi Bezhanishvili (15) fights for position to rebound the ball during the game against Minnesota at State Farm Center on Wednesday, Jan. 16, 2019.

Illinois knows Minnesota has revenge on its mind.

It was a breakthrough win for an Illinois team that had its fair share of struggles throughout the season.

Even with the win over Minnesota and a 78-67 victory over No. 13 Maryland at Madison Square Garden over the weekend, the Illini have lost seven of their last games.

But Illinois has played the fourth-toughest schedule in the country, according to Kenpom, and the team feels the win over Maryland — the program’s first ranked win since beating No. 20 Iowa in the Big Ten Tournament in 2016 — was a major turning point.

“I think we’ve got it, we’ve gotten a lot better,” said sophomore guard Trent Frazier. “I like where we’re at. We’re going the right way and we’re starting to click.”

Following that performance, Illinois struggled to score against Wisconsin (now ranked No. 24) at home a week ago, losing by 12 despite a back-and-forth contest up until the last 10 minutes of the game.

“It’s about the every game, everyday mentality,” Underwood said. “We haven’t changed that. Yeah, I want them to feel confident because we beat a really good Maryland team. Now it’s the next step: the toughness, the aggressiveness to do it again. And to know that the way people look at you may change. We’ve got to respond to that.”

Frazier knows the Gophers are likely still angry over their loss at the State Farm Center.

Over the weekend, the team knocked off Iowa, 92-87, over the weekend on the back of 23 point performances from physical talents Jordan Murphy and Amir Coffey.

“I think all those guys are hungry to play us again,” Frazier said. “Just going there, playing in that hostile environment is going to be exciting for us and a big challenge for us.”

In the win over Minnesota, freshman guard Ayo Dosunmu limited Coffey to just nine points on 2-of-13 shooting.

Murphy scored 11 points, but only hauled in four rebounds, well short of his Big Ten-leading 12 rebounds per game.

Illinois also forced 15 turnovers, capitalizing by scoring 28 points off them against Minnesota.

Against Maryland over the weekend, Illinois forced 21 turnovers, including 15 in the second half. That mark was a season-high for Maryland, which hadn’t turned the ball over more than 20 times since its overtime win in Champaign on Dec. 3, 2017.

High-pressure defense, with an emphasis on turning teams over to disrupt rhythm and create opportunities in transition, has been a focal point of the Brad Underwood era at Illinois.

Frazier thinks that’s when the team is at its best.

“It shows when we do what (Underwood) wants us to do, that things work for us,” Frazier said. “When we’re in line and we’re playing defense and making them turn the ball over, we’re executing on both ends of the floor, we look incredible. I think that’s what we’ve done the last few games. Our record doesn’t show, but we’re working our butts off in that gym, man.”

Now, it’s time for the Illini to turn one big — and road — win into two.

“I think we can build off (the Maryland game),” Frazier said. “Every game, we just think about that moment in that locker room. Just think about how it’s going to feel after the game. Just putting another win in that column, it’s great for us.”