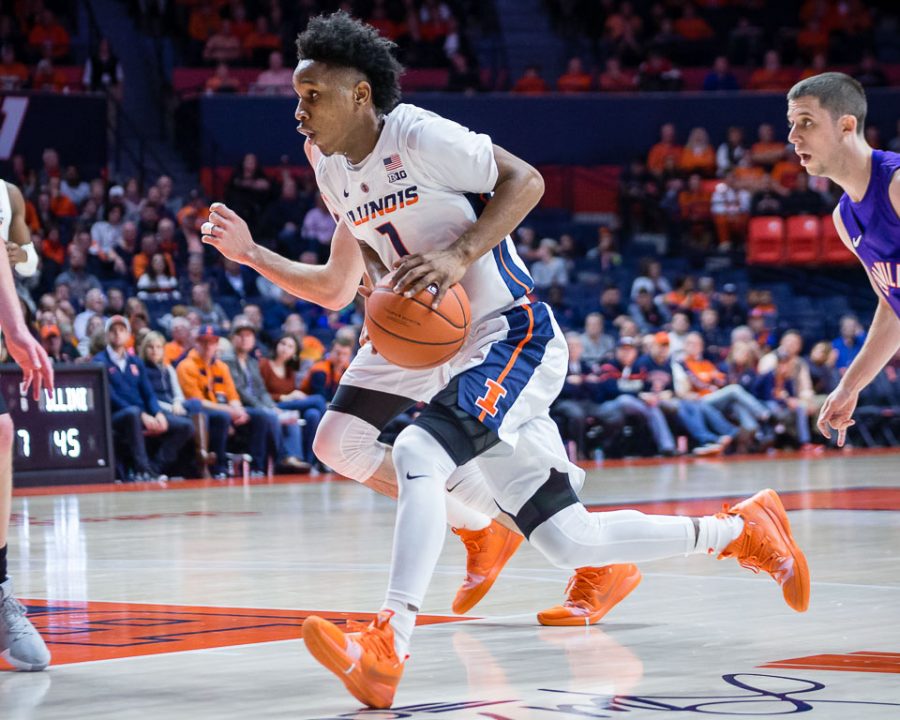 Illinois guard Trent Frazier (1) drives to the basket during the game against Evansville at State Farm Center on Thursday, Nov. 8, 2018.

Illinois had its way in the first bout with Minnesota, winning by 27 points in Champaign two weeks ago, but now on its home court, the Golden Gophers got their revenge on Wednesday night, pushing past the Illini 86-75.

The Illini (6-15, 2-8 Big Ten, 13th place) had an opportunity to convert a momentous win over No. 13 Maryland into two-straight Big Ten victories for just the second time in the Brad Underwood era, but they struggled defensively and couldn’t ride a 30-point outburst from sophomore guard Trent Frazier to victory.

While held mostly in check in the first matchup, Minnesota’s Amir Coffey and Jordan Murphy each had their way with Illinois.

Rebound machine Murphy added 16 (7-of-12 FG) while hauling in 10 rebounds for his 14th double-double of the year.

In the first meeting, Coffey was just 2-of-13 (1-of-3 3FG) for nine points and Murphy brought down a season-low three rebounds to go with 11 points.

The Illini struggled mightily to shoot the three — besides Frazier — going 2-of-15 from beyond the arc. Junior guard Andres Feliz hit his only three to date in Big Ten play to bring Illinois within four points with 12:02 to play, but it was all Minnesota from then on.

The Golden Gophers steadily pulled ahead, going on a 14-2 run over the next 3:45 to put the game out of reach.

Feliz contributed 11 points (going 3-of-4 FG, 1-of-2 3FG) and brought down four rebounds, but he and freshman Tevian Jones (10 points) were unable to match the scoring of the Gophers’ clicking offense.

Freshman forward Giorgi Bezhanishvili scored nine points on an efficient 4-of-6 shooting mark but was picked on inside by an effective Minnesota front line that helped score 38 points in the paint and only brought down two rebounds in 27 minutes.

It was the second-straight game the Georgian product didn’t reach double figures in scoring after he had done so in five of the previous six.

Graduate transfer Adonis De La Rosa didn’t fare much better on defense (despite drawing a first half charge) and Minnesota finished the game shooting 50 percent, compared to a 44.8 percent mark for Illinois.

Illinois Mr. Basketball winner Ayo Dosunmu led Illinois with six rebounds and four assists, but like many of his teammates, struggled to score the ball. The freshman guard went 3-of-9 (0-of-3 3FG) from the field after putting up 20 in Illinois’ 78-67 win over Maryland over the weekend.

At the half, it looked as if Illinois was in for a tossup.

Frazier pulled up and nailed a three-pointer in the frame’s final seconds, giving the Illini a 39-37 lead.

At one point, Frazier had scored 12-straight points for Illinois and at the under-16:00 timeout, he’d scored 14 of the team’s last 16 points.

After a breakout game at Madison Square Garden and a season-high 23 minutes, Jones went 3-of-9 (0-of-3 3FG) from the field, though he brought down three rebounds and added two steals with no turnovers.

Redshirt-junior Kipper Nichols continued to see his playing time whittled down, failing to score in the fifth-straight game, playing just four minutes against Minnesota with two rebounds and a block.

Illinois heads home with a home matchup on Saturday at 1:15 p.m. against a floundering Nebraska side that has lost four-straight games and recently lost senior forward Isaac Copeland Jr. for the season due to a torn ACL.