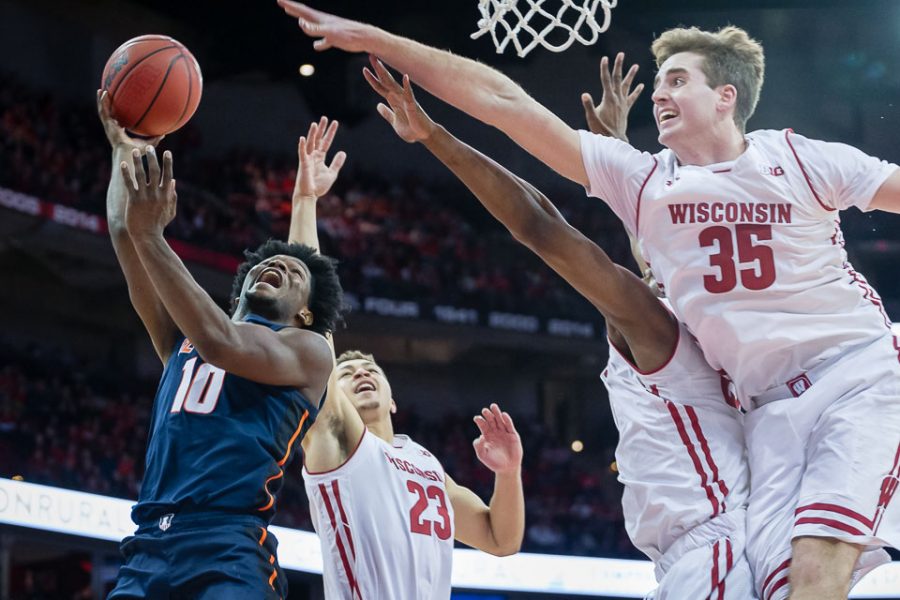 Illinois guard Andres Feliz attempts to put up a layup during the game against Wisconsin at the Kohl Center in Madison, Wisconsin, on Monday. The Illini lost 58-64, snapping the team’s longest win streak in the Brad Underwood era.

Illinois came into Madison, Wisconsin, red hot on the back of four-straight conference wins and got off to a promising 10-2 lead against No. 22 Wisconsin on Monday night.

Two three’s from senior Aaron Jordan, to go along with the Badgers missing seven of their first eight shots, gave the Illini early momentum.

Neither team shot well, with Illinois leading 26-25 at the break. But the Badgers took the lead for the first time on a D’Mitrik Trice three in the opening 15 seconds of the second half and edged out the Illini over the course of a gritty contest for a 64-58 victory.

With a win, the Illini would have extended the longest winning stretch in the Big Ten for head coach Brad Underwood (from four to five games) and would have matched the program’s February 2013 run of five-straight conference wins.

Illinois has now lost to Wisconsin a program-record 15-straight times, with its last win coming during the Bruce Weber era, in January 2011 in Champaign.

After forcing Ohio State into 18 turnovers the last time out, Illinois was only able to turn Wisconsin over 12 times, scoring just five points off turnovers.

Wisconsin, on the other hand, turned Illinois over just one more time (13) but scored 17 points off those turnovers.

The Badgers also were able to score on some crucial second-chance opportunities, scoring 15 second-chance points to the Illini’s six and won the rebounding battle, 40-33.

One such moment came with just 27 seconds left, as Wisconsin had the ball, up two points after two made Ayo Dosunmu free throws, and Wisconsin forward Nate Reuvers converted at the basket after snagging a rebound from Brevin Pritzl’s three-point miss.

Illinois wasted nearly 10 seconds moving the ball up the floor and the called a timeout. Wisconsin guard Khalil Iverson then managed to steal the ensuing inbound pass from Dosunmu.

Even as the Badgers missed two of four remaining free throw attempts, the Illini were unable to come up with the big time shots needed (37.5 percent FG, 31.6 percent 3FG) to pull out a win over the No. 22 ranked team in the country.

Wisconsin was carried largely by the production of guards Brad Davison and Iverson, who scored 18 and 16 points, respectively.

Davison went 5-of-10 (2-of-6 3FG) from the floor while adding seven rebounds. He also dished out three assists and had two steals.

Iverson went 5-of-8 from the field, adding nine rebounds, including five on the offensive glass, with two steals and a block.

Each player had success in the teams’ first meeting, with Iverson scoring 12 and Davison adding 10 in a 72-60 for Wisconsin on Jan. 23.

Underwood credited his team’s efforts in the postgame while lauding the pair of Wisconsin guards.

“I think Iverson likes seeing orange and blue. He’s played great in all four games that we’ve faced them now,” Underwood said. “He was very, very tough. Brad (Davison) hit some tough shots for them down the stretch.”

For the second-straight game, Illinois held star forward Ethan Happ at bay, as the redshirt-senior only scored six points on 3-of-6 shooting, added three rebounds and turned the ball over three times.

In the game in Champaign, Happ was held to nine points and nine rebounds while turning the ball over six times.

Illinois guards Trent Frazier and Dosunmu struggled to shoulder the Illini’s scoring load, combining to shoot 7-of-25 from the field (3-of-13 3FG).

Dosunmu put up a team-high 13 points but did so on 4-of-15 (1-of-7 3FG) shooting to go along with three assists, two rebounds and two turnovers.

Frazier had a knee injury scare that kept him off the court for a few minutes early in the second half but was able to return. He shot 3-of-10 (2-of-6 3FG), adding two rebounds, two assists and two turnovers.

Underwood wasn’t overly concerned with the play of either of his guards, who each failed to score in double-figures in the first meeting with Wisconsin as well (nine points for Frazier, eight for Dosunmu).

“Just one of those nights,” Underwood said. “(Wisconsin is) really good. They’re a team that’s experienced and they’re good players; they make things difficult. They put Iverson on Ayo. He wasn’t just very good on the offensive end and the glass; he was very good on the defensive end. That’s a big, strong body and a really good athlete.”