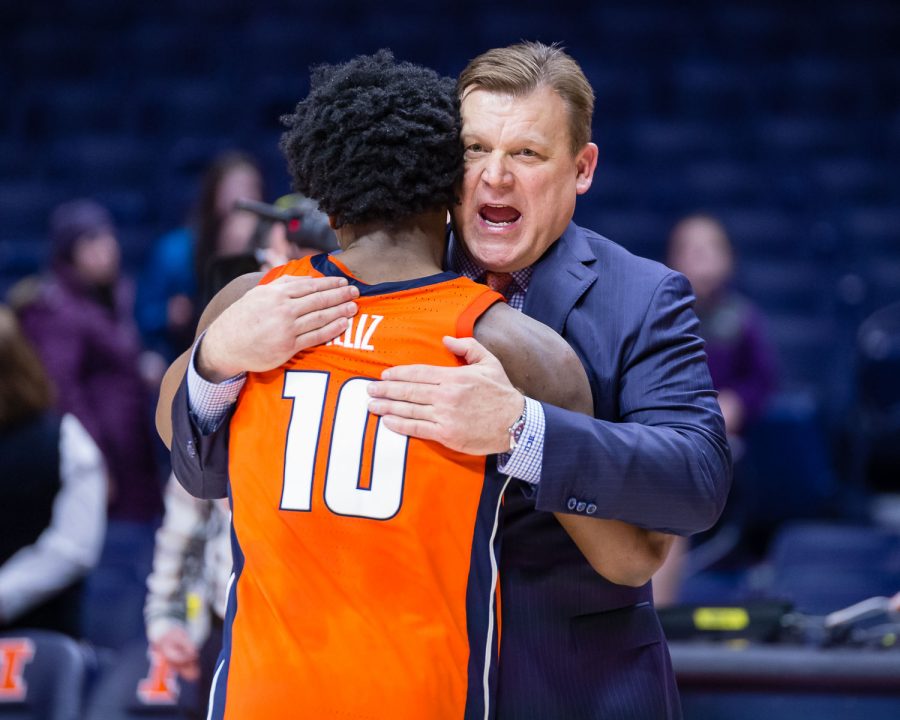 A sparsely filled State Farm Center did not get loud often Sunday evening but when it did, the noise was headed in the direction of Andres Feliz.

The former junior college guard put up his best performance in an Illini uniform against the Wildcats, knocking down a flashy 26 points with five boards and three assists to lead the Illini to an 81-76 victory and the team’s 7th Big Ten victory.

“I was being aggressive and my teammates were able to find me, get in the paint, find me in transition, stuff like that,” Feliz said following the game.

When Illinois met Northwestern earlier this season for a battle at Welsh-Ryan Arena, the Wildcats edged out a close 68-66 victory. However, Feliz was nearly nonexistent in that matchup two months ago, only knotting two points on the night.

The first-year player may not have started the game as he did the previous but it did not take long for him to make his impact off the bench.

“He is a great player. When he comes off the bench, it is really hard for the defenders because most of their starters are coming out of the game and he is coming out fresh,” said freshman guard Ayo Dosunmu.

Trent Frazier got the ball rolling for the Illini — literally. The sophomore chucked up a three that hit the back of the rim and rolled in for the team’s first points of the game.

From there, the Illini’s success from behind the arc only improved. Frazier, Dosunmu and Giorgi Bezhanishvili went on to score the first eight points to give Illinois the early advantage.

Feliz quickly got in on the offensive-burst, scoring in transition for an and-one basket followed by a second driving layup.

“I basically look at where their bigs at. If he is behind then I’ll see an open space, and if I see that I can attack that, I’ll just take it,” Feliz said.

The former No.1 ranked junior college point guard tallied a team-high 11 points and three assists in the first half, one of which came on a steal and then toss up the court to Alan Griffin in transition for the dunk.

Feliz made the Northwestern defense miss multiple times in the half, driving in and showcasing some impressive speed and dribble moves to knock down multiple high-arcing layups.

Northwestern failed to counter Illinois’ offensive attack, bricking most shots off the back of the rim and going just 1-13 from three-point range during the half, and the Illini walked into the locker room with a 39-27 lead.

“In the first half, they got separation from our inability to make shots,” said Northwestern head coach Chris Collins. “It allowed them to get in transition and do what they do best.”

In the second half, Feliz picked up where he left off. After the Wildcats opened with a comeback effort that brought the team within six points, Feliz checked into the game and drew a foul to head to the free throw line and knock down two.

However, the Wildcats would not back off. Lead by guard Ryan Taylor and small forward Vic Law, the Wildcats knocked down four 3-pointers to get right back in the game and make the score 46-43.

The next four minutes were back-and-forth basketball.

Illinois pushed the game back up to double-digits only to have Northwestern bring the lead back down to six in nearly 30 seconds.

The Illini then found themselves back up 11 only a couple minutes later thanks to a Dosunmu 3-pointer and a Kipper Nichols and-one layup.

The Wildcats would once again climb back to six points capped off by a Miller Kopp dunk, but Feliz acted as the momentum killer once again. Two free throws and a tough transition layup would give him his career-tying 19th point of the game and extend the Illini lead.

“Dre came in and we knew there (were) creases. We had four easy baskets in the game there where we just did a speed dribble-dribble down the court. We put a little heat on them,” said head coach Brad Underwood. “Dre’s as good as it as anybody, puts a lot of foul problems on people and foul pressure.”

Illinois was finally able to maintain its lead for a considerable amount of time. But the last chance effort from Northwestern and a big three from Miller Kopp brought the Wildcats within five with 42.3 seconds left.

Feliz went to the free throw after an intentional foul and knocked down one, and a stroke of luck would follow for the Wildcats on the other end. Kopp chucked up a three from the corner and drew the questionable foul call.

After knocking down all three free throws, the Wildcats stood on the court down only 77-74.

“We jumped on them early and they did what a good Big Ten basketball team does: fight back,” Underwood said.

No other than Feliz was sent to the line and this time hit both shots to give the Illini some breathing room.

The Illini’s ability to get to the free throw line acted as the team’s saving grace. The team went a whopping 33-38 from the charity stripe to the Wildcats 17-22.

Feliz only completed five field goals and headed for the line to gather the rest of his point, going 16-17, greatly helping add points to his career-night.

“I’m very proud of that, and I think the one thing that goes unnoticed is that Dre put 11 fouls on their team. That’s a huge number,” Underwood said.

Up next, Illinois will battle Indiana on Thursday for the team’s second to last regular season game.

“It’s March now, so we are really playing like this is our last game,” Dosunmu said. “We really don’t have anything to lose at this point. We just want to come out and play as hard as we can. Some teams make runs.”