Illinois football’s Turner returns to the field after major scare 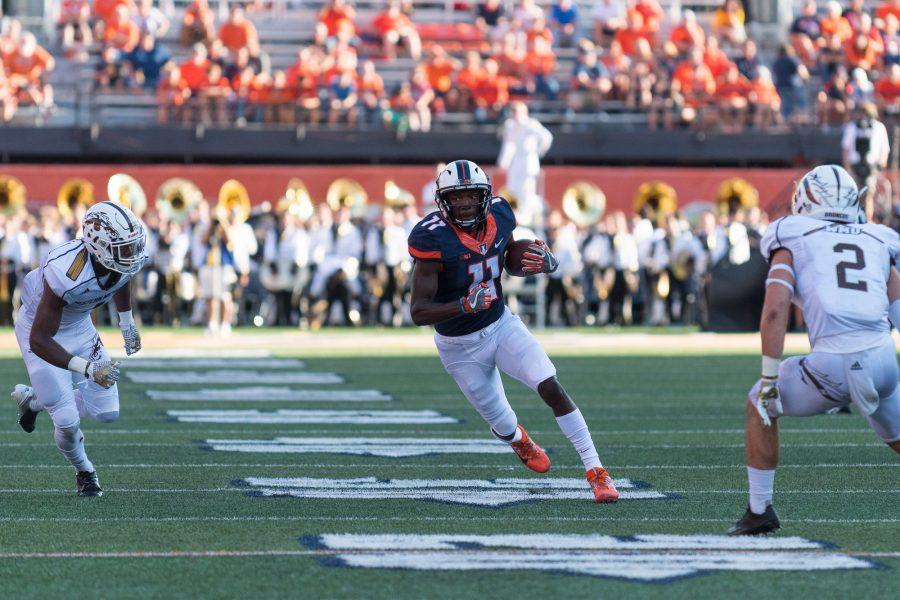 Illinois wide receiver Malik Turner weaves through defenders during the game against Western Michigan at Memorial Stadium on Saturday, September 17. The Illini lost 34-10.

The entire crowd fell silent when wide receiver Malik Turner went down after a helmet-to-helmet collision in the first half of Illinois football’s Homecoming game.

He didn’t move for almost 10 minutes, and he was carted off the field past teammates and fans who were fearing the worst.

And they were not the only ones.

“I thought I was never going to get to play the game of football anymore,” Turner said.

He was taken to the hospital immediately after the paramedics took him off the field. Doctors started to run tests on him, and Turner couldn’t shake the fear that his career might be over as he underwent examination.

Three weeks later, Turner returned to the field in the game against Wisconsin. The return itself was low key. He made one catch for 12 yards, but it was a big moment for him.

“I wasn’t really nervous,” Turner said. “Once I started playing and got those first couple plays in that first possession, I was feeling good.”

And it was a big moment for the Illini program.

The Illini had players step up in Turner’s absence, and though they won against the Spartans, they did not replicate the numbers that Turner was putting up.

“I think Malik has the natural God-given abilities to make him one of the best players for sure in our conference,” offensive coordinator Garrick McGee said.

Head coach Lovie Smith has been talking about the future since he was hired, and Turner, a junior, is a big part of that future.

He was always going to be the guy on Illinois’ receiving corp. After Desmond Cain and Mike Dudek went down with injuries, Turner was the only one left with real experience with quarterback Wes Lunt.

In Turner’s time in the spotlight this season, McGee has noticed him reach new levels in his game as a leader.

McGee knows that being humble is important, and he does not want him to lose that. He has had humble players before, and he always encourages them to carry themselves to their level of talent.

“The really humble kids just go out and play ball and do what they are supposed to do,” McGee said. “They don’t really see themselves as elite players, and it is a good trait. But as you grow up in your career and your team needs more from you, that you really grow up and see yourself for who you really are. Then you have to practice like that, you have to play like that and you have to give your team confidence.”

The Wisconsin loss and the last two games of the season will be big for Turner as he builds confidence for next season.

For Turner, his minutes spent pondering the end of his career are already in the past. And the future isn’t on his mind either.

Instead, it’s on the present. After that hit, he knows it can end at any time.

“I thank God that he has allowed me the opportunity to play with my family and my brothers,” Turner said. “I am just very thankful.”