Dudek ready to forget about knee injury, excited to be back 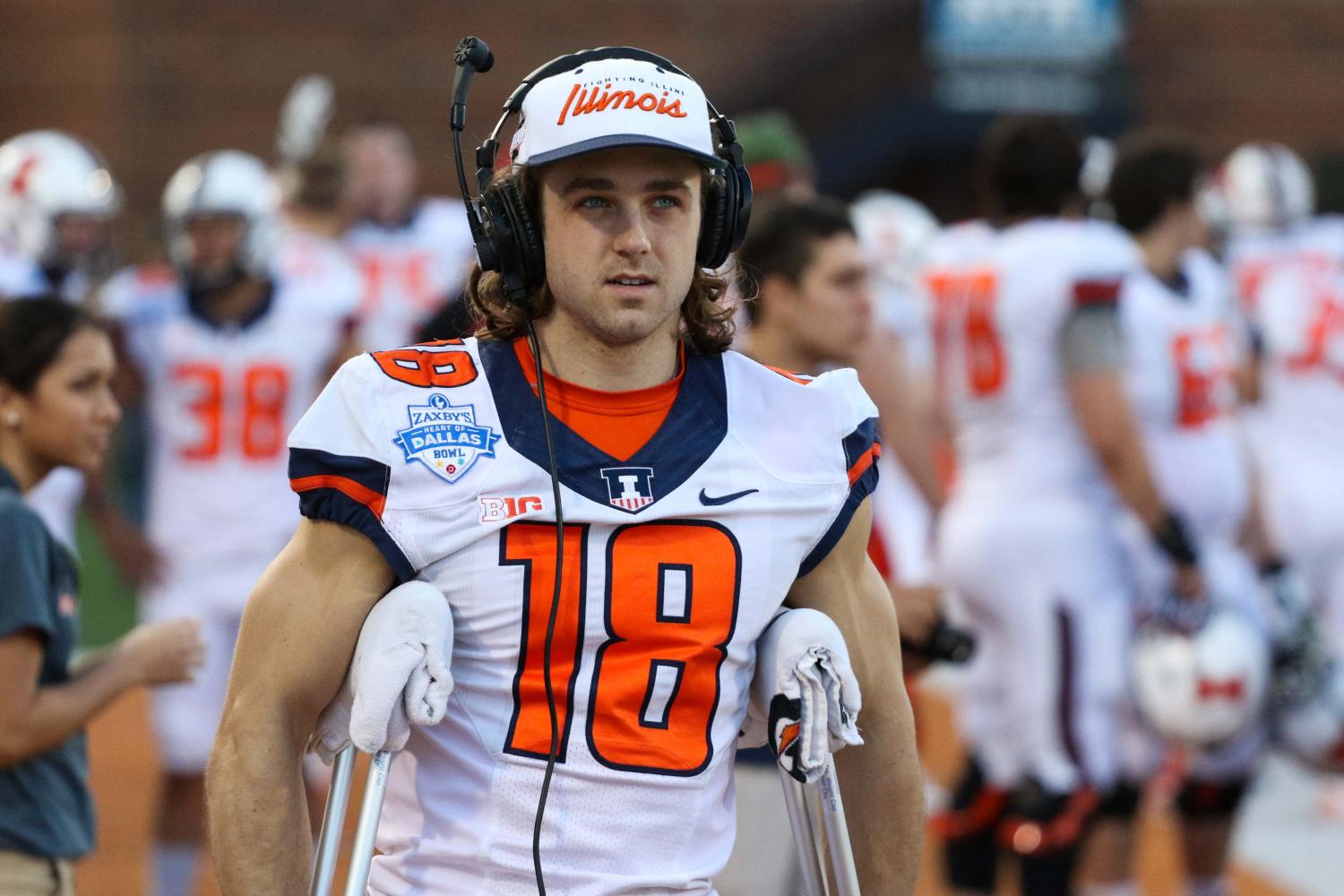 Mike Dudek is tired of hearing the same question over and over again—a question family, friends and fans have asked him over the past two years.

He doesn’t want to answer it anymore. He envisions a button anyone can push to hear his own automated voice answering the question to help his case.

In April 2015, Dudek suffered an ACL injury that sidelined him for the entire 2015 season.

After rehabbing and working his way back onto the field, Dudek re-tore his ACL in a 2016 spring practice. Head coach Lovie Smith said that “sometimes the game can be cruel” when he heard the diagnosis last spring.

Smith indicated at the beginning of the 2016 season that there was a chance Dudek could return toward the end of the season, but it never came to fruition.

The future looked bright for Dudek after he turned in a breakout freshman campaign. He hauled in 76 receptions for 1,038 yards and six touchdowns. He also recorded 73 yards on the ground.

Dudek’s season helped propel Illinois to its most recent bowl appearance. The Illini lost 35-18 to Louisiana Tech in the Heart of Dallas Bowl.

But the wide receiver had no idea he would be held out of a college football game for another two years after the bowl loss.

He said it will be nice to simply get on the field and forget about his past absence from his teammates and coaches.

“I’m just going to go out and have as much fun as I can,” Dudek said. “Obviously, I want to take it serious and win games but try not to stress myself out too much, just do what I can to help make plays and help the team win.”

Senior wide receiver Malik Turner and Dudek were recruited in the same class and played as true freshmen in the 2014 season.

Turner said that he is confident that Dudek can return to the same level of play he showed his freshmen year and build on that moving forward.

“Mikey’s come a long way,” Turner said. “He’s a different type of receiver than myself. I know he’s excited to get back out there, and I think he can do some big things for us this year.”

Smith echoed Turner’s words, saying that he could not fathom the agony he experienced while watching his teammates from the sidelines.

The head coach commended Dudek’s patience and said he is fully healthy heading into Saturday’s matchup against Ball State.

“Think about having to sit and watch two years (from the bench),” Smith said. “I couldn’t be happier for anybody else on the team more so than Mike to have an opportunity to play.”

Both of Dudek’s parents will be in attendance this weekend. He said that his mom is the one worried about seeing him back out on the field while his dad has remained calm throughout the process of his return.

Offensive coordinator Garrick McGee said he’s most excited for the junior and his parents to see him get another opportunity to play the sport he loves.

Even with much anticipation for his first game back, Dudek is not concerned about what the box score says next to his name at the game’s conclusion. He just wants get away from any questions about his knee and simply perform on the field.

“I’m not setting any statistical goals for myself,” Dudek said. “Really after everything that’s happened, I have a whole new outlook on not only football but life in general.”