Attack-minded Western Kentucky to take on Illinois this weekend 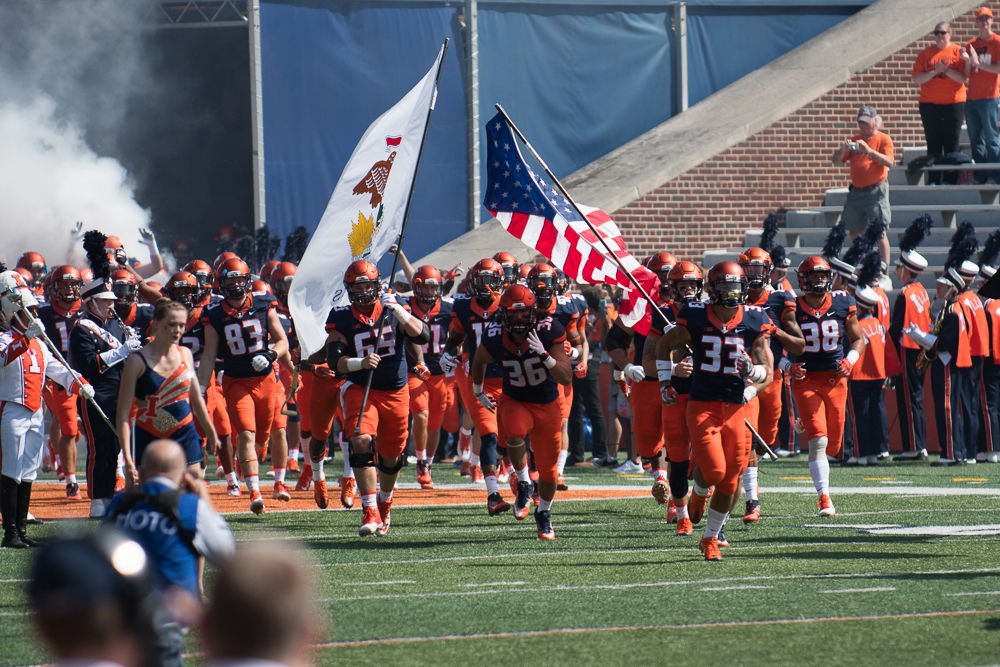 Illinois enters the field at the start of the game against Ball State on Saturday, Sep. 2.

The Hilltoppers put up 50 points or more in seven games last season, including a 60-6 stomping of Marshall in its own stadium.

Western Kentucky put up fewer than 30 points one time last season and that was in a 38-10 defeat against national champion Alabama.

The team put their offensive prowess on display in the Boca Raton Bowl, beating Memphis 51-31 for its third-straight bowl victory.

Western Kentucky won its first game of the 2017 season last weekend 31-17 and claimed the Battle of the Bluegrass title after defeating in-state rival Eastern Kentucky.

Illinois will face the high-scoring offense this weekend under the lights at Memorial Stadium.

The Illini enter the contest with a 1-0 record after defeating Ball State, 24-21.

Illinois head coach Lovie Smith said he understands how potent the Hilltoppers’ offense can be.

“I saw a team with a lot of confidence,” Smith said after looking over Western Kentucky’s film. “You should have that when you win your last bowl game and when you win as many games as they won last year.”

Western Kentucky quarterback Mike White threw for over 4,363 yards and 37 touchdowns last season. He completed 20 passes for 264 yards and a touchdown last weekend against Eastern Kentucky.

The Hilltoppers’ running game is split between Marquez Trigg and D’Andre Ferby. Trigg received 16 carries last weekend, while Ferby got 19. The two combined for 100 rushing yards and three touchdowns on the day.

Illinois linebacker Tre Watson said he understands that the Illini defense can’t make the same mistakes they committed against Ball State if they want to walk away with a victory this weekend.

“We know (Western) has a quarterback who likes to throw the ball,” Watson said. “If they feel like Ball State exploited us, which I think they did, then they will look to do that even moreso. So we’ll have to correct those things and be prepared for even more tricks coming from them.”

Jeff Brohm, Western Kentucky’s head coach for the past three seasons, took over the same position at Purdue after last season.

Brohm finished his time at the school with a 30-10 record and three bowl appearances — all of which the Hilltoppers won.

His team was 10-3 heading into the Boca Raton Bowl last season, but Brohm was not present for the game due to his accepting of the Purdue head coaching position.

Brohm and Purdue lost to No. 16 Louisville by one possession last weekend.

Former Notre Dame offensive coordinator Mike Sanford took over for Brohm in the offseason. Sanford was the quarterbacks coach for the Hilltoppers in 2010.

This is the second time Illinois will face Western Kentucky. The Illini were down six late in the fourth quarter and stormed back to win 42-34 in their 2014 matchup with the Hilltoppers.

But this weekend, quarterback Chayce Crouch said he is looking for execution.

“It feels good to win (last week’s) game and come into this week with some momentum,” Crouch said. “To have that extra motivation to watch the film from Week 1 and be like, ‘Look, there’s a big play here we could have had.’ Knowing there are a lot more touchdowns left on the table, that feels good heading into Week 2.”