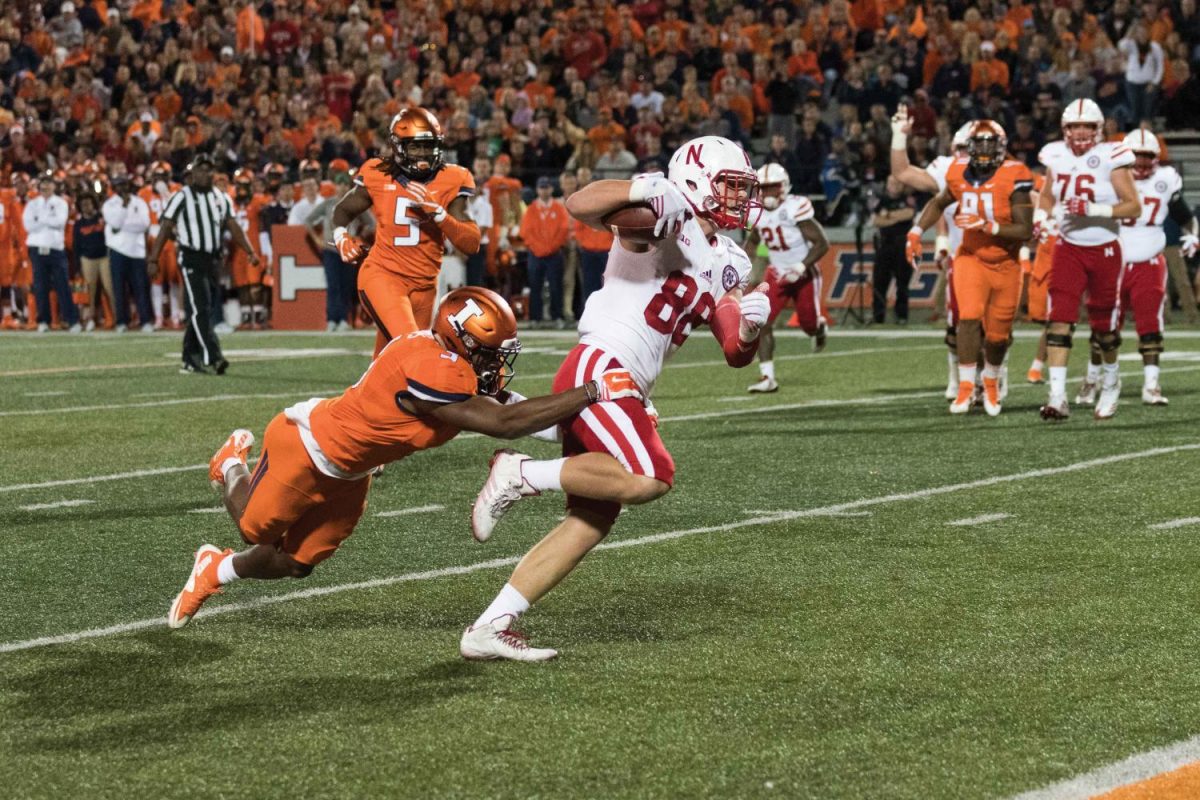 James Crawford, Carmoni Green and Reggie Corbin all made their 2017 season debuts Friday night against Nebraska.

The three said they were happy to be back out on the field but were disappointed their performances could not help the team notch its third win of the season.

Any idea of Green being red-shirted was scrapped when the freshman wide receiver took his first snap as an Illini in the first quarter.

His first catch came on a quick-hitter from quarterback Chayce Crouch. Green caught it in the flat, made a move to the outside and picked up 18 yards.

It was the only catch of the night for Green, but he said he is looking forward to learning more from his teammates to make him a better player.

Crawford, who started at defensive end, saw his first game action of 2017, recording five tackles, two for a loss and a sack. The senior was held out of the first three games for an undisclosed reason.

Crawford said he was blessed to get another opportunity to see the field before he graduates. He was more focused on the loss rather than his personal performance after the game.

“With a loss, I can’t say my performance was good enough,” Crawford said. “The seniors have to step up, but to win, everybody has to come together.”

Running back Reggie Corbin also saw his first playing time of the season. The sophomore rushed four times for nine yards. His biggest play came on a run up the middle for seven yards.

Corbin said he needs to make improvements in his game if he wants to help the Illini win moving forward.

“I think I need to make a lot more big plays, regardless of what happens,” Corbin said. “I need to control my play, and that’s why I’m upset with myself. Everybody thinks we should have won that game, and we beat ourselves.”

Head coach Lovie Smith indicated that no one out of the three players making their season debuts performed great. He said instead that the trio performed how the typical players would begin their seasons.

“I guess you can say (Crawford, Corbin and Green) played about how you would play your first time out,” Smith said. “You expected a little more out of Crawford than we did tonight, but again, it’s his first time back.”

He also said that he did not see a single great performance from any Illinois player on Friday night. The Illini lost 28-6 to the Huskers, dropping them to 2-2 and 0-1 in the Big Ten.

Smith believes the team needs to take a better approach into its game against Iowa next Saturday.

“Can’t talk about anyone playing well,” Smith said. “We need a better game plan, and we need to play better. Simple as that.”