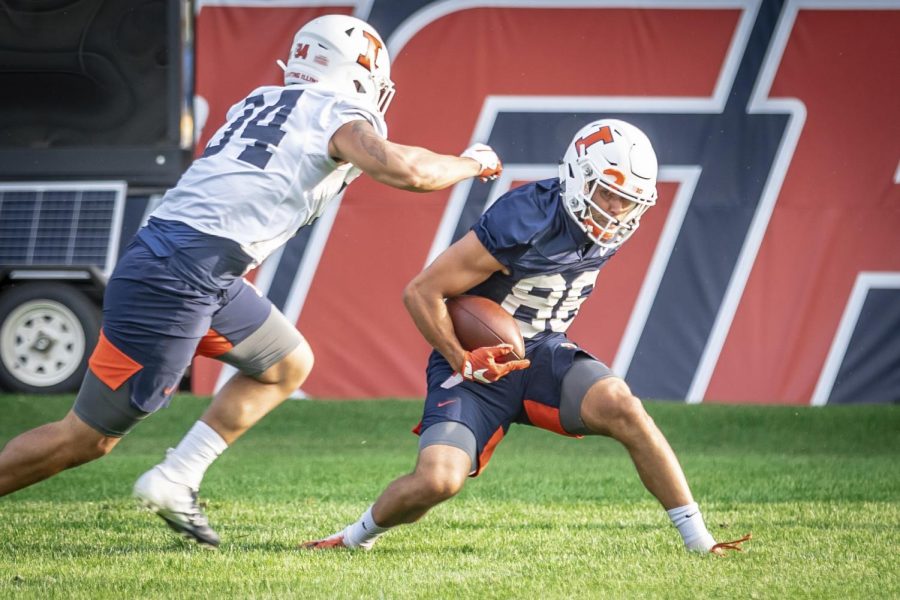 Junior Donny Navarro slips around a defender during football practice on Sept. 17. The Illini are scheduled to have their first home game of an abbreviated 2020 season on Halloween against Purdue.

A clean-shaven Lovie Smith and his football team are back, and hopefully for good this time. After weeks of being told a season would have to wait until the spring, Big Ten presidents came together and decided to bring back a fall season, giving their programs a shot to compete for college football’s top prize. Here’s a breakdown of Illinois’ revised 8-game schedule.

Illinois opens up the year on the road against the Wisconsin Badgers, who the Illini stunned last year 24-23 on a last-second field goal. While the 31-point favored Badgers were caught off guard, they won’t be this year. Wisconsin, who start the season ranked No. 12, comes back with one of the best defenses in the country. If Illinois wants to pull off another upset, senior quarterback Brandon Peters and his wide receivers need to be in sync early.

After Wisconsin, Illinois returns to Champaign to host Purdue and Minnesota, respectively. Illinois stuffed Purdue on the road last year 24-6, and the Boilermakers are set to take another step back with the unexpected loss of wide receiver Rondale Moore. Minnesota, on the other hand, is stacked with a seasoned quarterback, redshirt junior Tanner Morgan, and a handful of wide receivers. Minnesota head coach PJ Fleck appears to have his Golden Gophers rowing the boat.

Illinois then heads out to Piscataway, New Jersey, to take on their annual East Division opponent: Rutgers. For the fifth consecutive year, the Illini take on the Scarlet Knights, which appears to be the easiest game on their schedule. Rutgers, who finished 1-11 last season, rehired Greg Schiano, the winningest coach in program history. Schiano is inheriting a depleted squad, though, and Illinois should be able to overpower Rutgers with sheer talent.

After Rutgers, the Illini will travel to Lincoln, Nebraska, to take on the Cornhuskers. Head coach Scott Frost has struggled mightily at his alma mater, going 9-15 in his first two seasons. Although his seat is not boiling hot, Frost desperately needs to show athletic director Bill Moos and the passionate fan base he is the man for the job.

Despite Nebraska’s shortcomings, they have had Illinois’ number recently, winning four in a row against Smith. Senior linebacker Jake Hansen and the defense are going to have to contain Nebraska’s quarterback, junior Adrian Martinez, much better if they want to avenge the 42-38 loss last season.

Waiting for the Illini in Champaign after the two-game road trip are the Ohio State Buckeyes, the three-time defending Big Ten champions and national title favorite. Last season, Ohio State won every Big Ten game by double digits, and this season shouldn’t be any different with junior quarterback Justin Fields anchoring an explosive and diverse offensive attack. If Smith wants to pull off the heist of the century, he may need a little Juice Williams magic from Peters.

If the Illini are still in one piece after a visit from their Illibuck rival, Smith and company play host to the Iowa Hawkeyes. Although the Hawkeyes get the benefit of the doubt, they have lost talent from last season, including three-year starting quarterback Nate Stanley. Last year, Illinois had Iowa on the ropes before a couple of late turnovers, losing 19-10 to the Hawkeyes. This appears to be a winnable statement game for Smith’s program if Peters can bring his A-game.

The Illini finish up the regular season with in-state rival Northwestern on the road. Smith has been dominated by the Wildcats during his tenure, going 0-4. Last season, despite coming into the game 2-9, the Wildcats handled a bowl-bound Smith squad, 29-10, amassing over 300 rushing yards. In Illinois’ defense, Peters, Hansen and senior star wide receiver Josh Imatorbhebhe were out for the game; however, the effort was questionable as Smith treated it like a Week 17 game in the NFL. Although Illinois has more talent than its Evanston counterparts, expect head coach Pat Fitzgerald to have his boys ready.

Finally, unless Illinois wins the West and plays in the Big Ten championship, the Illini will play a consolation game against an East division opponent. So if the Illini finish sixth in the division, they will face the East’s sixth place team, unless it results in a rematch. Likely opponents for Smith’s squad include Michigan State, Indiana, Maryland or maybe even Michigan if Illinois turns in a good season.

Although this isn’t what the Illini expected, football will be played this fall. Before coronavirus, Illinois was looking at a cake schedule with Illinois State, Unversity of Connecticut and Bowling Green in the non-conference games. However, the pandemic had different things in mind, and now the Illini have eight conference games with no easy breaks — OK maybe Rutgers. Still, this is still Smith’s most talented team yet and the program’s since 2008. If Peters can stay consistent and the defense can continue to force turnovers, the Illini faithful can expect a fun and overachieving season.