Illini of the Week: Fletcher steps up for injury-riddled team 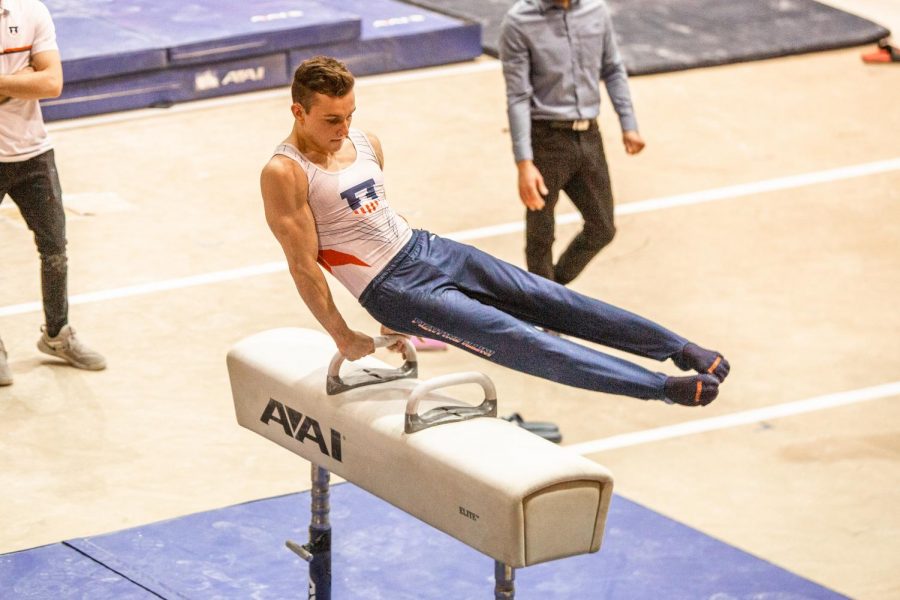 Michael Fletcher swings himself over the pommel horse at a meet against Ohio State on Jan. 23. Fletcher stepped up against Minnesota this weekend and received the Illini of the Week award for competing all-around seamlessly while most of the team’s top performers were injured.

In its regular season finale against Minnesota, the Illinois men’s gymnastics team needed every healthy gymnast to compete, including its walk-ons. The team was, and still is, ravaged by injuries and setbacks, with many of its best gymnasts unable to compete.
“We have 70% of our starting routines out, and they’re not coming back,” said head coach Justin Spring. “Never in my 12-year (coaching) career have I had that many routines out. It just so happens that the injuries we’ve had are on our best all-arounders, and it’s costing us so much.”
Enter Michael Fletcher.
Fletcher was one of the few Illinois all-arounders available for the Minnesota meet, as he played a big role against the Golden Gophers. In a meet where 30 routines per team were scored, Fletcher contributed 20% of the Illini’s team score.
“No one else is going to have that contribution capability on our team,” Spring said. “He’s an essential part of the picture. He’s a really unique all-arounder. It’s very rare to have someone who can be super strong on every event, and that’s what makes him so critical. He’s in the lineup on every event, and he would be even if we were at full strength.”
With top all-arounder Hamish Carter unavailable and top rings gymnast Danny Graham coming off a three-week COVID-19 quarantine, Spring relied on Fletcher to pick up the slack in these areas against Minnesota.
That’s exactly what Fletcher did.
Fletcher was the highest-scoring Illini on high bar, still rings and all-around, winning titles in the latter two events. His still rings score of 14.000 was a career high, which earned him his first career still rings title.
“That was the first time I did my new routine,” Fletcher said of his still rings performance. “That routine has been clicking really well in the gym, and I was really excited to compete. It went really well, which I was really happy about.”
Fletcher was also happy to take home his first all-around title since his freshman year. After redshirting his sophomore year due to injury and spending much of the season trailing Carter and opposing all-arounders, the Minnesota meet was his chance to step out of the shadows. He scored a 79.000 in the all-around competition for the title, though it’s not a score Fletcher would hope for in the future.
“I think I have the capability of scoring much higher than I did, so part of me was a little frustrated with that,” Fletcher said, “But at the end of the day, coming out of with an all-around title, I can’t be too upset about it. I’ll take it.”
Fletcher also came in clutch as the anchor on both high bar and parallel bars. His teammates did not put up the best possible scores on high bar, and on parallel bars, Fletcher was the last Illini to perform. He did so in a situation that called for him to hit his parallel bars routine to win the meet.
Though neither Spring nor Fletcher described the performances as perfect, Fletcher had good routines and stuck his landings to deliver a team-high 13.050 on high bar and a 13.000 on parallel bars. The Illini edged out the Golden Gophers by a point to win 393.800-392.800.
“He was able to do that in one of those clutch positions that he’s struggled with in the past,” Spring said. “He hit routines in those critical moments. That’s what you want, and that’s all you can ask for.”