Illinois women’s basketball’s Holesinska is no stranger to distance 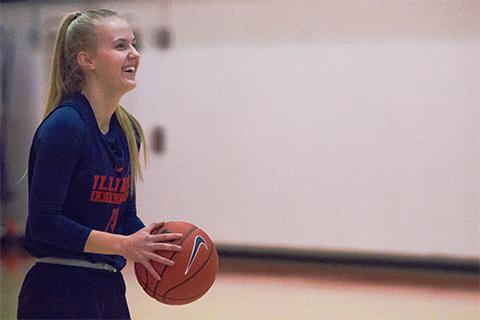 A portrait of Petra Holesinska.

Shorts tucked and with her hair braided back into two pigtails, Petra Holesinska warms up for her game against Penn State.

She stands on the left wing, catches a pass and knocks down a three-pointer. She waits there for a brief moment and then repeats the action.

Her shooting form isn’t picture perfect — her right elbow sticks out just a bit on the release — but her accuracy and consistency make up for it.

Holesinska nails her next two attempts from behind the arc, and the ball barely touches the rim.

She isn’t surprised by this feat at all. Instead, she just blows a bubble with her gum and continues her warmup routine.

She has done this before, and she’ll do it again.

“She’s a really good shooter,” Illinois women’s basketball head coach Matt Bollant said. “When we do our statistics, she’s one of our best kids, and has been one of the best kids since I’ve been here, even as a freshman.”

Holesinska has made 45 three-pointers this season and is shooting 90.5 percent from the free throw line. Illinois’ starting guard has only missed four shots from the charity stripe all season.

But before she became Illinois’ top perimeter threat, Holesinska played a different sport nearly 5,000 miles away in her home country — the Czech Republic.

“I played tennis first,” Holesinska said. “My dad plays tennis, so that’s why he wanted me to play tennis. But I honestly hated it.”

The freshman said she didn’t like being by herself and longed to be a part of a team.

She remembers first playing basketball in elementary school when she was seven, and she hasn’t put the ball down since. Holesinska doesn’t remember who taught her how to shoot, but said that she always shot from the outside because she was little.

Years later, Holesinska hasn’t experienced any major growth spurts — she stands at just 5-foot-9. But after hundreds of hours of practice and thousands of shots, she has found a way to impact a game that is usually dominated by taller players.

Holesinska is a member of the Czech Republic National Team, but that isn’t her only noteworthy accomplishment.

Back home, Holesinka won three national titles with her club team, BK Brno. She also took home a silver medal at the 2013 U-16 European Championships. The following year, her squad missed the podium, finishing fourth at the U-17 World Championships, but she averaged 11.1 points and 2.7 rebounds per game.

By the time she finished high school, Holesinska had started thinking about playing in the United States. She had several American schools recruiting her, but Illinois stuck out because her former club teammate, Jenna Smith, had also attended.

Upon graduation in 2010, Smith was both the Illinois’ all-time leading scorer for women’s and men’s basketball with 2,160 points. Smith’s record still stands, and she is Illinois’ only female to eclipse 2,000 points in her career.

Aside from her offensive expertise, Smith also holds the women’s program records in rebounds, blocked shots and double-doubles. She was drafted by the Washington Mystics in the second round of the 2010 WNBA draft, but eventually ended up taking her talents overseas.

Smith is now retired and works as an assistant coach at Indiana State, but she still remembers meeting Holesinska after signing with BK Brno in 2014.

She said that Holesinska was the only one who spoke some English and even knew American slang. Holesinska told Smith she had learned from watching American movies and TV Shows.

Smith said that language and Holesinska’s interest in America helped them become good friends. She would joke and call Holesinska, “American” and encourage her teammate to pursue a career overseas and come visit her in the States.

“(She told me) ‘Yeah I want to go to college in America. A lot of my friends think I’m crazy to do that, to move so far away from home,'” Smith said. “And I was like, ‘Girl, you should go. It’s like the best experience of your life.’”

A couple years later, Smith’s and Holesinska’s conversations turned into reality after a chance encounter with Bollant.

At the time, Illinois’ head coach didn’t even know who Holesinska was.

He traveled to the Czech Republic to see sophomore Jaelyne Kirkpatrick play for the Canadian National Team. He said he went there with the intentions of recruiting additional players besides Kirkpatrick, and after seeing Holesinska’s ability to shoot the ball, she quickly became one of the players on his radar.

Bollant knew it would be a big transition for Holesinska to move to the U.S. But the potential lifestyle and academic challenges did not hinder him from wanting her on his team.

It was then that Bollant started recruiting Holesinska. She came on an official visit with her dad that was paid for by the University, according to Bollant.

“That was a good night,” Bollant said. “I knew right away she was going to be fine in the classroom. She’s a smart kid. She just really liked it, and then she said she wanted to go back home and talk to (her) mom.”

In addition to talking to her family, Holesinska also reached out to her old teammate.

Smith said she told Holesinska she would make an impact right away at Illinois and enjoy playing on a Big Ten stage at the State Farm Center.

Smith remembered being in Italy when Holesinska reached out to her about Illinois.

“I think what made her comfortable was knowing that I went there,” Smith said. “She trusts me and I trust her. I was like, ‘You’re going to love Champaign.’”

A few days after her official visit, Holesinska sent Bollant a Facebook message committing to Illinois.

She said she still gets homesick and hasn’t fully adapted to American culture.

“It was hard, first of all, because of the language,” Holesinksa said. “I thought I knew English really well. But then when I came here I was like, ‘Probably not.’ And food, it’s a little different. I think it’s worse, honestly. Everything is fried.”

Despite what Holesinska thinks, Bollant said her English has improved since coming to the U.S. But for a person who already knew three languages, learning a fourth wasn’t too difficult.

“(I can speak) Czech, English, Russian, and German,” Holesinska said. “We learned it at school.”

But regardless of language, Holesinska has let her game do the talking during her freshman campaign. She is averaging 11.7 points per game in the Big Ten — third most on the team — and despite an up-and-down season, she has had a handful of standout performances.

In a home game against Rutgers that Smith attended on Jan. 7, Holesinska drained a career-high five three-pointers on her way to a career-high 21 points.

Since then, Holesinska has matched her career-high in made three-pointers twice.

“I hadn’t seen her since I left,” Smith said. “It just brought back so many memories. She’s grown up so much. I’ve known her since she was 16 and she’s at my alma mater, wearing No. 13 and just playing so well.”

The number connection comes from when Smith joined Holesinska in the Czech Republic as teammates. Both favorited No. 13; however, Holesinska had to give it up to Smith.

But now at Illinois, the roles have been reversed and Holesinska sports the same No. 13 jersey that Smith wore when setting her Illini records.

“Her high IQ and the love of the game, you don’t find that a lot nowadays,” Smith said. “Some people just like the game. She genuinely has the passion for it.”