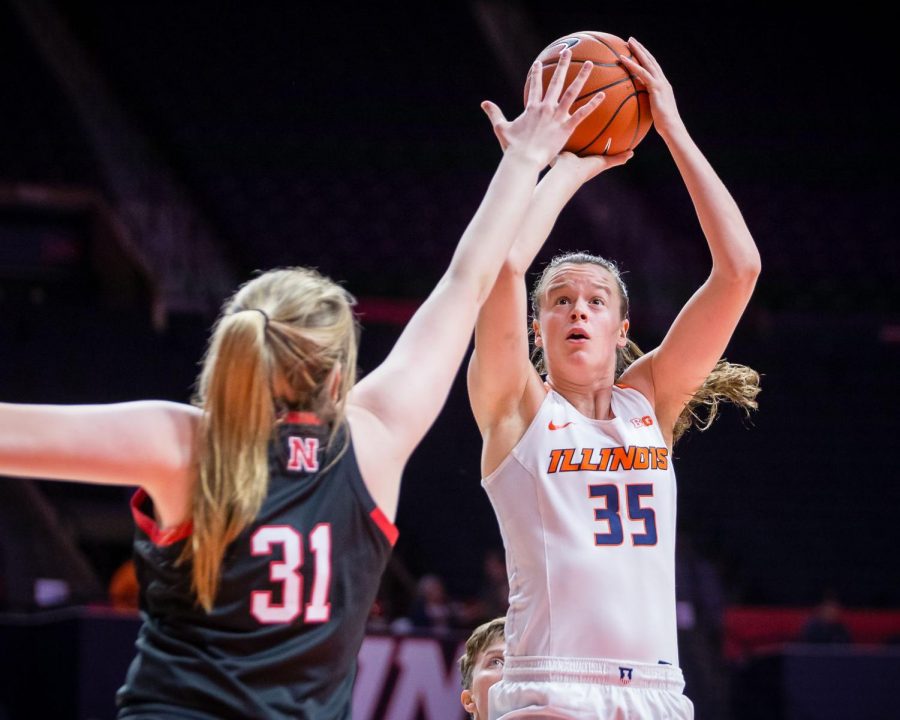 Illinois forward Alex Wittinger shoots the ball during the game against Nebraska at the State Farm Center on Jan. 17. The Illini lost 77-67. Illinois will be playing Ohio State on Thursday in hopes of breaking the Big Ten losing streak.

Following a hard-fought 64-56 loss at the State Farm Center against Northwestern, the 9-11 Illinois women’s basketball team looks to right the ship against 8-10 Ohio State as they travel to Columbus.

After holding the lead for the first three quarters of the game, the Illini allowed the Wildcats to heat up, starting with a buzzer-beating three to end the third quarter. Northwestern then went on an 18-0 run, which shell-shocked the Illini, as they shot 2-20 in the final quarter.

“I thought we played really focused in the fourth quarter defensively,” said Northwestern coach Joe McKeown. “We were on point with our matchups and where we wanted to go along with rebounding. A tough, hard fought game in the Big Ten.”

Though it was a tough pill to swallow, the Illini players were ready to focus on Ohio State following the Northwestern loss.

“I don’t think it’s tough to move on,” said junior guard Brandi Beasley. “You can’t dwell on a loss, you just got to keep getting better. I mean it hurts, but we have to continue to learn from our mistakes and continue to grow.”

The lack of defensive boards in the second half of the game led to the undoing of the Illini. The Wildcats had a margin of 10 plus points on the glass during that span, led by senior Pallas Kunaiyi-Akpanah’s 11 rebounds.

After the game, Illinois head coach Nancy Fahey’s message to the team was short and to the point.

“I wasn’t happy,” Fahey said. “It was a message of the boards; they had 21 second-chance points. It was a barrage in the third and fourth quarter, but was a winnable game. That’s what the message was.”

Illinois will be happy to put the Northwestern game in the rearview mirror, as Ohio State presents its own set of challenges.

The Buckeyes are riding high, as they pulled off a road comeback win on Monday, taking down Minnesota 65-55.

Ohio State went on a 16-0 run in the fourth, led by freshman forward Aaliyah Patty as she ended the night with a team-high 20 points.

Patty filled in for fellow freshman Dorka Juhasz, who has been out the last two games. It’s worth wondering whether or not Juhasz will suit up against the Illini, as the Hungarian leads the team in both points (12.1) and rebounds (8.3) per game.

Ohio State had previously dropped two consecutive Big Ten games prior to the Minnesota game, one of which was a 70-57 loss to Maryland, it was evident Juhasz’s production was sorely missed.

Senior Alex Wittinger’s defense will be tested on Thursday, as she will likely be matched up against the freshman phenom should Juhasz play.

Wittinger has racked up 53 blocks on the season and averages 15 points per game, thanks to a plethora of post moves and a smooth jumper. The senior has shown she can score in bunches, regardless of the defense in front of her.

Against Iowa, Wittinger was not intimidated by Megan Gustafson, the Hawkeye’s force in the middle who averages over 20 points per game and has tallied 66 blocks on the season. There were numerous times during the game where Wittinger splashed jumper after jumper with Gustafson tightly contesting her shot.

Wittinger and the team will be tasked with stopping the Buckeyes attack and picking up their second Big Ten win of the season at 6 p.m. on Thursday in Columbus.