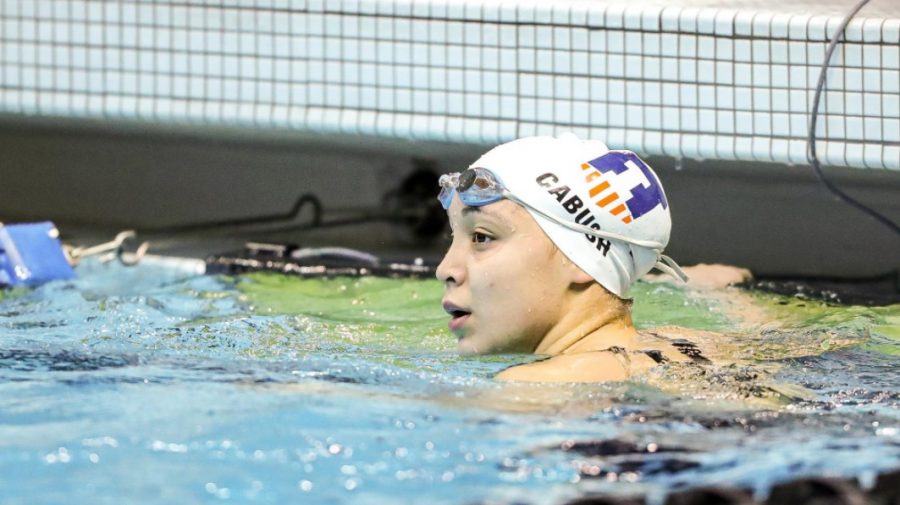 Junior Ashley Cabush waits in the water after one of her races during the meet against Purdue on Saturday. Cabush placed first in two of her events.

After nearly 11 months, the Illini women’s swim and dive team has finally returned to competition and faced off against Big Ten rival Purdue.
This weekend, the team traveled to West Lafayette, Indiana, for the Purdue Invitational to start off their shortened 2021 regular season, which will consist of conference-only meets.
The Illini fell to Purdue at this first meet, 173-122, but a few Illini swimmers earned first-place finishes to start the season.
Head coach Sue Novitsky, entering her 21st season, recognizes how special this year is compared to others for many of her swimmers.
“For most of them, they haven’t competed since last February, so I just wanted them to come in and know we have a gift today,” Novitsky said. “We have an opportunity to step up and challenge ourselves as a team and compete against Purdue, so let’s not waste this.”
This first meet was initially planned as a dual meet that was supposed to include Michigan State, but they couldn’t make the road trip due to COVID-related issues.
Senior Gabrielle Loeck understands how different this eight-week season will be and recognizes the challenges many must overcome, knowing that their final season could end at any moment.
“I wake up every day knowing that something could happen like a corona issue and my season could be done, so I don’t have a lot of time left,” Loeck said. “My dad actually sends me inspirational quotes once a day to keep me going, and it’s actually helped a lot because it has been such a mentally hard year already without being able to have meets in the fall and practicing all the time. It’s pretty easy once you have all your teammates behind your back with you as long.”
Novitsky shared that it’s a huge challenge for the team knowing that COVID is a big deciding factor on the season’s fate, but she’s very impressed with how well her team overcame these challenges while being separated.
“We were able to get back to our routine and said we’re going to make the most out of these next eight weeks until the Big Ten Championships, so that’s what we’re doing. We’re here,” Novitsky said.
At the Purdue Invitational, junior Ashley Cabush finished first in her 100m and 200m freestyles with times of 51.77 and 1:51.34, respectively. Sophomore Kaleigh Haworth also finished first in her 200m individual medley with a time of 2:09.33.
Newcomer freshman Cara Bognar also took home some first-place finishes in the 200m butterfly and 500m freestyle with times of 2:02.56 and 4:59.59, respectively. She also finished second in the 1000m freestyle with a time of 10:16.89.
Sophomores Athena Salafatinos and Isabelle Guerra both finished second in their 100m backstrokes and 100m butterfly events with times of 3:38.04 and 57.23, respectively.
Freshman diver Taylor Michael finished second place in the three-meter event and third place in the one-meter event with scores of 249.98 and 242.63, respectively.
Freshman Lily Olson also had a notable debut in the 200-butterfly event where she placed third place with a time of 2:06.58.

Illinois will travel to Lincoln to compete against Nebraska on Friday and Saturday in their next meet.